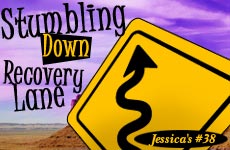 Jessica thought she was fine with the breakup and then -- kaboom! -- the mourning period hit.

There is some consolation in being thought of as "brave" in the face of adversity. Perhaps it’s a quality underestimated in these cynical days. We've all seen the historically revisionist movies popular today. In the midst of battle, even the bravest soldiers Mel Gibson plays are really scared out of their wits.

"Jessica, you are doing soooo well."

I'd heard it a dozen times the week after Rick and I parted ways, and each time I would smile valiantly and say, "Well, of course, I am a little sad... but I really am fine..." and then skip off like Sally Field down the Spunky Gal path.

Then, Alison and I went to the movies one night and, as we were going down the loooong escalator at the Esplanade, I absent-mindedly looked forward to telling Rick about a scene in the movie I knew he'd find funny... and then it hit me: Rick has no place in my life.

And when I say "hit” me, I do mean impact with physical force. It felt like the wind had been knocked out of me and I had to resist the urge to double over. The "Gidget Breaks Up" period had ended abruptly.

"Are you okay?" Alison said, turning to look at me with alarm. "You look like you're about to throw up."

"I just... I just..." I stammered, mortified and confused by the emotional maelstrom that had so suddenly overtaken me. "I just realized... Rick is not part of my life."

I knit my brows and blinked back tears, humiliated at having to fight off a melodramatic scene in the Camelback Esplanade shopping plaza amidst teeming hordes of teenagers and yuppies.

The 'Gidget Breaks Up' period had abruptly ended.

Alison shuffled me off to the car and we zipped home, where I promptly fell apart for the first time since my return from the Red Rock rupture.

"I am so disgusted with myself," I said, curled into a ball in the corner of the couch, hugging a cushion for comfort. "I've been fine. Fine. And now -- SNIFF -- look at me!"

Alison was compassionate. "Jess, don't be so hard on yourself. You were seriously close to marrying the guy. If you really were little Miss Stoic-in-the-Face-of-Adversity forever, I'd have questioned how deep your feelings for him really were."

In my typical way, I was crying one second and laughing the next. But I couldn't stop thinking of one thing: Life was moving forward and Rick had no role in it. The finality of it all was crushing.

It wasn't that I had lost sight of why we weren't together. I just didn't know what to do with the vacuum I felt.

"Can't you still be friends or something?" Alison said.

How could we go from serious emotional intimacy to 'buddies'?

I shook my head. He and I had agreed there was no way for that, at least not in the foreseeable future. How could we go from a level of marital hopefuls to just being "buddies"? How could we get on with our respective lives if he or I were always there, ready to pop out from behind a curtain with a free Saturday night?

"What about the office?"

Fortunately, according to information supplied by Rick's colleague that I'd encountered in the parking lot the day before, Rick has been spending a lot more time lately in the company's Tempe branch. I didn't know if he needed its production facilities, or if he did it to avoid seeing me. In either case, I was grateful.

As for my own job, to call it "unproductive" would be too generous. Hearkening back to collegiate coping mechanisms, I'd taken to closing my office door and writing maudlin free verse:

I want to ignore
that your name and presence creep into my mind
between once and a hundred times a day,
that for twenty minutes I am
immobilized by grief,
missing you,
confused by what we've done.
But then for four hours,
you're barely there
and I am
functioning
highly,
the way an accident victim
gets applauded for walking ten steps.
And sometimes you're there
but I am barely conscious of you
like music playing softly in another room.

Has an appliance
become
a connection
to me?
And does it seem
to beckon,
promising a return
to normalcy,
to us,
even if,
in more logical moments,
you know that
us
is something that doesn't exist anymore.

"Well, this morning, I was Gidget," I told Rina when she called to check on me, "but then this afternoon I was Camille. Tonight, thankfully, I feel a bit more like Jessica."

She laughed. "That must be a relief."

Admitting I was suffering was almost as tough as the pain itself.

"Ooooh yeah," I groaned. "I keep telling myself that this is something I just need to get through, that time will soothe me. But I still feel so pathetic for taking this so hard. Why can't I just snap back? After all, I was one half of this mutual decision!"

"Oh, Jessica," Rina murmured, "You're not pathetic and you're not really even moping. You're just going through a natural process of grieving. If you keep a stick at your side for months and suddenly it's gone, you're going to miss the stick. And you happened to be in love with the stick."

I couldn't help but laugh. It was a clumsy analogy, but it somehow offered me serious succor. Spunky lass that I am, admitting that I am suffering is perhaps as painful as the pain itself.

Setting the phone down, I sighed deeply. I already felt a dawning realization that I had learned a lot from this mess I had made of my life and Rick’s, but I wasn’t exactly sure what. What sort of cosmic karma do I have coming to me for dragging this thing out and hurting Rick -- when I should have known from the start that the religious issues were too much? I sighed, hoping he was sincere when he said he forgave me.

Would I ever feel for anyone the way I felt about him?, I thought self-pityingly. I flopped back on the couch and put my feet up on the coffee table, knocking off some magazines. I bent down to retrieve them.

They were the bridal magazines that my now-engaged sister Beth had fedexed with the options for maid-of-honor dresses marked by Post-its. I flipped through the fluorescent-flagged pages, noting with increasing dismay the horror inflicted upon bridesmaids. Overpriced horror at that.

Hmm, I thought, surveying the bottle green and tangerine options. Perhaps this was the beginning of my karmic repentance.

Jessica #4 - Carole and the Geek

Jessica #36 - Ring Around the Rabbi

Jessica #58 - The Waiting Game
Near Death Experience Panel
The Western Wall: The Heart of the World
Ask the Right Question: Tisha B’Av
Comments
MOST POPULAR IN Dating
Our privacy policy
Aish.com Is Looking for Great Writers