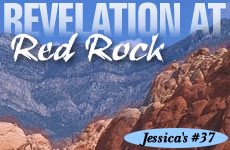 Jessica and Rick come down to the wire. Which will ring: wedding bells or a buzzer signaling the end of the round?

“Oh for pete’s sake, just wear the plum sweater,” Alison said, shaking her head. “And wash off half that makeup. You look like... well, me.”

I turned and looked at myself again.

Rick was coming to get me in 20 minutes, the first time we were seeing each other after a few weeks apart to “think.” I was as edgy and nervous as the worst blind date ever...

“Worse than that,” Alison corrected me.

Somehow, I’d ended up giving myself smoky eyeliner that looked more like I was suffering from emphysema.

“Jess, I think Rick knows what you look like by now,” Alison said, at least approving my outfit -- the fifth I’d tried on. “Shouldn’t you be putting a little more effort into what you want to say to him rather than trying to look like Katie Holmes?”

I smiled and started rubbing at my face, hoping to find my own eyes underneath the kohl.

“You still have no idea what you want, do you?” Alison continued.

“It’s easier to focus on my hair right now,” I replied.

The few weeks “to think” hadn’t helped me so much. I’d basically assembled, disassembled and reassembled the same list of pros and cons I’d been toying with for the past month. I had settled finally on a ridiculous non-decision: I’ll wait and see what Rick has to say!

I somehow managed to reassemble myself and be ready when Rick arrived.

Though I was happy to see him after a week’s separation, I felt no sense of relief. Rather, I felt tenuous and uncertain. Omigosh -- what if he was waiting for me to voice my decision before he made his?!

He opened the car door and we headed north. I spaced out for a few minutes until we were heading west on the Carefree Highway on the northern edge of the city. Before I could ask where we were going, Rick turned and told me that we were going to Sedona, the village in the majestic red rock valleys around Oak Creek Canyon.

I’d already been a few times to the beautiful area that gave new meaning to the term “breath-taking.” It’s a place where you can’t look and speak at the same time. The sheer awe paralyzes you and makes you feel still and small. No wonder dozens of New Age centers had sprung up there. I don’t understand the point of vortexes and crystals, but I do understand why people find there a spiritual resonance.

“I always get clarity there,” Rick explained.

As we passed out of Black Canyon City, I was smiling mildly at a road sign that said “Dead Man’s Wash.” My eyes came to rest on my watch that, I remembered with a wince, was a gift from my ex-boyfriend Andy. He had given it to me as an appeasement prize when I got upset about the lack of formalized commitment between us.

I always jokingly referred to it as “jewelry training wheels” -- a tricycle on the way to a bicycle of real commitment.

I looked over at Rick. He was dreamily looking out the window, moving slightly, in time to the new Sade CD wafting through his car speakers.

A few weeks to think before a big decision...

He had seemed nervous when he picked me up...

He’s taking me on an unexpected road trip, to a beautiful, romantic place...

A maelstrom of thoughts rushed through my head... Was this the way I imagined being proposed to? Did he buy a ring or will he just ask?

And then, a sudden, clear conviction. This whole thing is not right.

I looked at Rick and felt torn in two.

We both knew full well that he wasn’t really interested in Judaism.

He didn’t believe that God is one, the way the Shema declares. He didn’t care whether the Passover seder was matzah or bread. And he didn’t feel the same personalized revulsion at the Holocaust, or the same proprietary connection and yearning for peace in Israel.

Rabbi Ringman and I had discussed how people can come to spiritual turning points in different ways -- and sometimes a relationship can be the catalyst for becoming Jewish. Someone learns about Judaism through his or her partner, it resonates, and he or she ends up embracing it. The Jewish partner is the catalyst, but the embrace is independent.

I wished it to be true, but this wasn’t the case with Rick.

A relationship can be catalyst for becoming Jewish, but that wasn’t the case with Rick.

Rick liked me and he was making a tremendous compromise, a huge sacrifice. It was the sacrifice required for our relationship to move forward.

But sitting there with Sade, I understood that I didn’t want Rick to convert. Certainly not if it was “for me.”

I want a husband who wants to live a Jewish life for himself, not for me. I want my kids to grow up with a father who takes them to synagogue Friday night because he thinks it’s important, not because Mommy (me) gets mad if he doesn’t.

I lifted my eyes toward Rick and felt my heart breaking. Such a gentle, honest, good guy.

But I need things from him that he can never provide.

And I have put him into this unfair position. How horribly selfish of me.

My breathing was shallow. If he proposes and I have to turn him down, I am saying “no” to one of the most wonderful men I have ever known. And worse, I dragged him along on this emotional roller coaster that I never should have bought tickets to in the first place.

I smoothed my hair nervously, trying to find the words to explain, looking for some way to express how sorry I am.

In another few minutes, he had driven down a long road that wound between houses out into one of the majestic canyons. I could see Submarine Rock in the distance. He got out and led me to a long, flat rock, warm from the waning sun.

I want a husband who wants a Jewish life for himself, not for me.

He was talking and I was half-listening with an apprehensive ear.

Please, please, I begged silently, please don’t... how can I stop him?

Apparently taking my flabbergasted expression for hurt, he explained.

“I never knew much about Judaism before and I am glad that I have learned about it. I can understand why it’s so important to you. It’s more than a religion to you. It’s your identity. It forms the way you look at the world. I know you’re not as observant as Rina, but being Jewish is a tremendous part of who you are. And you need someone who can share that with you.”

“If I was a different kind of person, I could try to fake it, even for the rest of my life if I had to. But I can’t. I can’t lie to you, or to God, and pretend to be something that I’m not.”

If I was a different kind of person, I could fake it, even for the rest of my life.

Unable to respond, I started crying. Again, he mistook it for hurt.

I cut him off.

“I know why you can’t do it, Rick,” I said, wiping away tears, thankful I’d taken off the smoky eyeliner. “I know that it’s because you have integrity. And that’s what I respect about you most.”

We sat looking at each other, sadly.

I told him that as much as I wanted it to work, he wouldn’t be the same person if he professed to believing something he didn’t.

We sat there for a long time, watching the sun dip lower in the sky, the effect seeming to set the red canyon stone on fire.

“I owe you an apology,” I told him. “I never should have gotten involved with you. I should have known. It wasn’t fair to you and now we’re both hurt.”

He smiled mournfully. “You didn’t do it on purpose,” he said. “And I think good will come out of this. We’ve both learned that we have relatively unformed ideas about religion. And that you have a strong commitment to yours.”

Rabbi Ringman had talked about how people my age look at Judaism through 13-year-old’s eyes -- the age at which our Jewish education ended.

“There’s a treasure chest in Judaism for adults, Jessica,” the rabbi had told me. “Before you give away the jewels, at least get a fair appraisal.”

Before you give away the jewels, at least get a fair appraisal.

Rick and I sat together until I started to get chilled and, sadly, we drove back to Phoenix. I let myself into my apartment and, in full weepy melodrama mode, pulled out my “Gone With the Wind” video. I sat, crying, immobilized under a blanket as Scarlett made her way through the war, mostly in that same dress, watched Bonnie, and then Melanie die... and then Rhett walk out the door with his famous parting line.

So many people think the movie ends there... but I was watching for the next part. Scarlett, hysterical on the steps, stops her crying and sits up, declaring that she will be okay. “After all, tomorrow is another day.”

Swollen-eyed, I shuffled, blanket and all, into the kitchen for another cup of Moroccan Mint tea. Deep in my O’Hara coping mode, I’d not heard the phone ring. The machine was beeping. I pressed it, listening detachedly.

Her voice is erratic.

Oh no. She’s getting married.

Jessica #65 - Into the Crucible
Don’t Believe in Other Gods Versus God is One
Seeing Without Eyes
Why Shouldn’t We Eat Whatever We Want?
Comments
MOST POPULAR IN Dating
Our privacy policy
Aish.com Is Looking for Great Writers