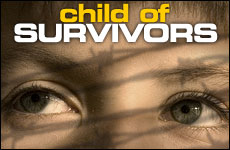 My parents saw in me the totality of their hopes and dreams.

I grew up in Canada, the child of Holocaust survivors. Both of my parents had been in the camps -- my mother in Auschwitz (who witnessed her own mother being shot), and my father (who passed away six years ago) in Mauthausen and elsewhere. He had the tattoo 'KL' (Konzentrationslager) on his wrist, while she had a number on her arm: A17074 ('A' for Auschwitz).

My parents displayed some of the psychological symptoms that are common among the 850,000 who survived the Nazi killing fields: chronic anxiety, fear of renewed persecution, depression, recurring nightmares, an inability to experience great pleasure, social withdrawal, fatigue, an inability to concentrate, irritability, and a hostile and mistrustful attitude toward the world.

Survivors often chose marriage partners who had endured similar experiences, because they believed that only such people could possibly relate to that long nightmare. Interestingly, survivors didn't necessarily know many details of their spouse's experiences; but they felt mutual dependence or protectiveness. Their continued suffering became a means of bearing witness.

I was constantly reminded of my good fortune compared with their deprivation.

I was an only child, adopted at birth after my mother had suffered the added nightmare of bearing two stillborn children, both dead in the womb. As a result, I was a prized possession -- a gift from God, to be cherished and loved, and constantly reminded of my good fortune compared with their deprivation. My parents became totally involved in every aspect of my life, and I felt a tremendous need to succeed and to prove myself.

As a teenager growing up with parents who wanted to be involved in every aspect of my life, it was impossible to have privacy or to have an escape. When I brought friends over, we wound up eating a great deal -- always finishing everything on the plate. This was inevitably followed by a conversation with my mother in the living room. Maybe her interest was accentuated because she didn't have an adolescence, so she enjoyed hers through me. My needs seemed to be diminished in the face of her horrible suffering, which included sexual humiliation at the hands of Dr. Josef Mengele, the 'Angel of Death' who performed the selections on the railway platform at Auschwitz.

It was difficult to exercise independence and challenge my parents' entrenched views. They were more worried, more prohibiting, and more careful than non-survivor parents. They were also outwardly different: they spoke English with a heavy accent, and often broke spontaneously into Yiddish. My father cracked great jokes, but it was often dark humor based on the Holocaust. Here's a sample:

As Hitler's armies faced more and more setbacks, he asked his astrologer, "Am I going to lose the war?"

"Am I going to die?" Hitler asked.

"On a Jewish holiday."

"Any day that you die will be a Jewish holiday!"

While not everyone finds this funny, humor creates solidarity among those who suffered under the Nazis. It creates an incongruity, and draws a line between an in-group and an out-group.

The more I came to learn about the Holocaust, the more I associated with my parents' pain and vulnerability. They would spend any amount of money on me, but none on themselves. I often tried to project myself into their position, imagining myself having a parent or other relation killed by the Nazis, being followed in the street and taunted, rounded up for deportation, arriving at Auschwitz and smelling the crematoria, or taken to the gas chamber. I was jealous of my non-survivor friends who had grandparents; all I had from my dead ones was a name given to me as a reminder, to make up for lost family.

I watched a great deal of TV as a kid, and became excited while watching Nazi war movies. I wanted the British or Americans to win, but still imagined what it was like to wear an SS uniform and have such absolute power over others. I was fascinated by the grotesque photos of the camps.

My imagination was also occupied with my father's persona: I saw him as 'tough', and a good role model. There were heroic aspects of his experience; he built tunnels in the mountains of Austria so the Germans could store munitions. It was, of course, slave labor; but I still felt pride in what he did. This was reinforced when I visited the place myself in the 1990s. It proved to me how and why he could be such an indefatigable worker, but it also taught me that activity -- any activity -- was an opportunity to seem normal.

To get reparations, survivors endured medical and psychiatric evaluations at the hands of German doctors.

My mother always bought the Jewish newspaper, because it was the source of all information concerning reparation payments to survivors. In the 1950s, the German government set up a scheme for payments which involved survivors' undergoing medical and psychiatric evaluations at the hands of German doctors, in order to establish a connection between physical symptoms and Nazi persecution. I can remember being dragged to these doctors and to German lawyers as a child, not quite understanding what this was all for, or why I was there.

In common with many survivors and their children, I have a strong commitment to the State of Israel. Israel is a testimony to the endurance of the Jewish people: it constantly reaffirms their survival. Israel is also seen as the bulwark against another Holocaust, which, many survivors and their children believe, could indeed happen again. My parents raised me to be self-sufficient and success-oriented because they were afraid if I wasn't, I wouldn't be able to take care of myself in case something like the Holocaust occurred again.

It has often been said that "One person can make a difference." We all have to make choices in our lives, and in certain cases small actions can spell the difference between life and death for the persecuted and the hunted. We all know about Oscar Schindler and Swedish diplomat Raoul Wallenberg. Interestingly, only one-tenth of one percent of Europe's 300 million gentiles did something to help Jews. If the numbers would have been a bit larger, perhaps the Holocaust would have never occurred.

Today's world has no lack of "survivors." Terror attacks, natural disasters. The effects are widespread and devastating.

Perhaps some of us have the moral courage to reach out to survivors: some small action to demonstrate identification with their plight, and a desire to help, or at least comprehend their situation. I can testify that it is worth it. Make no calculations when it comes to helping another in distress. In return you will discover the indefinable potential of the human spirit and its resilient nature. A shared understanding of tragedy and victimization brings us a little closer to conceiving the inconceivable, making us all stronger and fuller participants in the human drama.

Based on an address given at the Holocaust Memorial Day commemoration in Northern Ireland.

Dr. Leon Litvack is on the faculty of Queen's University of Belfast, Northern Ireland.