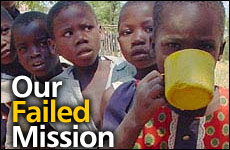 There are a lot worse off parts of the globe that George Mitchell should visit and fix other than the Middle East.

If there has been one thing that all Jews have collectively agreed upon, it is "Never Again." We painfully but proudly proclaimed this little credo after the Holocaust and it seemed simple enough. Who would argue that genocide, the systematic wiping out of a people, race or religion, should never happen again? After the Holocaust, it would seem obvious that any semblance of mass killings would be first on the Jewish agenda.

But this has not been the case, as it was recently pointed out in an article in the New York Times:

January 22, 2009. BERGEN-BELSEN, Germany — Habbo Knoch, who runs the new Bergen-Belsen Memorial at the former concentration camp, invited various scholars and museum directors to a four-day conference here last week called "Witnessing: Sites of Destruction and the Representation of the Holocaust." He asked a question one evening during a break: "Will people in 20 years look back and say we built a museum that focuses on Nazi genocide while Darfur was happening? Will they ask whether anyone raised this issue?"

A very poignant question indeed. We have done a great job of telling the world about the details of the Nazi genocide, creating all kinds of memorials and reminders of it, but have we forgotten to ensure that it really never happens again to anyone? Not just Jews, but anyone from any nation?

We have abandoned our best offense -- pointing out to the world that it uses the Palestinian issue to avoid the real tragedies taking place.

I would suggest that one reason for this is Israel. We have allowed our message to be muddled and hijacked by the legitimate issue of Israel's survival and the threats from her enemies. In our attempts to defend ourselves against the myriad of accusations against the Jewish state, we have abandoned our best offense -- pointing out to the world that it continually uses the Palestinian issue to avoid the real tragedies that are taking place.

While we got a daily tally of how many Arabs were killed in Gaza, in great detail and with graphic photos, when was the last time you heard or saw the press focus so much attention on Zimbabwe, like this little tidbit from The (UK) Guardian in July of 2007:

Women in Zimbabwe live an average of 34 years and men manage just three years more, half of the life expectancy of little more than a decade ago. President Robert Mugabe's destruction of his own economy as he fights to hold on to power - with inflation running above 10,000%, power and water cuts a daily reality, shops rapidly emptying of food and the grain harvest expected to fail yet again after the seizure of white-owned farms and drought -- has played a large part in the surging number of deaths. Millions are underfed, weakening immune systems and bringing on Aids. Few can afford the drugs to treat the illnesses that the disease brings on, even if the medicines are available which, increasingly, they are not. Many of the country's doctors and nurses have left for South Africa or Europe. The World Health Organisation estimates that that lethal combination is claiming 3,500 lives a week in the former British colony. The World Food Programme says 4 million Zimbabweans, one-third of the population, will need food aid this year.

Even the Arab world is not immune and cannot escape the curse of the Palestinian distraction, as the New York Times reported on January 22, 2009:

At Arab Gathering on Development, the Talk Is All About Gaza

KUWAIT — Two and a half years ago, a group of Arab leaders decided it was time to try to set aside their political differences and deal with what was ailing their countries: widespread illiteracy, ineffective schools, unemployment, inadequate water and food resources. So they called for an extraordinary summit meeting to be held in Kuwait City this week. The plan was for the 22 members of the Arab League to agree on concrete ways to improve the lives of their 330 million citizens. Instead, they bickered over how to handle the Gaza crisis...

When the presidents, kings and emirs arrived in Kuwait, they were scheduled to discuss regional cooperation to improve education, ease trade and travel barriers, improve food security and lift their citizens out of poverty. But they were barely talking to one another because of differences over how to deal with Israel's offensive in Gaza.

"Yes, military occupation is a serious matter that needs to be addressed," said Amr Moussa, the secretary general of the Arab League. "But backwardness in our societies needs to be taken care of." There was a suffocating sense of despair hanging over the Kuwait meeting as the Gaza crisis eclipsed every other issue. "The Arab ship is sinking," Mr. Moussa said on the first day of the conference.

Prime Minister Fouad Siniora of Lebanon said that Arab universities were collapsing and scientific research was almost nonexistent. By many measures, the Arab world is slipping further and further behind in its ability to compete globally...

Just as the Nazis were so consumed with their hatred of Jews that they were willing to divert needed resources and efforts for fighting the war toward the Final Solution, the Arab world and the world at large are making the same mistake.

It is our job to point that out.

Let's stop playing this game that is costing the lives of millions of innocents who are suffering.

For once I'd love to hear the Israeli ambassador in the UN, when facing the daily ritual of Israel bashing, or Mark Regev when speaking on CNN about Israel, tell them to move on and focus on the real atrocities in the world like Darfur, the Congo, Zimbabwe, Pakistan, Chechnya -- the list goes on and on. We need to stop our knee-jerk defensive reactions for every act of anti-Semitism or anti-Zionism (the two are becoming increasingly hard to differentiate) and simply tell the world to get busy fixing the greater ills in their own backyard; to stop playing this game that is costing the lives of millions of innocents who are suffering. Innocents indeed who did not bring the suffering on themselves through their maddening and blinding hatred like the Palestinians.

For once I want to see a Jewish or Israeli leader tell Obama or the UN or the Arab world or Europe or Jimmy Carter that we have all heard enough about Gaza, the West Bank and two state solutions, as if this were the central issue in our world, and to do something about the far greater humanitarian suffering in our world. There are a lot worse off parts of the globe that George Mitchell should visit and fix other than the Middle East.

What are we going to do to rectify this? When will we Jews take a broader perspective and really undertake the task of being a light unto nations -– which in today's day and age means reminding the world that we are not the problem and that they are in their continued refusal to deal with major atrocities that plague our planet a lot worse than anything going on in Gaza?

We need a paradigm shift in our reaction to global criticism of Israel and thereby truly fulfill our mandate of teaching the world the most basic lesson of humanity -– that real genocide -– not counterfeit claims of it by the Arab world -- must be addressed and fixed. Only then will real Tikkun Olam –- repairing the world -- happen to the benefit everyone everywhere. 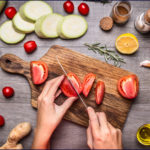