Self Esteem and Tough Love 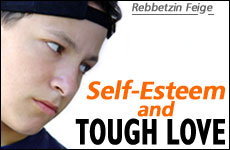 My son thinks he's God's gift to the world. How do I teach him that he isn't without damaging his self esteem?

Dear Rebbetzin,
I know that building up a child's self esteem is one of the most important things we can do to raise a happy and confident child. But what of the child who is over-confident, arrogant and whose self esteem is so high that he feels he should be treated like a king in his own home? My son (the first born of four children so far) is almost eight years old and is making everyone's life at home miserable with his particular demands and pronouncements. At school and at his grandparents they all call him the golden child since he is so well behaved, but at home he is constantly bossing his siblings around. He does get a fair amount of individual time with me and his father since he is put to bed last and has quiet time with us then.

I don't want to put him down, but I can't put up with this behavior either. Please advise.

Building a child's self esteem cannot be achieved at the expense of the parents' obligation to teach children right from wrong and setting boundaries in their formative years. A young child needs to be guided and directed, especially when they are testing the limits.

Note that your son does not exhibit this behavior in school or at his grandparents' home. Clearly, at some level, he understands that it is only in the safe setting of his home that he can act out and "let his hair down."

The goal would be to register your disapproval, to reprimand him, but to do so in a context of acknowledging his admirable essence.

My father-in-law of blessed memory, in raising his five wonderful sons, used the approach of "es pahst nisht", it's not becoming of you. He would extol his sons' virtues, their positive attributes and conclude that given their fine traits, the present behavior was out of line, unbecoming of them and hence totally unacceptable. They felt chastised but not denigrated. Their dignity was left intact.

The goal is reminiscent of a sculptor who was asked how he created such magnificent works of art out of an amorphous piece of stone. He responded that with a vision in his mind of the end product he proceeded to chip away at what didn't belong there until what emerged was the work of beauty. In a sense, all of us who are raising children through challenging and stressful times are at risk of losing sight of the bigger picture, the inherent possibilities and potential.

It's significant that your son can be "a golden boy" in school and with his grandparents. It speaks first and foremost to the fact that his core is good. Secondly, since he subjects only his parents and siblings to his aggressive and inappropriate behavior, it would suggest that at some level there is a desire on his part to be set straight. It appears that implicit in his actions, subtle as it may be, is a cry for help, an expressed need for his parents to assume their parenting role.

Rebuking in a context of "it's not becoming of you," is the most desirable mode.

Arguably, if his parents can achieve this while maintaining and communicating their positive view of him -- rebuking in a context of "it's not becoming of you," that would be the most powerful and desirable mode. Invariably, children hate to disappoint or betray lofty expectations that parents have and nurture on their behalf. Consider the incident of Joseph in the Bible when he was sorely tempted by the beautiful wife of Potiphar. Our sages inform that it was the image of his father at the critical moment that saved him. My husband explained that it wasn't so much the image of his saintly father as the image that his saintly father had of him that gave him the super-human strength to withstand so monumental a test. Joseph knew that his father, Jacob, held him in the highest esteem, and had the loftiest of dreams and aspirations on his behalf. At the end of the day, Joseph was sustained by the power of his father's trust and high regard for his righteousness.

As parents, we would like to cultivate a sense of self esteem and positive image within our children that would escort them throughout their life. One very effective step in that direction would be to catch our children in the act of doing something right. Sadly, our role as guardians of these budding human beings, entrusted to our care, is most often associated with weeding out the negative, observing primarily that which has gone awry. Our focus needs to shift to encouraging the positive, that which they are doing right, concentrating on the laudable behavior.

Examples might be giving positive feedback and noting when:

1) a game played with siblings has been negotiated without incident
2) a phone call miraculously concluded by mom without the usual interruptions
3) a kind word overheard in sibling interactions, from one to the other

4) an item charitably shared
5) a helpful act done -- clearing the table, running up and down the stairs on errands, etc.


In short, we need to actively to be on the lookout for positive behavior. We need to notice and affirm, and hopefully the positive feedback will replace the need for the negative attention that is often sought.

I would also recommend that the reader have a private talk with her son and enlist his help. She might tell him that not only is he the eldest, but a special boy who has made her proud in so many significant ways that, as such, she needs his input into making the dynamics of the family situation work. In Yiddish, the expression is "make the thief into the watchman." Get his ideas and let him have a role in figuring out how to implement them. Empowering him may work for everybody.

We live in stressful and difficult times. I recently heard an Israeli educator quote a great sage of our time who commented that "the street" today presents more challenges to the psyche of the human being in one day than in an entire lifetime of previous generations. Hence, my dear reader, the most effective antidote with which to fortify our children is loads of love -- hugs and kisses interspersed with gentle reminders to tow the line. Child rearing experts suggest that criticism, if it is to be effective, should be doled out like salt and pepper -- necessary but in very limited quantity.

In sum, the baseline formula provided by our sages is, "the left hand should push away but the dominant hand should draw close and embrace." The challenge for all of us is to negotiate this very delicate balance.

Please be advised that the aforementioned counsel is basic and applicable in all situations. There are, however, situations that are more complex than what meets the eye and require more extensive intervention. If the reader's current situation does not markedly improve in a reasonable time frame, I would urge her in the direction of seeking competent professional help. My personal bias is that in questionable situations an objective professional opinion will, at the very least, put a parent's concerns to rest, and at the most, provide invaluable direction.

And, as in all situations, pray -- for wisdom, insight and patience. May God bless you with much nachas.

He's No Einstein
It Takes A Lot Of Faith To Be An Atheist
How Instagram Brought Back This Nostalgic Soup
What Makes Eli Run?
Comments
MOST POPULAR IN Family
Our privacy policy