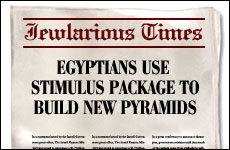 With the Egyptian economy crumbling under the weight of the global financial crisis – the Egyptian Dinar has depreciated dramatically against the US dollar, the bottom has fallen out of the global goat meat trade and the mummy market has been dormant for centuries – the Egyptian government has announced that it is undertaking a "massive public works project unseen since Pharaoh Khufu." At a hastily called press conference in Cairo, Egyptian Finance Minister, Youssef Boutros-Ghali, announced that the government "could not stand idly by, as it has since the New Kingdom ended in 1070 BCE, waiting for the economy to cure itself".

Using flipcharts, Boutros-Ghali detailed his plan to spend $21 billion dollars, creating "four new pyramids and a sphinx," one pyramid outside of Cairo, one in Abu Sur and two in Saqqara (stating that Saqarra had been heavily "goat meat dependant), with the sphinx's location yet to be determined. Boutros-Ghali stated, "Egypt is legendary for its public works, but we have been really coasting on that reputation since we built Amenemhat III." The most stunning announcement is that the pyramid in Giza will be two times the size of the existing Great Pyramid of Giza and will be called, "An Even Greater Pyramid of Giza."

Jewlarious sister station, Al Jewlarious, interviewed several Egyptians, many of whom publicly praised the plan out of fear of retribution against themselves and their friends and families, but quietly showed concern. A Cairo based shopkeeper who asked to remain anonymous, felt that the money should have gone toward a bailout of the antiquated camel transportation industry; meanwhile, an Alexandria-based spice-merchant feared that the funds would ultimately be diverted from the pyramids and "just go to bonuses for irresponsible stone-cutters". Finally, Hassan Bin Al Souri, a flower merchant from Sharm-El Sheik complained on the record, stating, "Isn't it a shame that we can say that Brandon Fraser has done more to promote the mummy industry than President Mubarak?" Then, Bin Said added, "I am going to miss having knees."