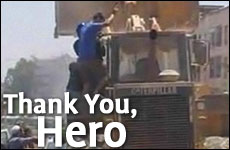 Wednesday's hero helped us realize that education to valor is not some kind of old-fashioned luxury, but rather, it's a necessity of life.

On Wednesday we had a chance to see a hero. What is heroism? A pure moment where education, ideals, and mental preparation come together and prompt a person to knowingly risk his life without considering personal benefit.

Wednesday's hero was educated in a family and in a community that does not tell its sons "the most important thing is to protect yourself" when they join the army, but rather, "the most important thing is that you protect your people." The professional ability, the resourcefulness, and the level-headedness are merely a marginal addition to the bravery and aspiration for victory.

The immediate decision to get on the bulldozer, empty handed, is what distinguishes a hero from any other person.

This soldier, riding his bike in the face of a rampaging bulldozer, decided that he is going to stop the terrorist. The immediate decision to get on the bulldozer, empty handed, is what distinguishes a hero from any other person, a civilian who takes responsibility from police officers who scratch their head or fire shots in the air, mostly in order to calm themselves.

Yet this young man, whom all of us saw getting on the bulldozer, pulling out the security guard's gun, and shooting the terrorist was given the run around by IDF authorities up until recently, until they agreed to let him join the army.

When he was a high school student, he misbehaved at some protest during the disengagement, and our army sages debated whether to recruit him, even though he did not agree to apologize for his acts in his meeting with a mental health officer. As if we have a surplus of young men like him.

It is difficult to educate someone to heroism. It is easier to educate people to show helplessness, to learn legal procedures, and to focus on the rights of the terrorist and his family. Yet it is possible to educate young people in an environment that conveys to them that some things are more important than their own life.

We can and should educate young people that when the moment of truth arrives we must defeat the rampaging enemy rather than step back and wait for someone else to do the job. We need to encourage and promote the schools and communities where the phrases "People of Israel" and "Land of Israel" are uttered without disparagement.

Wednesday's soldier helped us realize that education to valor is not some kind of old-fashioned luxury, but rather, it's a necessity of life – even when you're riding your bicycle, on leave from the army. Thank you, hero.

This article originally appeared on ynetnews.com.
Like What You Read?  Give Jews around the world the chance to experience engaging Jewish wisdom with more articles and videos on Aish. It would make your mother so proud and as a nonprofit organization it's your support that keeps us going. Thanks a ton!