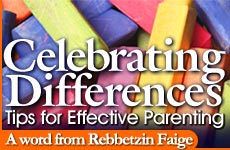 A mother of eleven offers her special tips on raising children.

Some of our readers have requested insights and tips on child rearing. I, like parents everywhere, have researched, soul-searched, agonized, and prayed a lot for guidance in raising children. Thank God, I have eleven very special children, which gives one a lot of instructive experience. There is a Hebrew expression that translates into "what wisdom does not confer, time will."

At the end of the Book of Genesis, Jacob blesses his twelve sons on his deathbed. Each blessing is distinct, conferred more as a description of a given son's particular strength and concomitant responsibility, than as an overall wish for his well-being. The individuality of each son emerges clearly, indicating a role for each in shaping the totality of the Jewish people.

From our inception, Judaism celebrates and applauds differences and diversity.

RESPECT THE INDIVIDUALITY OF EACH CHILD

As a mother of eleven, I have often been approached by mothers and fathers for advice and heard them verbalize some frustrations at the lack of generic tools for parenting. What works with one child, fails miserably with another.

Most recently, I was struck with a perfect example of this while being escorted to a speaking engagement by a mother and her six children. During the drive from the airport, I was surprised by how well-mannered and respectful the children's interactions were with each other, as well as with their mother. Yet, I could glean from the various conversations that the children had very different personalities.

When I remarked on this, the mother, Nancy, told me that she had a rude awakening when her second child was born. Her first child had been what you'd describe as a "perfect" baby -- calm, serene, a real pleasure. The second child was easily agitated, temperamental, sensitive and generally difficult. Those very effective parenting techniques she employed with her first child became totally ineffective with her second. Then came child number three, four, five and six.

Nancy committed her energy to the development of each child's individual potential.

After reading many books and seeking out networking and professional support groups, Nancy figured out that she'd be a more successful parent by celebrating her children's differences rather than imposing upon them identical preconceived notions and expectations. Her newfound openness allowed her to identify each child's personality traits -- strengths and weaknesses -- thereby enabling her to formulate realistic expectations for each child.

Nancy realized that comparisons amongst her children were irrelevant. She committed her energy to the development of each child's individual potential. She sought out extra-curricular activities and encouraged avocations that suited each child's temperament -- art and music for the creative one, supplementary learning for the scholastically inclined, and social opportunities for the "people person." In short, she worked hard to provide opportunities for each one of her children to shine, and in so doing helped each develop a healthy self esteem.

Every human being yearns for a positive self-image. If a child senses he is a disappointment to those who should love him unconditionally, in desperation, he might seek approval elsewhere, often with negative and destructive peer groups, for example.

Parents are powerful influences in their children's lives. They need to be conscious that children see themselves as reflected in their parents' eyes.

Jamie, a bright, good-looking young man, tearfully described to me how his father's approval had eluded him throughout his 20 years. His father's steady stream of criticism and scant kind words had bruised and battered his psyche until there was little left to his self-esteem. He is depressed, unmotivated and without any direction. He has already been in therapy for a long time and the road to emotional health seems long and arduous.

Children see themselves as reflected in their parents' eyes.

On the other hand, I was blessed with a father who contributed in every way possible to developing my positive self worth. Memories of overhearing my father speak glowingly of me to his friends during late night chats still warm me. Positive feedback offered to a child, either directly or indirectly, is essential to raising emotionally healthy children.

For fellow travelers on the journey to effective parenting, the following points might be considered:

Being Inspired by Judaism

Entering the Palace of the King
How to Become Immortal
Judaism and Mental Health
Jews and the Chocolate Trade
Comments
MOST POPULAR IN Family
Our privacy policy
Aish.com Is Looking for Great Writers