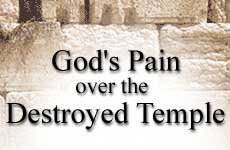 Allegorical sources, not be taken literally.

When the Holy Temple was destroyed, there was a wailing voice heard throughout the whole world. The Ministering Angels said to G-d, "Master of the Universe, do You have such emotions of sadness? Isn't it written 'Splendor and glory are before You?' "

G-d answered: "My House is destroyed, and My children are manacled in chains. Shouldn't I be suffering?"

From the day that Jerusalem and the Holy Temple were destroyed, there is no joy before G-d... until Jerusalem will be rebuilt and the Jewish People will return to it.

It is precisely at times of closeness - i.e. prayer - that G-d feels the most suffering over the destruction of the Holy Temple.)

Rebbe Yosie said, "I was once traveling on the road, and I entered into one of the ruins of Jerusalem in order to pray. Elijah the Prophet appeared and waited for me at the door until I finished my prayer.

"My son, what sound did you hear in this ruin?" he asked.

I replied, "I heard a divine voice, cooing like a dove and saying: 'Woe to the children, on account of whose sins I destroyed My House, burnt My Temple, and exiled them among the nations of the world.'"

Elijah said to me, "Not only at this moment does G-d say this, but He exclaims it three times a day."

From Ruins to Hope
Should I Break Up, Get Engaged or Keep Dating?
Time Is Your Precious Commodity
A Constant World in Flux
Comments
MOST POPULAR IN Tisha BAv
Our privacy policy