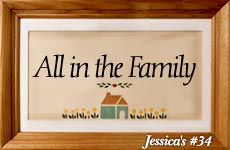 When a family function turns into a revival event, Jessica sees that today may look entirely different in 20 years.

Rick's knuckles were white on the steering wheel and his lips were pursed. I wasn't saying anything. Finally, at a stoplight, he took a deep breath and turned to me.

"Jessica, I am really sorry. I had no idea he would do that... I can't imagine how uncomfortable it made you," he said. "I just can't apologize enough."

We'd gone to a party for Rick's nephew Ethan. I'd still never figured out exactly what we were celebrating, but apparently young Ethan had done something in his church youth group that merited an open house of sorts. A Presbyterian bar mitzvah? Alter boy graduation? I wasn't sure.

"It's not your fault," I said, feeling as mortified for him, as I was feeling about myself. "I have obnoxious relatives, too. Look, in his own way, he was trying to help me."

"What do you mean?" Rick probed.

"Well, from his perspective he was honestly worried about my future, in the very long term," I explained generously. "Of course it was totally inappropriate, but I do think he was trying to help."

"You're incredible," Rick said. "Such a great attitude."

--Oooh! Score one for Understanding friend!

We smiled at each other for a long moment until I screeched when he almost drove through a red light. Once my heart started beating again, my thoughts wandered. I did mean what I said, but I was downplaying how today's incident had made me feel.

It was the most polite way I've ever been told to go to hell.

During this open house, I had been innocently cracking open a can of Diet RC (no Coke, for some reason!) when Rick's brother-in-law Pete came over and started a genial conversation with me. We spoke for a few minutes about nothing of import... and then he asked me a too-casual question.

"So Becky tells me that you're Jewish," he said, referring to Rick's aunt.

A little startled, I nodded, warily.

"Jessica, I don't mean to be disrespectful, and I know the Jews are good people, but I wonder how much you've thought about things?"

Things? This isn't really happening, I thought, staring, disbelieving, as Pete explained to me that, without accepting Jesus as my lord and savior, I was going to be condemned to hell.

It was perhaps the most polite way I've ever been told to go to hell. (Or at least informed that's my final destination.)

"Uh, Pete..." I tried to calmly interrupt, too shocked to register anger. "I respect your religious beliefs, but I have to ask you to respect mine."

Somehow, within a few minutes, Rick's sister saw what was going on and carted Pete off while Rick steamed beside me. An odd tension followed and I was happy when we finally left.

Obviously, Pete's missionary assault riled me. It was so disrespectful and inappropriate, almost comically so. Yet in a strange way, I respected Pete's views. He was at least consistent. After all, in his worldview, I really am going to hell unless I am "saved." So how could he not try to get me to see the light?

Come to think of it, if I really believed I could save someone from fiery pits of hell (where everything is sold at retail), wouldn't I try?

But there's still something about Christianity that skeeves me out. In present company, I'm just not able to admit it.

If I believed I could save someone from fiery pits of hell, wouldn't I try?

I turned my attention to Rick. "How is it," I asked aloud, "that there is a universal understanding that Jesus looks like a hirsute version of every blonde movie star? I mean, he probably wasn't blonde. He was Jewish, for pete's sakes. He probably looked like a scraggly Paul Reiser."

Boyfriends learned always to fasten their seat belts when I began a sentence with their names. It was a signpost: Important Question Ahead. Pay Attention and Respond Appropriately.

"About what he did today? Of course not. It was obnoxious!"

"No, I mean about how I need to accept Jesus or I would go to hell."

He looked at me strangely. "Why? Are you thinking of becoming born again?"

My jaw dropped and then I realized he was joking. "I'm serious," I scolded.

He didn't look so sure, and he caught the concern in my eyes.

"Look, Jessica, I've never really given much thought to eternal damnation. But when you ask me, yes, I believe you're fine. You're not going to hell. Or, at least, if you're going to hell, I am too, so we'll be there together

In discussing it further, I realized that Rick and I had something else in common: poorly-defined religious identities.

It's funny. Rick considers himself "nothing, really." He's what you'd call a secular Christian. Yet when you come down to it, his ideas about the world and about God come from Christianity. He goes to church with his parents and, he said, assumed he'd send his kids to Sunday school -- not out of devout belief but because he thinks it's good for the kids.

Rick and I are probably equally observant, but I would never describe myself as secular.

We are probably equally observant. I go to synagogue a few times a year, largely for social or family reasons. I am adamant that my kids would go to Hebrew school. After all, if I had to miss ballet lessons on Thursdays, they can, too. Yet I consider myself strongly Jewish, not secular and certainly not "nothing." Although Rina and Steve may be more observant than I am, I would never consider myself "less" Jewish. And neither would they.

"You're taking a rather superficial approach on this," Rina said when I related my observations to her later that night. Rina was what my mother would call a "Generalissima." She had a master's degree in education, but her real skill was the ability to look at a problem, break it into tiny bits, solve them all, and reassemble it in time for dinner.

Even when Ari, Sarah and the baby were screaming, Rina usually appeared calm. As we talked, she was collating papers for some consulting work she'd done for a pre-school, was rocking the baby's bouncing seat with her foot, and listening to me with razor-sharp precision.

"Multi-tasking, thy name is Rina," I said.

Her thoughts were focused, though. "You have to realize that your religious ideas and values may not be fleshed out now, at 27 and single. But you can't say where you're going to be in 10 years or 20 years."

"What if Rick suddenly became churchy on you at 40?" she asked, telling me about a friend whose husband, always a pretty non-religious kind of guy, had become increasingly interested in traditional Judaism after his father's death. The wife had to go along with him. And their agnostic neighbor who became born again after recovering from cancer.

You can't say where your religious values are going to be in 10 or 20 years.

"When you walk through life, different events stir parts of you in ways you wouldn't have anticipated," she said. "I can guarantee that whoever you're with is going to change over the years. His religion may be unimportant to him now, but it might be important in the future. That's why you have to start out as much on the same page as you can."

"Okay, so we'll let the kids choose for themselves," I argued, playing devil's advocate, for lack of a better argument.

"Jessica, you just have to be realistic about it," she said. "In America, Jews are about 2 percent of the population. By the time they're through with college and in the working world, the odds are overwhelming that they'll marry someone non-Jewish. You're putting them in a demographic pool that almost guarantees it."

It's more than that, though, she said.

"Letting kids ‘choose' leads to horrible confusion. This is not like mix ‘n match clothing. Kids' brains get scrambled by trying to be all things to all peoples -- and they end up a hodgepodge of nothing."

She punctuated: "And inevitably, kids feel like they have to pick between one parent, or one extended family."

"The funniest thing," she continued, "would be if the kids really chose! How would you feel if the kids grew up and started going to church with Uncle Pete, and came home to tell you that you have to be baptized or you'll burn in hell? Or how would you feel if they become religious Jews – how happy would they be with a mother who intermarried and a father who's not Jewish?"

On the outside, I chuckled, imagining the chaotic family dinners in either case. But on the inside, my heart sank.

What if your kids became religious -- Christians or Jews?

"Look, if your priority is raising Jewish kids, then you need a Jew to do it with."

That night I soaked in the tub, thinking.

I heard the phone ring, but let voice mail get it. When I checked later, Rick was asking where I was and then decided to serenade me, singing "Walkin' After Midnight." I smirked, thinking how great he is.

The phone rang again and I saw Rick's number on caller I.D. I didn't answer it.

Jessica #10 - Platform Shoes and A Scowl

Jessica #64 - Fast Forward
Near Death Experience Panel
The Western Wall: The Heart of the World
Ask the Right Question: Tisha B’Av
Comments
MOST POPULAR IN Dating
Our privacy policy
Aish.com Is Looking for Great Writers