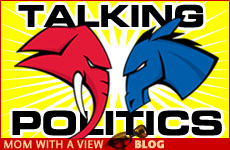 Why is it next to impossible?

Have you ever tried to have a political "discussion" with friends? Impossible, right? Passions run high, invectives are hurled. Civility and logic seem to have taken leave.

Why? What causes otherwise rational human beings to be so emotionally blinded when it comes to politics? Why can't both sides have strengths (Yes, believe it or not everyone has some) and weaknesses (Yes, your candidate has some of those also!)? My husband and I have been puzzling over this question as we endure a particularly nasty presidential campaign.

Yet this attitude is not limited to politics. What about sports? How do you explain the amount of time, energy and emotion invested in a local team? In England, fans have been known to brutalize opposing fans after a soccer game. People base their happiness on how "their" team fared over the weekend. I know of a very bright businessman who goes to every Lakers game -- home and away; they are the repository of his deepest emotional investment. And if you went to the wrong school and are rooting for the wrong team…

How do we explain these reactions and attitudes? I think I may have a small insight into them based on a totally unrelated experience I had recently.

My daughter in Israel has a good friend who recently gave birth to her second child. Being a good friend herself, my daughter tried to be helpful to her. She visited her in the hospital, she baked for the Shalom Zachor. She made them Shabbos dinner for when she returned home. Her grateful friend mentioned that her parents were coming to Israel soon and would be happy to bring her anything she needed for her baby.

Being sensitive to people's packing needs, I filled a (large) Ziploc bag with a few items -- 2 sweaters, 1 hat and 1 jacket. That may sound like a lot but they were for a five-month old baby so you can picture the size of the clothing.

Her friend's family was extremely gracious. "I'll take what I can," said her mother. "My husband will bring the rest when he comes later."

"Great, thank you," I said and drove it over to her home.

Being cramped for space, the mother in the end only had room for one sweater. (One sweater? Picture if you will, dear reader, the size of that sweater for a five-month old! It could have fit in her pocket, but never mind…) I was a little surprised but there was still the father. The weather was starting to get chilly in Israel so my daughter was eagerly awaiting those warmer garments.

Then the father called. "I'm terribly sorry," he said quite sincerely, "but I just don't have any room." (May I remind you again of the size of the items?) "Please come by and pick up your stuff."

I was outraged. After all my daughter did? After they offered? Now I had to schlep back to pick it up! I couldn't get over it; I was really annoyed and aggravated.

Until my husband pointed out that I seem to have invested this situation, this relatively small incident, with a disproportionate amount of emotion. The minor nature of the frustration didn't seem to merit the emotion involved. It was a level of indignation that should be reserved for crimes against the Jewish people.

What was going on? And then I saw it. This wasn't about the particular details of the story. This was the place where I poured ALL my anxieties and frustrations -- worries about a particular child, concerns about our financial state, annoyance with my spouse (if I had any!). All were directed at this safe outside target. I could be angry with this family and calm with my own. We could even be united by our shared outrage.

Instead of directing our anger inward, we have found a safe external object.

This, I think, explains sports and politics. All our hopes and dreams, frustrations and anxieties can be displaced onto our team or candidate.

Instead of yelling at our boss or employees, instead of losing it with out spouses or children, instead of directing our anger inward, we have found a safe external object. And so, the emotion is disproportionate, the vehemence against those with whom we disagree a distortion. Yet it's better than the alternative.

It's not necessarily bad to take advantage of this opportunity for displacement. But perhaps with a little perspective, with a little understanding of its roots, we can learn some balance. We can root for our team without the need to disparage supporters of the opposing team. We can campaign for our candidate without spewing insults at the other side.

Expressing aggression and other negative emotions through sports and politics may be healthy -- up to a point. When anyone who takes the differing view becomes "evil" or "unacceptable" or "unworthy" we have crossed the line.

Friends and relatives should be able to engage in friendly, intelligent discourse about political candidates. After all, if we can't, who can? We should be able to have them about sports teams as well (although I'm not sure how much there is to say on that topic -- to wit: ESPN). If we can't, then we've really lost perspective and have inappropriately displaced our emotions. We need a little reality check, a reminder that we are all created in the Almighty's image.

Songs from Our Youth

Accepting Your Spouse
The Blue Beyond
Great Place to Live
Is Eating Supposed To Be Spiritual?
Comments
MOST POPULAR IN Family
Our privacy policy