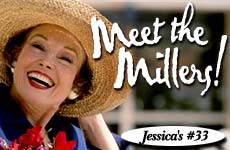 Jessica is a guest of in-laws in potential. Though she suspects she'll always feel like a guest.

"Now that wasn't so bad, was it?" Rick asked me encouragingly as we pulled away from a chain Italian restaurant in Glendale.

I'd just met Rick's parents, his mother's sister and husband, and one of his nephews. This was rather a momentous moment, but it hadn't been nearly as bad as I'd thought it might be.

"I think they liked you," he said, smiling.

I had felt surprisingly not-in-the-spotlight. We'd joined them a little late, which meant I got to make a full-on entrance, complete with an approach to the table that afforded a full head-to-toe sweep for his mom and Aunt Becky.

I had found their casual manner somewhat off-putting. They were polite and amiable, but there was a certain measure of warmth and curiosity missing.

I sat between Rick and his nephew Ethan and listened to Rick's dad and his uncle, Bud, discuss something about a local zoning issue in Glendale. They moved on to planning what, if I understood correctly, was a fishing trip.

They were both engineers and wore golf shirts emblazoned with Motorola's and Boeing's logos, respectively. Ethan had gotten some sort of reading role in the church service and I had no idea what they were talking about. I figured that's how Rick felt (but worse) when Steve made the blessings over the wine and challah at the Shabbat dinner.

There was a certain measure of warmth and curiosity missing.

--That's one thing John and I have in common, I thought. But I said, "Oh really?"

"So Rick tells us that you produce a TV show, but that you really are more of a writer," his mother said, focusing on me for the first time. I had already dutifully recounted my geographical history and curriculum vitae.

"It's a small cable program, so I do most of the writing for it," I explained with a nod. Rick laughed when I added that it sounded a lot more interesting than it was.

She asked me a few more questions and I was surprised at her genuine interest. Through her reserve, I could see that she was an intelligent woman.

"Do you have to work on Sundays a lot?"

I shook my head and flushed. "Only every so often..."

I had been uncomfortable about the idea of meeting Rick's parents for the Sunday ritual of church and brunch. Brunch I was happy to do, but church I wasn't. So I hadn't told Rick that the editing session that had "popped up" was one I'd scheduled, and how I'd bribed three of my staffers to show up with the promise of an elaborate bagel spread.

I wasn't needed for the editing, of course, but it got me the Get-Out-of-Church-Free (without-creating-an-incident-with-your-boyfriend) Card I'd wanted.

After brunch, we headed to his little house in downtown Phoenix so he could watch the Suns game. I found myself gigantically bored as I alternately made sandwiches and flipped through magazines while he watched.

He was engrossed completely and I smiled to myself, thinking of what fine gender role models we were at the moment. Him glued to a basketball game and me with a half-made hoagie in one hand and a woman's magazine in the other...

The mag was open to a not-particularly-fresh article about how male-female communication is like communicating across cultures. Relationships are difficult enough, I heard my mother's voice in my head, without adding a whole new hurdle to leap over.

Deep in thought as I slapped too much mayonnaise on his sandwich, I replayed in my head a conversation I'd had earlier in the week with my father.

You have to be thinking about what you want for the rest of your life.

"Look, you're a grown woman and I am proud to say that you usually make good decisions," he said. "And I think that you know there are consequences to every decision you make, good or bad."

"Was that a threat?" I asked my dad. My parents, not surprisingly, were upset that I was dating Rick.

"He is a great guy, Dad," I said, probably too angrily. "He treats me well and he makes me very happy. I thought that was what you wanted for me."

"Of course we want you to be happy," he said, carefully. "But I am worried that you're looking at the wrong things. I am sure he's a fine fellow, but you have to be thinking about what you want for the rest of your life."

"Getting along, even loving someone, is half the battle of marriage," he said. "The biggest part is looking out the same window."

A few days later, I wasn't sure what exactly he meant and chuckled at his characteristic use of the term "fine fellow."

My mind drifted to this morning's parental unit encounter. His parents were nice to me, to be sure, and were lovely people.

I'd been raised to believe that you marry not just a person, but his family. Marriage produces a tangle of individuals, each tied to the other through love or obligation. At the least, their fates are inextricably woven together through their shared relatives, the next generation marching them into the future.

No family is perfect but if there's tension, it can destroy a marriage. A co-worker of mine in the New York office had blamed her divorce in large part on her inability to deal with her husband's family.

"We just have totally different expectations of what is an appropriate amount of time to spend with our families," I recalled her telling me. "They're always poking into our business and calling constantly."

The biggest part of marriage is looking out the same window.

If I remembered correctly, I thought uncomfortably, she was not Jewish and had married a Jewish guy.

Rick came in and saw the consternation on my face. He asked what was wrong and I told him about the woman -- without mentioning what made me think of her.

"I don't think it's that easy, Jess," he said meditatively. "I think it takes a lot of work."

"But if they loved each other?" I pleaded.

"Love doesn't conquer all," he said. Rick prided himself on his practicality.

The phone rang and Rick moved to answer it in the other room.

I felt distinctly uncomfortable. Marriage is not just about having fun with someone you love, I thought, endless hour spent giggling over videos.

Depressing as it sounds, marriage -- life -- is about paying bills and juggling carpools with work schedules and being with family. Date nights have to be planned and they're infrequent.

I had a sense that I would always feel like a stranger or guest with them.

The Millers had been perfectly nice to me but somehow, I had a sense that I would always feel like a stranger or guest with them. They were not of my world, I felt, although I couldn't place my finger on why.

Could Rick be my world?

Standing in front of his unfinished hoagie, he spoke softly over the mild roar of the televised spectators from the next room.

I looked up, knowing that I liked him, too. And that I had absolutely no clue what that meant to either of us.

Jessica #1 - Quest for the Sparkling Ring

Jessica #66 - Final Episode: Never-ending story
Don’t Believe in Other Gods Versus God is One
Seeing Without Eyes
Why Shouldn’t We Eat Whatever We Want?
Comments
MOST POPULAR IN Dating
Our privacy policy
Aish.com Is Looking for Great Writers