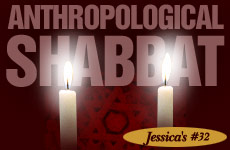 Negotiating the unfamiliar waters of an interfaith relationship, Jessica sees light at the end of the tunnel. But is it the front of an oncoming train?

Rina is a grown-up.

I couldn’t stop thinking that. Sitting at Rina and Steve’s Shabbat table, there was no way Rick had any idea that they disapproved of me dating a non-Jewish guy.

After we’d run into them at the basketball game in the park, Rina called and asked, straight out, why I hadn’t told her I was dating someone. She guessed why.

"Aren’t you going to yell at me or something?" I asked.

I could have deflected guilt, but this was a tactic I hadn’t expected.

"Of course I am not okay with it," she said. "But obviously you’re not either, or you would have told me about him. And I doubt I can really add anything new."

Oh, I could have deflected guilt, but this was a tactic I hadn’t expected. I ended up telling her that Rick wanted to come for Shabbat dinner. After conferring with Steve, she said that we were welcome but that I shouldn’t think that they in any way approved of the relationship.

While Steve cleared the table, Rina spoke graciously toward Rick. Later, I whispered how wowed I was that they were being so great to him, even though they didn’t like him. She rolled her eyes immediately.

"Jessica, I never said anything about not liking HIM! He seems like a really great guy," she said, shaking her head. "My problem is with YOU and the decision you’re making in dating him."

"You’re not being fair to him, or to yourself. My feelings have nothing to do with him. I’m disappointed in and frustrated with you."

There! Now those were emotions I could recognize -- just like my mother’s reaction when I’d told her about Rick.

As tense as I felt during the meal, I was reminded of all the little reasons I liked Rick. Not only had he remembered to bring something for Steve and Rina, but he was the kind of guest Rina called a "giver." He enthusiastically participated in conversations -- as much as he could, since he didn’t have much of a frame of reference for some of the more Jewishy topics -- and gamely offered to help in the kitchen. Best of all, he listened -- actually stopped talking long enough to hear the other people at the table.

Best of all, he listened and made room for other people.

I loved how Rick made room for other people. And I loved how he watched me, as if making sure I was okay and comfortable. Sometimes, when he would catch my eye, it seemed his way of just connecting ever-so-briefly, reminding me that I wasn’t alone. It made me feel very secure.

I could tell that he was enjoying himself.

The next morning, he was fairly bubbling over with enthusiasm as he dropped bagels on my kitchen table.

"It really makes such sense when you think about it," he enthused. "They really do that every week?"

"So they have built into their schedule quality time with their kids, with each other," he said in a tone that could only be called "marveling." "It is just such a good idea. No phone, no e-mail. I wonder if they ever get bored."

"Even if they do," he continued, "it’s just so functional."

For some reason, his comments irritated me. I wasn’t sure if it was because I disliked his anthropological view of Jewish tradition. I thought of discomfort I always felt when I and my other anglo pals would become enamored with one culture or another... we wore South American clothing, ate east Asian food and appreciated African music. We viewed their heritage as something funky to try on and sample, like perfume or cocktail weenies at Price Club.

I didn’t think he was being anything but honest about his admiration, yet I still felt uncomfortable. Shouldn’t I be happy that he liked my friends and that he liked Shabbat? The whole issue here was that I want a Jewish home -- and here, Rick was being enthusiastic about a major part of it -- and I’m getting annoyed. What gives, Jess?!

I returned to the bagel toasting operation I’d begun, half-listening to him enthusing. I tuned back in when he said my name.

"Jess, my parents would really like to meet you," he said casually. And that’s when he said it: "I thought maybe we could go with my family to church."

I looked to see if he was kidding. To church?

"My parents go every Sunday and then take whoever else goes out for brunch," he continued.

I looked to see if he was kidding. To church?

That’s when my cork blew.

He stared another moment and then sidestepped my tantrum. "Jessica, I am not asking you to sign a life membership to my parent’s church. I thought we might simply meet them there. It’s a social thing."

I didn’t say anything.

"And do I need to remind you that I am NOT Jewish? And I still went to your friend’s Shabbat?" he said. He pronounced it shah-BAHT. "And I listened to them praying in a language I don’t know and I didn’t complain! What is the big deal?"

I couldn’t help but stifle a giggle -- the TRUE nightmare "Meet the Parents." Forget Mafiosos. I envisioned me in a yellow, lacy dress complete with Easter bonnet, meeting his parents under a huge crucifix in the lobby of a cavernous cathedral.

"Jessica!" His mother would say, coming toward me, a huge bowl of ambrosia salad in her arms. "It’s so lovely to meet y’all! Ricky’s told us so much about you, what a lovely Jewess you are!"

She would then tell me that she loves Barbra Streisand.

"Why are you smirking?" Rick demanded.

She would then tell me that she loves Barbra Streisand.

I burst out laughing from the ludicrous image in my head. How could I explain to him the absurd stereotypes? A quiet voice in my head reminded me that he, like everyone, carries them too.

"I’m just laughing because my reaction was so ridiculous," I said, apologizing.

I was uncomfortable with my discomfort. It is only fair for me to go with him. It’s a family function. They’re not proselytizing. It’s not like he expects me to go take communion or something.

Then it dawned on me that some of our kids’ family functions would take place in a church.

Why does this have to be such a pain? Why can’t I just go with the flow?! We didn’t even make plans much beyond two weeks away and I am thinking about dealing with our kids??

"Look, Jessica," he said calmly. "We know this isn’t easy, okay? My parents go to church. I don’t. But it’s still what I was raised with, just like Shabbat is familiar to you. You have to be realistic about this. I’ve never tried to figure out how to make them both exist in a relationship and neither have you."

I tried not to be irritated by the way he pronounced Shabbat.

So why, I thought silently, do I think that it’s possible for him to sit at Rina’s table comfortably but I can’t sit in a church and be true to myself?

"Because you think it would be okay if he would just pretend to be Jewish," a small, honest voice whispered in my head.

Smiling penitently at Rick, I wondered -- why is that? Why do we think it’s perfectly acceptable to expect that a non-Jewish beau or beau-ette will convert, but find it horrible when a Jew converts or otherwise accepts the faith of their non-Jewish spouse?

But, still, I thought: Wouldn’t it be perfect if he converted?

Jessica #3 - Fumble Into the Future?

Jessica #36 - Ring Around the Rabbi

Jessica #58 - The Waiting Game
Near Death Experience Panel
The Western Wall: The Heart of the World
Ask the Right Question: Tisha B’Av
Comments
MOST POPULAR IN Dating
Our privacy policy
Aish.com Is Looking for Great Writers