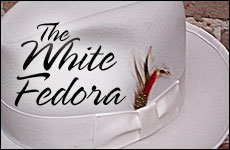 Our seemingly insignificant actions are part of a cosmic symphony.

My backpack and I were somewhere in Germany when it occurred to me that I could surprise my parents, whose first trip to Europe coincided with mine. That was about all our respective adventures had in common. I was living on a shoestring, sleeping in hostels and pensions, riding second-class with no itinerary. I only knew where they would be because they had given me the schedule of their jaunt across Europe on the Orient Express.

If I hopped a train into Austria that day, I could catch them the next afternoon as their train pulled into Vienna.

The morning after I arrived in Vienna, as I hurried to the station, a casual glance into a storefront window made me stop and stare.

It was a hat shop, and amidst all the headwear resting innocuously in the display case was a cream-colored fedora, so stylish and striking that it cried out to be owned. Combining the adventure and bravado of Indiana Jones with the cool self-confidence of Sam Spade, I had to have it.

Or maybe not. The hat cost 20 schillings, equal to 20 dollars -- living expenses for two days. It was an unjustifiable luxury, and I was in a rush. I let it go.

The few hours with my parents were delightful. They hadn't seen me in half a year. I hugged my mother and then my father who, reaching out for a last handshake, stuffed a crumpled bill into my hand. It was a 20-schilling note -- exactly the price of the white fedora.

I left Vienna with my new hat resting jauntily upon my head. I would like to tell you that several people stopped me in the street each day to tell me how dashing I looked. The true story, however, is less dramatic -- but far more intriguing.

I began to wonder how many times the same person might cross my path without either of us ever recognizing the other.

A few weeks after I bought the hat, I began hearing the same type of comment with startling regularity. I saw you in Spain, said an Australian in Florence. I saw you in Rome, said a Brit in Athens. I saw you on the ferry from Brindisi, said a fellow American in Plakias. My hat, it seemed, was one of the popular sights of Europe.

If not for my hat, none of these people would have noticed me. And I began to wonder how many times the same person might cross my path without either of us ever recognizing the other. And how might our crossings affect one another in subtle but significant ways -- without our ever noticing.

THE SYMPHONY OF CREATION

In composing his Psalms, King David introduces many of his elegies to the Almighty with the word LaMenatzeyach -- For the Conductor. The world is like a symphony, and all its inhabitants are like musicians, contributing their melodies and harmonies to the magnum opus of Creation. Every interplay is carefully orchestrated by the Master Musician, whose silent baton guides each of us in the course whereby, through our own choices, we contribute to the divine music of human history.

Whether or not we recognize how our individual contributions complete the symphony has no bearing on the value of those contributions. The Conductor knows, and the perfect harmony of Creation is the proof of His wisdom. And like the proverbial butterfly effect, whereby the beating wings of a tiny insect produce a hurricane on the other side of the world, a single, seemingly insignificant action may bring about a result of cosmic importance.

Most of the time we don't see the initial cause and eventual effect of any given action. But imagine if we did.

Imagine this: A car cuts in front of you in traffic, then slows to a crawl so that you miss the green light at the next signal. You gnash your teeth in frustration, clenching the wheel.

What you don't know is that a block further on, the driver of a moving van miscalculated the timing of the yellow light and barreled through the red. Had you not been stopped at a red light, you would have been in the middle of the intersection -- and right in his path.

Our every action, whether large or small, may indeed have world-altering consequences.

Or imagine this: Your plane arrives two hours late, so that you miss your connection, miss your business meeting, and have to spend six hours in the airport waiting for another flight. Your cell phone won't get reception, your laptop battery is dead, and you left the novel you're reading in the seat pocket because you were in such a hurry to get off the plane, so that you have to spend an extortionate amount of money to buy another book at the airport newsstand.

What you don't know is that the teenage girl on the other side of the newsstand had decided to run away from home after a fight with her parents. The reason she keeps staring at you is because you bear an uncanny resemblance to her father. By the time you get up to go, she has reconsidered running away and decided to return home to reconcile with her parents.

Far-fetched? Perhaps, although each of these scenarios is a variation on a true story. Our every action, whether large or small, may indeed have world-altering consequences. What those consequences will be we may not know until the tapestry of all Creation is laid out before us in the World to Come. What we discover then will be a story more breathtaking than the wildest flights of our imagination.

My Enemy, My Friend

Coming Home From Ramallah
Korach 5782: Visit to Lift the Spirit
That Time The Ivy League Found A Way To Limit Jewish Enrollment
Would You Rather Be Right or Happy?
Comments
MOST POPULAR IN Spirituality
Our privacy policy