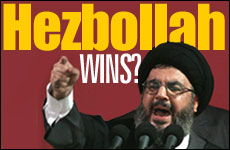 Israel is still paying for its defeat.

It was two years ago this month that Israel and Hezbollah went to war.

On July 12, 2006, Hezbollah, an Iranian-sponsored and Syrian-backed political and terrorist organization, staged an unprovoked raid across the Lebanon-Israel border, killing three Israelis and kidnapping two others, Eldad Regev and Ehud Goldwasser. The war that ensued -- a war for which Hezbollah had openly prepared for six years, constructing fortified bunkers and amassing thousands of Katyusha artillery rockets along the border -- was a disaster for Israel. The fighting lasted for 33 bloody days, during which Israel achieved none of its key objectives: It didn't destroy Hezbollah, it didn't stop the barrage of rockets slamming into its northern cities, and it didn't rescue its kidnapped soldiers.

Never before had Israel's deterrent capability and its reputation for military indomitability suffered such a blow. For the first time in its history, Israel had faced an Arab army in battle and failed to defeat it. When the hostilities ended with the adoption of UN Security Council Resolution 1701, Hezbollah was still on its feet, bloodied but decidedly unbowed.

Two years on, Israel is still paying for its defeat.

In a humiliating capitulation last week, the government of Prime Minister Ehud Olmert agreed to free five Hezbollah and Palestinian terrorists, plus a still-undetermined number of other security prisoners, in exchange for the corpses of Regev and Goldwasser. Among those to be turned loose is the notorious Palestinian murderer Samir Kuntar, who in 1979 savagely killed 4-year-old Einat Haran by smashing her skull against a rock with his rifle butt, having first shot her father in the back and then drowned him in the sea. Kuntar, who also killed two policemen and was responsible for the death of Einat's 2-year-old sister, is today being hailed as a hero by Israel's enemies. The
Palestinian Authority calls him a "brave warrior,"
and Beirut is festooned with his picture.

Israel has almost certainly guaranteed the abduction of more of its citizens or soldiers in the future, and ensured the murder of other innocents in days to come.

This is not the first time Israel has negotiated with terrorists for the release of Israeli hostages (or their remains), nor the first time it has agreed to free brutal murderers. In so doing, it has almost certainly guaranteed the abduction of more of its citizens or soldiers in the future, and ensured the murder of other innocents in days to come.

With every such deal, Jerusalem erodes what little remains of its once-legendary reputation for avenging the deaths of Israelis killed by terrorists. The Israel that in 1976 flew a team of commandos 2,000 miles to rescue Jewish hostages being held in Uganda's Entebbe airport inspired respect and fear in its enemies. Israel today inspires their scorn. Hezbollah's leader, Hassan Nasrallah, has said that despite Israel's nuclear power and military prowess, it "is weaker than a spider's web." Last week's agreement to swap live terrorists for dead soldiers can only have reinforced that opinion.

For months after Hezbollah's war with Israel ended, there were those who minimized the significance of its victory. Thomas Friedman argued in The New York Times, for example, that Hezbollah had "diminished its capability and Syria's and Iran's" and had failed to achieve "a single strategic gain." Under Resolution 1701, a new UN peacekeeping force, known as UNIFIL, was to patrol southern Lebanon and prevent Hezbollah from rearming or threatening Israel -- "a huge strategic loss for Hezbollah," in Friedman's words.

But UNIFIL has prevented nothing and 1701 is more or less a dead letter. Far from preventing the flow of new weapons to Hezbollah, the UN peacekeepers have routinely looked the other way as Iran has massively re-supplied its Lebanese proxy. Hezbollah is now far better armed than it was in July 2006, with an estimated 40,000 rockets deployed north of the border, and the ability to strike 97 percent of Israel's population. Israeli military intelligence reports that some 2,500 Hezbollah terrorists are in southern Lebanon, and have built a series of elaborate underground bunkers equipped with rocket launchers and mortar guns that can be fired by remote control.

Most alarming of all is Hezbollah's effective takeover of Lebanon's government, which it intimidated into submission through violent rampages in Beirut in May. Hezbollah extorted the right to name 11 cabinet ministers, giving it veto power over every government decision. Which means that Hezbollah is no longer a state-sponsored terrorist organization. Now it is something far more dangerous: a terrorist organization with a state of its own.

Who's to Blame for Gaza Civilian Deaths

Palestinian TV: Kill All The Jews

Fatah Isn't the Answer
The Blue Beyond
Great Place to Live
Is Eating Supposed To Be Spiritual?
Comments
MOST POPULAR IN Israel
Our privacy policy