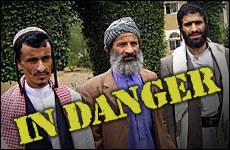 My plea for you to care about the Jews of Yemen.

As a child of two Hungarian Holocaust survivors, I grew up with the Holocaust as real as my parents' existence. It was just part of who my family was, cognizant Jews attempting to rebuild that which was lost. Since my parents had been young during the Holocaust, many of their memories were fragmented, bits and pieces of recollections that took time to surface.

My mother, more than my father, was fierce in her reaction to all she had been through. With clenched teeth she would tell us, "I didn't survive Hitler for no reason. You have to be good Jews." It was a theme in my home. There must be purpose to the generations that followed.

The other mantra I heard from my mother, said in a bewildered tone, was, "I don't understand how American Jews went to hotels on vacation, enjoyed their food, bought clothing, all while my family was being tortured and killed."

My father would occasionally tell us that Hungarian Jewry might have been spared had they done more for the Polish Jews while they were being tortured. My father had grown up in a home that served as a stop on the route of fleeing Polish Jews. My paternal grandfather had risen to the occasion, but he caught a lot of flak from his community who called him a fool for taking the "risks" of getting involved with Polish Jewry's fate.

Many years ago, I picked up a novel, written by another Hungarian Holocaust survivor. She had written of the years she spent trying to save Polish Jews, even as her parents protested her involvement with the rescue work. Most telling was her description of what happened during her engagement. Her mother was busy with her trousseau, and this amazing young lady asked her mother to forgo the luxuries and use the money to buy food to throw over to Polish Jews who were interred in camps. Her parents' response -- "Your life comes first!" -- overruled her intentions.

This writer ends her narrative explaining how the Nazis got to enjoy the expensive furniture, extravagant jewelry and well-stocked trousseau...and how she and her family joined their fate with those of the Polish Jews they failed to save.

After reading that account, each time my mother would muse about where American Jews had been during the Holocaust, I had to button my lip to prevent myself from saying that Hungarian Jews must be accused too.

Is this a guilt trip? Yup, it sure is. I live in the Western world, relatively safe, comfortable, and blessed. However, through one of my responsibilities at a local school as foreign student coordinator, certain world situations come my way as students from various regions come and go through our school system. This past year, two former students were harmed grievously in Yemen. One, a girl, was kidnapped by an Arab suitor and forced into a marriage. Another former student, a Yemenite rabbi was just killed. It barely makes a dent in the news.

The entire Yemenite Jewish community is threatened with kidnappings or murder. So what did you buy your kids for Chanukah? A grenade is hurled into the home of another Yemenite Jewish leader... Have you seen Macy's is having a sale? Amnesty International released a statement, concerned about the very lives of the Yemenite Jews... I found a venue where we can have the Bar Mitzvah.

I raise my voice and shout over the din of our blessed lives, "Hello, Jews! There is a Jewish community whose lives are threatened!"
Conversation ceases for the moment, then comes the discounting of the danger. "Let them just go to Israel" (Um, with what passports?). "It is their own fault for staying in Yemen (They should have just left their kidnapped children there alone?).

The Almighty placed us into this luxurious, peaceful existence that we find ourselves in. It means He expects more from us.

At this shaky time in history, the least we can do is care.

In England, you can email the Ambassador at: yemen.embassy@btconnect.com

Save the Jews of Yemen. Care.

FAST FACTS ABOUT THE SITUATION:

Yemenite Jews have limited rights in Yemen. They are not allowed to bear arms, while everyone else carries daggers and guns. "Abandoned" women, those who have no husband, are under the care of the government and are not given passports. Many of the families still there have relatives who have been kidnapped by Yemen Moslem families.

Two weeks ago, a Yemenite rabbi, Masha Yaish bin Yahya, was murdered in broad daylight in a marketplace in Raidah. The President of Yemen agrees that the Jews in Raidah are no longer safe there. He proposes moving them into Sana'a, the capital city, to be under his protection. However, he promises them a plot of land and tells them to build houses on this tract of land, but gives them nowhere as an immediate safe haven.

Two sisters of the Yemenite murder victim who had years ago moved to Bnei Brak, flew in from Israel upon hearing of their brother's murder. A car drove head-on into the vehicle carrying them from the airport. The two sisters were hospitalized. (http://jewishrefugees.blogspot.com/2008/12/yemen-murder-victims-brother-protect-us.html ) At this point, they would like to return home but want to take their elderly, blind father and the widow and orphans of the murdered rabbi. Thus far, their request is denied.

TALKING POINTS TO HELP YOU GET INVOLVED:

What the Yemenite government ought to be doing:

• Facilitate immediately the safe return of the two sisters to their homes with their requests fully granted and the safe relocation of the entire family with them. The widow and orphans of Rabbi Masha must be allowed to move with the sisters.

• Give an immediate safe haven for the Jews from Raidah, not some far-off long-term resettlement plan.

• Grant each and every Jew currently in Yemen a valid passport, no questions asked about what they will be doing with such passport. This must include each man, woman and child. If they would like to leave Yemen, that should be their right.

Dear Young American Jews against Israel
What Makes Eli Run?
The Tyranny of Materialism
Science Enters the Mysterious Inner World of Consciousness
Comments
MOST POPULAR IN Israel
Our privacy policy

What Makes Eli Run?
The Tyranny of Materialism
Science Enters the Mysterious Inner World of Consciousness
BBQ Bourbon Cheese Kugel Recipe
Korach 5782: Visit to Lift the Spirit
That Time The Ivy League Found A Way To Limit Jewish Enrollment
Would You Rather Be Right or Happy?
Korach’s Unique Punishment
Who Was Josephus? The Controversial Backstory of the Famed Historian
Should I Break Up, Get Engaged or Keep Dating?
1 2 3 … 2,901 Next »