The Enemy Has a Name 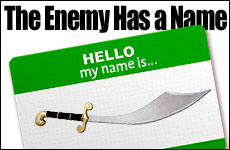 Terrorism is just a tactic, not an enemy.

If you cannot name your enemy, how can you defeat it? Just as a physician must identify a disease before curing a patient, so a strategist must identify the foe before winning a war. Yet Westerners have proven reluctant to identify the opponent in the conflict the U.S. government variously (and euphemistically) calls the "global war on terror," the "long war," the "global struggle against violent extremism," or even the "global struggle for security and progress."

This timidity translates into an inability to define war goals. Two high-level U.S. statements from late 2001 typify the vague and ineffective declarations issued by Western governments. Secretary of Defense Donald Rumsfeld defined victory as establishing "an environment where we can in fact fulfill and live [our] freedoms." In contrast, George W. Bush announced a narrower goal, "the defeat of the global terror network" – whatever that undefined network might be.

"Defeating terrorism" has, indeed, remained the basic war goal. By implication, terrorists are the enemy and counterterrorism is the main response.

But observers have increasingly concluded that terrorism is just a tactic, not an enemy. Bush effectively admitted this much in mid-2004, acknowledging that "We actually misnamed the war on terror." Instead, he called the war a "struggle against ideological extremists who do not believe in free societies and who happen to use terror as a weapon to try to shake the conscience of the free world."

A year later, in the aftermath of the 7/7 London transport bombings, British prime minister Tony Blair advanced the discussion by speaking of the enemy as "a religious ideology, a strain within the world-wide religion of Islam." Soon after, Bush himself used the terms "Islamic radicalism," "militant Jihadism," and "Islamo-fascism." But these words prompted much criticism and he backtracked.

By mid-2007, Bush had reverted to speaking about "the great struggle against extremism that is now playing out across the broader Middle East." That is where things now stand, with U.S. government agencies being advised to refer to the enemy with such nebulous terms as "death cult," "cult-like," "sectarian cult," and "violent cultists."

In fact, that enemy has a precise and concise name: Islamism, a radical utopian version of Islam. Islamists, adherents of this well funded, widespread, totalitarian ideology, are attempting to create a global Islamic order that fully applies the Islamic law (Shari'a).

The needed response is two-fold: vanquish Islamism and help Muslims develop an alternative form of Islam.

Thus defined, the needed response becomes clear. It is two-fold: vanquish Islamism and help Muslims develop an alternative form of Islam. Not coincidentally, this approach roughly parallels what the allied powers accomplished vis-à-vis the two prior radical utopian movements, fascism and communism.

First comes the burden of defeating an ideological enemy. As in 1945 and 1991, the goal must be to marginalize and weaken a coherent and aggressive ideological movement, so that it no longer attracts followers nor poses a world-shaking threat. World War II, won through blood, steel, and atomic bombs, offers one model for victory, the Cold War, with its deterrence, complexity, and nearly-peaceful collapse, offers quite another.

Victory against Islamism, presumably, will draw on both these legacies and mix them into a novel brew of conventional war, counterterrorism, counterpropaganda, and many other strategies. At one end, the war effort led to the overthrow of the Taliban government in Afghanistan; at the other, it requires repelling the lawful Islamists who work legitimately within the educational, religious, media, legal, and political arenas.

The second goal involves helping Muslims who oppose Islamist goals and wish to offer an alternative to Islamism's depravities by reconciling Islam with the best of modern ways. But such Muslims are weak, being but fractured individuals who have only just begun the hard work of researching, communicating, organizing, funding, and mobilizing.

To do all this more quickly and effectively, these moderates need non-Muslim encouragement and sponsorship. However unimpressive they may be at present, moderates, with Western support, alone hold the potential to modernize Islam, and thereby to terminate the threat of Islamism.

In the final analysis, Islamism presents two main challenges to Westerners: To speak frankly and to aim for victory. Neither comes naturally to the modern person, who tends to prefer political correctness and conflict resolution, or even appeasement. But once these hurdles are overcome, the Islamist enemy's objective weakness in terms of arsenal, economy, and resources means it can readily be defeated.

Why the BDS Campaign against Israel is Dangerously Wrong

Inside a Terrorist's Mind

The Miracle, at 60
Lokshen Noodle Kugel Recipe
G-d Time
Shavuot is The Holiday of Cheesecake and Blintzes
Comments