A Blizzard in Shilo 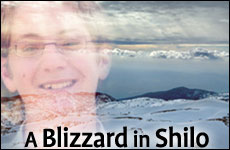 In Israel the winter of 1992 was famous for its blizzard. Shilo, the Shomron village which is my home, was snowed in for three days. For two of those three days the electricity, the water pump and phone lines were all not working. At one point I went to my neighbor across the street and she told me, "I think Avital is in labor." I could not understand how she could know such a thing. No one could have called her. The two block walk to Avital's house was almost impossible to trek due to the snow drifts. Her answer floored me. "I heard it on the transistor radio," she said.

Although Avital was not mentioned by name, the national news had indeed reported that a woman in Shilo needed to be evacuated in order to give birth. It had not been easy to evacuate her. The first idea was to send in a helicopter but it was not able to land because of all the snow. The second try was to send in an army half track truck. It's mission was successful. It took Avital all the way to Tapuach Junction where there was no snow. There Avital was transferred into a waiting ambulance and arrived safely at the Tel Aviv hospital. She gave birth to a healthy baby boy. A week later when Yonaton Yitzhak had his brit milah there was still some snow on the ground. The story of his birth became one of our favorite Shilo legends.

As in most communities Shilo has its share of beloved stories. Many of them come from watching most of our children grow up, mature into responsible adults, marry, and have families of their own. Lives become very intertwined when living in a small community and we share sorrows and tragedies, as well as joys and happiness.

In the fall of 2006 my middle daughter gave birth to her first baby, a boy with VACTOR syndrome. He spent the first ten weeks of his life in the hospital. By the time he was released he had already passed three surgeries. Before he could have his major operation, the one to reconnect his internal system so he would be able to evacuate his waste normally, he would need to grow bigger. Finally, the surgery was scheduled for August.

They were told that the chances of the surgery being successful were very low.

Many of the women of Shilo had been praying for little Elkana daily. Now they organized themselves to recite the full book of psalms for him. My husband and I arranged to spend the whole day at the hospital to be supportive of our daughter and son-in-law. Two days before the surgery they took Elkana to the hospital for all the pre-op preparations. At that time they were told that the chances of the surgery being successful were very low.

They left the hospital knowing they had a heavy decision to make, but the decision was made for them. The following afternoon Elkana developed fever. There would be no surgery for him at that time. His parents used the respite to approach Rabbi Firer, an expert in medical references. Right after Yom Kippur he told them they should go to Dr. Penia at the Cincinnati Children's Hospital. Dr. Penia had pioneered the surgery that Elkana now needed.

There was a lot to organize. They would need appointments, visas, and funds. It seemed very overwhelming. However I was given a sign that it would all work out. During Sukkot I was in the Shilo grocery store. Avital, mother of Yonaton, stopped me to ask what was doing with the baby and his surgery. I explained to her the situation and immediately she told me she had a donation for me. A relative had given her five hundred shekels to give to tzedaka and she could think of no better cause than Elkana's surgery.

That was the first contribution and others followed; some from Israel, others from America and Canada. Some were from family; others from strangers. The funds grew, the visas were obtained, and finally the date for the operation was set for the middle of February.

We were able to make contact with the Jewish community in Cincinnati and learned that my daughter and her husband would be well taken care of. They would be given a furnished apartment for as long as they needed. Meals and Shabbat hospitality would be arranged. Upon arriving in Cincinnati my daughter felt that all she had to do was ask for something and the community would provide it.

Four days before the operation my husband and I flew into Cincinnati to give my daughter and son-in-law the support that we had thought we would have been giving seven months earlier. The community was as warm to us as they had been to our children. Still, even though I had part of my family with me, I could not help being homesick for my home in the Land of Israel.

Shabbat morning tears of longing dripped down my cheeks as the Kedusha was recited:

…When will You reign in Zion? Soon in our days- forever and ever -- may you dwell there, May You be made great and holy inside Your city, Jerusalem, from generation to generation for all eternity...

Elkana's surgery had been successful and my husband and I returned to Israel, to Shilo, to our home, and to our other children and grandchildren. Oh, it was good to be home.

Two nights later news spread of a terror attack at the Mercaz HaRav Yeshiva in Jerusalem.

And then, two nights later news spread of a terror attack at the Mercaz HaRav Yeshiva in Jerusalem. Reports were unclear. Some said six had been murdered; others said more. Some claimed there was one assailant; others said they were searching for more murderers. What was clear was that we would not know whose lives had been snuffed out until the morning.

I woke up early the next morning and made my way to the computer. There among the Shilo emails was the announcement I did not want to see. Yonaton Eldar, Avital's son who had been born in that blizzard 16 years earlier, had been murdered in cold blood along with seven others. He would be buried in Shilo. I laid my head down on my desk and cried.

I believe most of the country cried on that Black Friday. How could we not when such flowers of our youth were being laid to rest? Yonaton was buried in the Shilo cemetery exactly 16 years to the day after his brit milah. To our sorrow he is not the only one there whose live was snuffed out at a young age by Arab terror. We pray that his murder will be the last.

As we made our way to lay a stone on his grave we passed the graves of Avihu, who had fallen in action in Gaza, of Noam whose last act had been to lock the door and save most of the others when his yeshiva was infiltrated by murdering terrorists, of Shmuel, Yonaton's next door neighbor, who had been blown up by a suicide bomber in Jerusalem, of Avi, who had been shot to death on the basketball court of his yeshiva high school, and of Baby Yehuda whose skull had been crushed by a rock throwing Arab.

There seemed to be no end to the tears we shed that day. As I made my way home from the funeral, up the winding dirt path that leads to my home, though, I heard singing. The singing came from a group of voices in the cemetery. It was not the singing of a choir or of trained singers. Some of the voices were off key but the words were all clear. Standing in the Shilo cemetery were a group of boys singing from their hearts to the Almighty.

…When will You reign in Zion? Soon in our days- forever and ever -- may You dwell there, May You be made great and holy inside Your city, Jerusalem, from generation to generation for all eternity...

Although I am back home in Israel I still cry every Shabbat morning when I hear Kedusha. I cry with longing for an end to all the terror and for the time when we will witness God's Kingship. As I cry, I know I am not alone in my longing. Many are doing all they can to hasten the time when God will be One and his name will be One. Some, like Yonaton, devote themselves to learning. Others, like his mother, are committed to tzedaka. There are the communities like Cincinnati and the women of Shilo who concentrate on chesed. And there are those who have a strong love for the land of Israel. We must all work together to bring the coming of the Moshiach, As we work we must not forget to talk to the Almighty, to ask, to beg, to plead. We must not forget to pray.

…When will You reign in Zion? Soon in our days- forever and ever -- may You dwell there, May You be made great and holy inside Your city, Jerusalem, from generation to generation for all eternity... 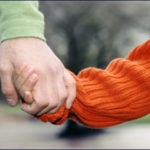 Walking with My Father6 min read

Torn from the Heart6 min read

When The Dow Goes Down6 min read