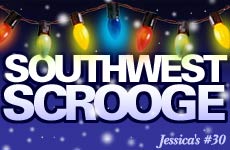 Scrooge Shaeffer lashes out at white lights, holly and being wished Merry Holiday-You-Don't-Celebrate. But why's she getting so defensive?

I still am absent-mindedly skipping over a radio station I'd started avoiding during its annual month of All-Christmas-Carol, All-the-Time programming. Yes, Festivus is over, but it's still in evidence everywhere I look. Houses are garlanded with the strange lights peculiar to the snowless Southwest -- long strings of white bulbs, designed to make the red-tile roofed stucco homes look as if they were coated with snow and dripping with icicles. The effect was quite lovely at night, but strange during the day, when the houses all looked as if hundreds of extension cords were dangling from their eaves.

Oh, the truism. No time of year is more effective for reinforcing Jewish identity. My first true experience with yuletide zeitgeist came my sophomore year in college. I returned to the lovely Victorian house I lived in (owned by the college for student housing) to find that Celeste, our charming French-Canadian cleaning lady, had decorated the entry way with paper cutouts of snowmen, trees and, yes, Santas. Standing on the steps, shivering in the cold of December in Brunswick, Maine, I thought clearly: "I am a minority."

One of my housemates ended up mentioning to Celeste that I was Jewish. The next day, a paper cutout of a menorah appeared alongside the other shapes. I thought it was incredibly nice of her, and of course I didn't point out that a Chanukah menorah has nine branches, not seven. I appreciated her thought, but somehow, it made me feel even more isolated, like a human footnote of sorts.

At some vaguely conscious level, I viewed that "winter break" as a respite not just from school, but a chance to return to more familiar turf, where no one pronounced "Chanukah" with the same beginning consonant as "church." I viewed New Year's Eve as the necessary kick in the pants the country needs to take down all the fake holly strung over every store entrance.

The paper menorah made me feel like a human footnote.

This past month had been somewhat of a return to those feelings -- the fake smile I mustered each time a store clerk wished me a merry holiday-I-don't-celebrate. Or the sense of triumph I felt on behalf of My People when my office received a "Happy Holidays" or "Seasons' Greetings" card with non-partisan snowmen or snowflakes. I felt a bit like an activist member of the alphabet soup of organizations dedicated to fighting anti-Semitism and intolerance in the world.

"Jessica, don't you think you might be over-reacting a bit?" Rina said, laughing at my semi-serious tirade against the subversive proselytizing represented by office Christmas cards. I'd harped about it as soon as we sat down to Shabbat dinner last week.

I'd seen Rina and Steve less since I started dating Rick. That was partly due to the inevitable shifting of time allotments that happens when you start dating someone, but -- in moments of honesty -- I knew I was avoiding them. I was sure they'd have concerns about of me dating someone who wasn't Jewish. (Even if he was sweet and kind and treated me wonderfully well.)

It sounded very Walton Family Robinson to me.

I was on my own over the long Christmas weekend. Rick had gone up north for his family's traditional extended holiday. According to him, the whole mess of Millers converged on a cabin in Payson and spent five days drinking eggnog and retrieving freshly unwrapped presents left out in the snow by the younger generation of Millers. It had sounded very Walton Family Robinson to me.

So I'd called and invited myself for Friday night dinner at Rina and Steve's. I felt guilty about avoiding them – especially since I so much enjoyed being with them.

In no uncertain terms, Rina told me that she thought I was nuts about my Christmas antipathy.

"It's remarkable how so many offices go out of their way to acknowledge that not everyone celebrates Christmas," she said. "In most people's world view, it's a holiday about being with family and stimulating the economy as much as it is a holy day. That so many people are sensitive to the tiny Jewish population amazes me."

She described a commercial the local Fox station had been running, showing the local news anchors frolicking in Santa hats and wrapping each other in tinsel. For a split second, one is lighting a candle with a Star of David emblazoned on the front.

"Jessica, why are you looking at it that way? Yes, it's a token," she rejoined, "but what would you have them do? Ignore a holiday that 95 percent of the country celebrates? You're acting as if the marking of a Christian holiday somehow impinges on your ability to not celebrate it."

Why should they ignore a holiday that 95 percent of the country celebrates?

Rina chuckled. "If you want the full Jewish experience -- you could always go to Israel!"

Rina continued. "To be honest, the thing that bothers me is how we insist that they stick a menorah out there alongside the trees. Our kids learn that Chanukah is the equivalent of Christmas or something," she said, shaking her head. "The greatest irony of all is that the Maccabees were fighting against the wave of assimilation that the Greeks had brought to the Jewish world. And now, Chanukah has become the very symbol of Jewish "mainstreaming" into greater Western society."

Rina continued. "For thousands of years, Jews have gone beyond the call of duty -- even risking their lives in the Holocaust -- to light Chanukah candles. Surely the holiday means more than the Jewish response to December commercialism."

The greatest irony of all is that the Maccabees were fighting against the wave of assimilation.

At that very moment, five-year-old Ari piped up and began explaining what he learned about the Maccabees at school, and how Chanukah is about people who fought to stay Jewish.

I rolled my eyes, wondering if the long-departed soul of my great-grandmother had somehow planted Ari's talk as a guilt trip. Here I was feeling self-conscious of my relationship with Rick, and now I was getting a sincere lesson in Jewish identity from a kid barely 4-feet tall.

"Jessica," he seemed to be saying, "if Judah Maccabee could risk his life for the Jewish people, you could certainly break up with your non-Jewish boyfriend."

My dual identity took an about-face the next evening, when I spent an hour on the phone with Rick who called from the cabin. I smiled, listening to him describing the wacky preparations Christmas Eve had entailed, having a Bridget Jones moment noting to self how delighted I was to have a date for New Year's Eve.

If Judah Maccabee could risk his life for the Jewish people, you could break up with your non-Jewish boyfriend.

I told him about my dinner at Rina and Steve's and, to my surprise, he was intrigued. To my further surprise, he asked if we could go together sometime. I muttered "sure" -- and then realized that if I were to follow through, it might be time for the two of us to come out of the dating closet.

And then something Rina said flashed through my head: If I was more secure in my Jewish self, then other people's obsession with holly, trees or even nativity scenes wouldn't bother me at all. My mind wandered as Rick continued chatting on the phone...

Jessica #4 - Carole and the Geek

Jessica #58 - The Waiting Game
Don’t Believe in Other Gods Versus God is One
Seeing Without Eyes
Why Shouldn’t We Eat Whatever We Want?
Comments
MOST POPULAR IN Dating
Our privacy policy
Aish.com Is Looking for Great Writers