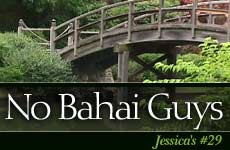 Jessica struggles with not wanting to date other faiths. Is she being

After storming out of the Jewish singles party, I waited outside the bar for what seemed like an eternity before Rick's familiar Accord pulled into view. He hopped out and opened the door for me, pausing when he saw the marquee sign advertising the Greenberg party: "Jewish singles, come one, come all."

I winced and got in.

"Jessica, I am so glad you called me," he said, "but I am a little confused. This is the first time a woman I am dating has called me to pick her up at a singles function."

I sighed, and winced again. Stupid me. At least I should have walked down the street.

"Do you want to tell me what is going on?" he said, confused rather than angry. Certainly I'd have been angry if he'd had the chutzpah to call me from some Christian singles function and have me shlep across town to get him.

"Would you ever go to a Christian singles function?" I asked suddenly.

"Would you ever go to a Christian singles function?" I asked suddenly.

"Well, no," he said, as if the question was a little ridiculous.

"Is that supposed to be an explanation for whatever is going on right now?"

Oh, right. I owed him an explanation.

Ironically, he ended up pulling into Morris the Delicatessen, yummy kosher deli. That could not have been deliberate, I thought.

I had kept up a steady stream of chatter once the car started, trying to avoid explicating what was spinning through my head.

I was relieved when he ordered a respectable turkey on rye sandwich. I don't think I could have handled white bread.

"Jessica, we're sitting down now," he said, reigning in my evasion. "I'm ready for the explanation you keep avoiding."

I took a deep breath. I'm not particularly skilled at expressing my emotions when they're simple. So expressing them when I don't understand them is a Herculean endeavor. But Rick's open manner made me think it was worth the effort.

"Remember when I asked you if you were Jewish and you said no and you asked me if it was an issue?" I asked.

"Well, it is. I mean, I think it is," I said, floundering. "Look, I thought you were Jewish when we first met. Then I started to really like you, and I've never dated someone who wasn't Jewish, and now I am confused."

"So today, I got scared because I like you and I felt like maybe I wasn't doing enough to meet Jewish guys. So I panicked and went to an event just to see..."

"Just to see if you met someone you liked better than me?"

I was taken aback.

I was trying to avoid my desire to bring a nice Jewish guy home to Mom and Dad.

I wanted to tell him that that wasn't a fair thing to say but, of course, it was.

I was trying to avoid dealing with the conflict between my feelings for Rick and my desire to bring a nice Jewish guy home to Mom and Dad.

"It's never been an issue before, I guess. All the serious relationships I had were with guys who happened to be Jewish. I didn't know it was a problem because it never really came up. I want to get married some day and I always thought I would marry a Jewish guy."

He inhaled and I could tell his gears were turning.

"Jessica, I would like to find Ms. Right too. You're not scaring me," he said, apparently reading my thoughts. "But I don't see what the big deal is. Your being Jewish is okay with me."

I felt stung and didn't know why.

"It's not an issue for me," he continued. "I wouldn't stop dating you because you're Jewish. Okay?"

I knew that he meant it as a reassuring remark, but somehow it infuriated me. He would even consider not dating me because I am Jewish? What is he? An anti-Semite?

I realized how comical my accusation was, given the corollary.

Fortunately before I said anything, I realized how comical my accusation was, given the corollary that I could then be accused of being anti-uh -- anti-non-Jew?!

I didn't think so.

"Look, we're not getting married tomorrow," he said, affably. "We're just getting to know each other. Why don't we continue doing that and then we can decide if it's an issue?"

It sounded so reasonable.

I smiled and the conversation moved on.

On the way back to my apartment, we stopped at the railroad amusement park, which was lit up beautifully with some sort of "holiday" event. In the spirit of ecumenism, the place was festooned with holly, garlands and poinsettias -- but no nativity scenes.

I wondered: What would my own commitment look like?

I absent-mindedly wondered if this symbolically described Rick's religious commitment: all the trimmings, but no deity.

And then I wondered: What would my own commitment look like?

Laughing, we rode the train. After the third go-round, he became suddenly straight-faced and told me: "No more singles functions, okay? If you're going to date me, you can't date anyone else, whether he's Jewish or Zoroastrian."

"Nope. No Bahai either. Definitely not."

He promised he'd wear a turban if it was important to me.

I wondered if the same went for a yarmulke.

Jessica #60 - Home For The Holidays
Near Death Experience Panel
The Western Wall: The Heart of the World
Ask the Right Question: Tisha B’Av
Comments
MOST POPULAR IN Dating
Our privacy policy
Aish.com Is Looking for Great Writers