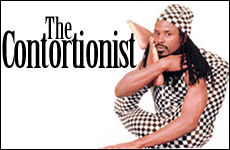 Yogi Laser, the conveyer of light.

He stood in taut, red spandex that dramatically outlined all his muscles. "I am Yogi Laser," he intoned, "teacher of light and a contortionist."

He caught my attention and I halted right there on the wooden dock of South Street Seaport. Street performers are quite common there but never before had I seen a contortionist, and I wondered if I would be able to mimic some of his stunts at weddings.

Theme music began to play. Yogi Laser scrunched his body impossibly small, bobbing his head back and forth between his hunched shoulders as he pulled his mouth into a huge slash from ear to ear. Then he waved his feet in the air as he walked on his palms. That was his impression of the spider.

Louder theme music sounded and Yogi Laser became a board. Don't ask me where his internal organs disappeared to when he did this stunt, but his abdomen went smack against his spine. Yogi put his legs behind his neck, as casually as you and I fold our arms. This was way beyond where I could stretch my limbs and muscles.

It didn't seem possible, but he had managed to take close to six feet of rippling muscles and contort it to fit the parameters of a small box.

Then the finale. Yogi Laser took out a small Lucite box, slowly folded himself up and popped himself into the box. When his last limb (a leg) was finally folded into the box, Yogi shut the box on his squashed self. It didn't seem possible, but he had managed to take close to six feet of rippling muscles and contort it to fit the parameters of a small box.

How did he do it? I wondered. It must have been years of training and practice. Could I ever learn how to be master of my limbs in such radical a manner? Then it hit me. There are even greater master contortionists who train themselves to take their egos, personalities, the whole six feet of their bristling desires and fold it all up when it needs to fit into the shape and diameter of right and wrong. I began thinking of folks I know who've learned how to contort themselves by stretching themselves beyond normal limits. If ever I want to learn how to contort my spiritual self, I must learn from them. Each one can be my "Yogi" for this growth.

For example, a Brooklyn couple I know hosts guests from abroad -- sick patients traveling for medical care, rabbis out to collect funds, the confused teenager looking for a warm home. This couple has mastered the art of spiritual contortion by giving beyond normal limits.

On one occasion, their scheduled guests' flights happened to be staggered, with each guest arriving about one hour after the other. The first guest walked in at dinner time. "Welcome. You arrived at the perfect time," said the hostess, "just in time for dinner." She served the guest and her husband, and they ate. The guest retired to his room, the hostess cleaned the table, and then there was a knock on the door. Guest two was arriving. The hostess quickly reset the table, as her husband opened the door. "Welcome," said the host, "You arrived at the perfect time, just in time for dinner." He sat down with his guest, the wife served dinner, and they ate. An hour later, the scene repeated itself. I arrived with their fourth guest an hour later to the same scenario. Four times, the host and hostess repeated the same scene. Four times, the man ate dinner. Four times, his wife served dinner as if it was her first time serving. I confer upon them the title, "Yogi Patience and Sensitivity".

A heart specialist from Boston arrived in Israel for some downtime. Since his spare time in his hometown is often not his own, the far away location ensured some time away from all things medical. Yet, some nudnik found out where he was and notified him about a seriously ill infant whose parents wanted to consult with doctors in Boston. He didn't hesitate and didn't wait to be asked twice. He picked up the phone and called the infant's family. From him I can learn the art of going beyond my own personal needs to meet the needs of others.

We all have needs. We all think we have limits. How many times do I find myself muttering, "That's it! I've reached my limit"? Yogi Laser, by stretching his rippling muscles that day at South Street Seaport, gave me an insight into my own capabilities in becoming master of my emotional and spiritual limbs, stretching beyond what I thought were my limits.

I am striving to be the ultimate contortionist, conveyer of the light.

From Anger to Acceptance

7 Tips for Rosh Hashanah
What Makes Eli Run?
The Tyranny of Materialism
Science Enters the Mysterious Inner World of Consciousness
Comments
MOST POPULAR IN Spirituality
Our privacy policy