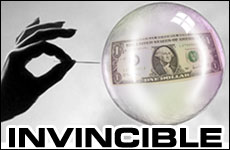 For over 3,000 years, the sukkah symbolized vulnerability, contrasted to the house, which symbolized security. Then came the subprime mortgage disaster, and suddenly "the house" seemed frighteningly vulnerable. With the American financial system and world markets shaking like a sukkah in a hurricane and institutions we thought were as impregnable as fortresses suddenly collapsing like flimsy huts, the sukkah may indeed prove to be the most invincible.

The holiday of Sukkot is about vulnerability and faith. The vulnerability part is clear: We move out of our solid homes into temporary structures, with organic roofs through which one can see the stars. We are exposed to heat, cold, and rain. No matter how large or lavish the sukkah, dwelling in a sukkah drives home our vulnerability to life's vicissitudes.

The sages of the Talmud disagreed about whether the Torah's mitzvah to dwell in a sukkah was supposed to recall the physical huts the Israelites dwelled in during their 40 years' wandering in the desert or the mystical "Clouds of Glory" that surrounded and protected the Israelites in the desert.

The sages understood that the huts were a statement of Israel's love for God, in that they followed Him into a desert with no substantial means of surviving there. The Clouds of Glory, on the other hand, were a statement of God's love for Israel, in that they protected those who dwelled within them from the harsh desert sun, from snakes and scorpions, and from the spying eyes of would-be attackers. Whether regarded as a physical or spiritual entity, the sukkah represents the love relationship between God and the Jewish people.

Similarly, we live within two realms: the physical and the spiritual. Both are real and both demand our attention.

How can joy be the result of vulnerability?

The nature of physical reality is that it is transient, perishable, and vulnerable. Bodies age and are susceptible to illness and injury. Buildings, even mighty skyscrapers, can be destroyed by hurricanes, earthquakes, or terrorists. "Financial security" is an oxymoron, as we witness the most secure investments and dependable firms going bankrupt.

In the face of the worst economic crisis since the Great Depression, many of us feel as vulnerable as sukkah dwellers. People who have lost their jobs, their homes, or the value of their investments may well experience an existential angst. What can they depend on? And what does the future hold?

The anxiety and fear generated by financial vulnerability is the diametric opposite of the emotion produced by the sukkah's vulnerability. Sukkot, more than any other holiday of the Jewish calendar, is the festival of joy. While it is a mitzvah to rejoice on all the festivals, Sukkot alone is designated in the liturgy as "the time of our rejoicing."

How can joy be the result of vulnerability?

When we leave our houses to dwell in the sukkah, we leave behind the illusion of security fostered by our cozy homes.

When we leave our houses to dwell in the sukkah, we leave behind the illusion of security fostered by our cozy homes. After all, our houses may be invulnerable to rain, but they are vulnerable to the bank's foreclosure. All physical security is an illusion. In this sense, Sukkot is a week of reality therapy.

Instead, the sukkah offers the comfort (and joy) of dwelling within the Divine Presence. The mystical Clouds of Glory surround the sukkah, creating a place of Divine immanence. The nature of spiritual reality is that it is eternal, imperishable, and invincible.

Yes, rain may drench the sukkah, but the sukkah's spiritual dimension is as unaffected as a diamond in a downpour. "Sukkah consciousness" is the awareness of the proximity of God. After the spiritual purging of Rosh Hashana and Yom Kippur, Sukkot comes as a reward for the soul, the only reward the spiritual realm offers: a sense of being close to God.

The result is unmitigated joy.

But can spiritual joy offset the dismay and despair of physical and financial loss? Imagine that a fire breaks out in your home in the middle of the night. You awake to a conflagration. Suddenly, the firemen burst into your room and lead you out of the house to safety. In shock, you watch as your entire house and all your possessions go up in flames. But where are your family members -- your parents, spouse, or children? Have they been consumed by the fire, or were they also rescued? In the darkness and chaos, you panic in fear for your loved ones.

Then, suddenly, someone rushes into your arms. You look up to see the people you love most in the world. They are alive and safe. Wouldn't the spiritual joy you feel at that moment offset the dismay and despair of losing all your possessions?

A VISIT WITH RABBI WEINBERG

An intimate and loving relationship with God can offset any physical or financial loss. How do I know this? Because last night I spent five minutes with Rabbi Noah Weinberg.

Rabbi Weinberg, the founder and Dean of Aish HaTorah, was diagnosed with cancer a half year ago. At age 78, he has undergone radiation and chemotherapy, which have made a miraculous difference, but the treatments took a heavy toll on him.

Last night, as Rosh Hashana was just ending, my friend Pamela told me, "I'm going to see Rabbi Weinberg. He spent Rosh Hashana in his office suite at Aish HaTorah here in the Old City. Do you want to come?"

I jumped at the chance. I had met personally with the Rosh Yeshiva only twice before, but I have been praying daily for his recovery.

Several of his grandchildren were playing on the steps to his office suite. The door was open. Pamela asked someone if Rabbi Weinberg was there, and we were invited in.

Rabbi Weinberg was standing there leaning on a cane. I would not have recognized him. His once robust body was hunched over and frail. His distinguished, bushy white beard was thin and straggly. His ageless persona had been replaced by the visage of an old man.

But his beaming smile lit up his whole face, indeed the whole room! He was radiant, vibrant, and joyful.

Pamela quickly introduced us both. "I'm Pamela, and this is Sara Rigler."

"How are you?" I asked, my heart breaking at his physical decline.

"Oh! I just read your article about the woman who saved her children from the fire," Rabbi Weinberg responded, turning the conversation away from himself. "It gave me chizuk [strength]." He laughed out of an effervescent joy that was issuing from nothing visible.

Pamela and I expressed concern for his health.

"Do you know what the most important thing in the world to know is?" he asked, fully engaged with his uninvited visitors, even as he stood leaning shakily on his cane.

We shook our heads.

It was an encounter with perfect faith. Not that God, Who runs the world, had made things happen as Rabbi Weinberg would have liked. But rather that God, Who runs the world, had done whatever He did out of love for Rabbi Weinberg; that somehow, in some inscrutable way, the cancer and its ravages were gifts of love. Because the ultimate, invincible reality is God's love, which Rabbi Weinberg felt so acutely that he wanted to communicate it to Pamela and me. Closeness to the Divine was lighting up his face and animating his broad smile. His body was totally vulnerable and sadly deteriorated, but his faith and joy were invincible.

It was a quintessential sukkah moment.

Do Angels Need to Dance?
Why Are The Prayers Of Yom Kipur So Repetetive?
Ha'azinu 5783: A Time for Unity!
Twisted Thinking
Comments