In the Hands of the Enemy 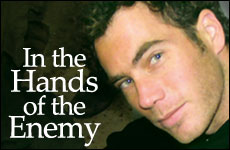 Eldad Regev was kidnapped with his patrol partner, Ehud Goldwasser on July 12, 2006, as they patrolled Israel's border with Lebanon. The subsequent chain of events that followed the kidnapping of Eldad and "Udi" spurred the beginning of the Second Lebanon War.

It's been one year and eight months since Eldad and Udi have been kidnapped, and there has been absolutely zero indication on their condition or their whereabouts. The word "helpless" is an understatement. We ask our readers to act in all ways possible to help bring these young men home safely.

Can you tell us about Eldad? What does he represent to you?
Eldad is supposed to be 27 today; he is my little brother (pauses). At the time that he was kidnapped, he was studying pre-Law, and the official acceptance to the faculty of Law arrived after he was kidnapped. Who is he? I think his most prominent character trait is his firmness. He is very principled, on political issues, personal issues... Whenever he had a stance on something, he stuck to it with all his strength.

Is there something that you remember specifically about Eldad?
I remember him most recently playing with my son. He has such a great connection with kids, especially with his nephews...

How does a religious family deal with such a difficult situation? 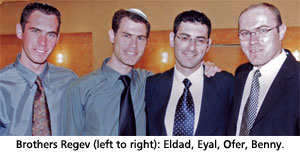 If you're asking about the event, our faith or asking God why it happened, our education has taught us not to ask such questions. This is from shamayim, from Above.

We are trying to change it, we are trying to bring him and the others back. From the perspective of faith, we have the same thoughts and the same actions as always. I can't say that we've changed -- not me, not my brothers, not my father.

It's a lot to deal with; not just the kidnapping in itself, but the long absence. It happens when you lose someone. I, myself, lost my mother nine years ago and I didn't lose my faith. It didn't change in me. Maybe it changed for Eldad.... But as a religious person, I still believe, I still pray. You're supposed to bless the bad and the good. It's not simple to bless the bad, but no one promised a life of goodness only...So we deal...

Whoever is disturbed by this, think of ways that they themselves can help.

How does your community help you?
There is a definitely support. Close friends, community members and in general, people that recognize me in the street, there's definitely encouragement, support, and unity to return our brothers.

Are there specific things that they do to help you go on?
Words of encouragement definitely help and strengthen us. Letters from children, inquiries, phone calls, especially my father gets a lot. There is an obligation to the world, according to the UN, to call for an immediate release. Fine, we know that we won't get an immediate release, but of course we want a release.

So whoever is disturbed by this, think of ways that they themselves can help. If someone is influential in his/her community or in some organization, let them exercise that influence for the cause. That's how we're asking people to help.

Is there a strategy? What is the overall picture right now? Where do things stand?
The State has a strategy. Ministers of the State had said that immediately after the war, they would open negotiations with Hizbollah. They are first trying to first discern if they are still alive, and then they want their return to Israel. But that's been the strategy that they've been carrying on for a year and a half already.

There are negotiations going on, but we haven't made any progress in over a year and half. We don't even know if they are alive! And what have we done? We had a war, although we now know that the liberation of Eldad and Udi was not one of the goals of the war.

They take place once every 1-2 weeks...very slow, over a long period of time. People are talking, but we haven't made any progress.

Are there specific institutions, organizations or any particular public figure that gives you disappointment? Anyone who could do more, but isn't?
First of all, there are the states that signed the declaration in the UN calling for an immediate release. They signed this paper, but no one has fulfilled what they promised. Not releasing Eldad and Udi is a breach of international law. It's against UN conventions, against UN declarations, and no one is saying anything about it. They are not even demanding their immediate release.

The one public figure who is most disappointing is the one who has conducted the negotiations both during and since the war: Ehud Olmert. This is his responsibility; he is the man that must change the current situation. I don't think he's apathetic... he's a father, too. When he sits with my father, I do think he understands our pain.

There are certain moments where you really have doubts. You're in a situation where you just don't see the end.

Are there points of breaking down? Any despair?
There are certain moments where you really have doubts. You're in a situation where you just don't see the end. Nothing is happening and days pass by and there's nothing happening. There's a lot of frustration with the current situation... it's been a year and a half of negotiations and absolutely nothing has progressed. Eldad and Udi still aren't here. It also comes from the fact that the State isn't getting any information about their fate. It's really about frustration; not despair.

With regards to Ron, we did know that he was alive, but we don't know right now. The comparison with Ron Arad is conceivable. We're talking about the same country, the same organization...

The comparison itself doesn't do anything for me, except to say that Ron Arad is still in captivity. What I mean is, the situation with Ron Arad is a warning sign; it's been years and nothing has happened, we still don't know what his condition is. It shows us what will happen if we don't work on releasing them now.

What is your connection with the Shalit and Goldwasser families?
We are very connected. We give each other updates and report to one another.

To what extent do you receive aid or support from the Jewish community in the Diaspora?
The Goldwassers and the Shalits go abroad a lot. There is massive support. Every synagogue I went to on shabbat said a special prayer for the return of the MIA's. I definitely feel that there is a desire to help us and influence other governments to do what they can.

I think the main issue right now is on the Israeli side, and that is a problem of courage. There is not enough courage to act. We are expected to risk our lives for the country when we are in the army, but when something like this happens, the country doesn't risk itself for you?

As I see it, Hizbollah doesn't see any obligation to release them. Absolutely no obligation, and Israel is lacking the courage to act.

If there's a particular message that you have for the Jews in the Diaspora, what would it be?
If it disturbs you that there are soldiers who have been in captivity for a year and eight months, and no one knows whether they need medical attention, or whether they are even alive and their families haven't heard anything and Hizbollah refuses to give any information, then everyone in your particular place, you should do something. Wherever there is action, there is influence.

Hizbollah has aspirations to be a legitimate political body, not just a terror organization. Their way of getting to this is by using Eldad and Udi as a ploy, and not giving any information on them. As long as they are withholding information, it is a breach of international law, and against human rights.

Everyone in their community should exercise their influence however way they can.

What is the first thing Eldad will do when he is released? 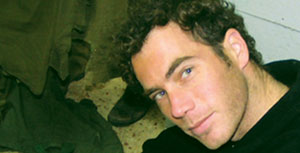 He will come to his family. Family is very important to him. He has to meet his new nephews who have been born... and God willing, there's another child on the way. That's what he'll first do- he'll be with his family.

If someone wanted to volunteer in Israel or abroad, where should they turn?
We work with an organization called Habanim and whoever would like to get involved can find information through the website. Specifically for English speakers, putting pressure on Hizbollah is crucial. The most effective pressure comes from western countries. Through conferences, forums, speeches, rallies, demonstrations... Anything that gets to the media or to politicians definitely helps.

If Eldad can hear you, what would you want him to hear?
We're doing everything we can, with all of our strength, to get you out of there.

My wife and I had a son shortly after the kidnapping. We named him Et'ah (in time) Pedu'el (God will redeem). That is my message: that God should release Eldad and redeem him soon.

This article originally appeared in ShiurTimes.

Why I Love Cleaning for Passover3 min read