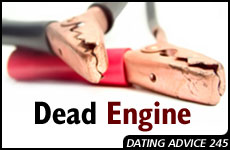 He doesn't call, and doesn't care. Is the courtship over?

I have been in a long-distance relationship for six years. I've been as patient as I can possibly be, and now I feel like he's drifting away from me.

In the first three years, things were good and he was very attentive to me. Back then I asked him what the status of our relationship was and he said to be patient with him. He had been in a very volatile relationship before me and it scarred him. I've always been very understanding.

Over the last three years, things have changed. I am always the one to initiate, and when we are together I feel like he's just humoring me, not genuinely enjoying our time together. He spends all his spare time with his friends and doesn't include me in his activities. Plus he's criticizing little things I do and we have disagreements about stupid stuff.

I need some advice. I'm scared to lose him. But if end things now, so what were the last six years for?

We're sorry that you've had to experience so much pain from this relationship. Relationships deteriorate when they are allowed to stagnate, whatever the reason for that stagnation. That's what we think has happened here.

During the beginning of your time together, the connection between the two of you grew in strength and depth even though you communicated over a distance and did not see each other as often as you would have liked. This man may have hoped that he could become more committed over time, but obviously something blocked him from moving things to the next level.

The time was right for him to do this 5, 4, or even 3 years ago, by being able to trust you more, opening up to you more, and being able to commit to a future together. It is a general rule never to let things go too long without each side clearly expressing his/her long-term goals.

Relationships -- whether they are dating courtships or relationships between spouses -- are not meant to stay at the status quo. When one or both partners hold back from allowing their connection to grow, what they had starts to fall apart. It starts with little things that build over time, and they accumulate enough so that both partners are dissatisfied. Often, the deterioration is exacerbated by the fact that one partner wants to deepen the connection and wants to get married, and the other isn't ready or able or willing to do this.

At this point, there is a bigger question: What was your relationship like at its peak? Did you have compatible goals and values? Did you respect and admire each other, feel a deep level of trust and friendship, accept each other's flaws, and care for each other? Could you have pictured yourselves building a life together, and was this something you both wanted (even though he said he needed more time)? Can each of you answer yes to all of these questions?

If you can, then it may be possible to resurrect what you once had and then build upon that -- as long as each of you genuinely wants to make the effort to do so. We emphasize the words "each of you" because the desire to work on this has to be a mutual one. Both partners have to want the same goal, and have to be willing to invest the time and emotional energy needed to recapture and strengthen what they once had. And they have to acknowledge that they will need an experienced relationship counselor to guide them through the process. If the two of you aren't of the same mindset, there is no chance of success. You can't drag someone to therapy and expect it to amount to anything -- if he is coming along to appease you and not because he genuinely wants to achieve a goal.

And there's another big point: We both have seen how therapy can help couples rebuild and improve their relationships, but this can only happen when the underlying relationship was once a viable and promising one. Therapy won't "fix" something that wasn't working in the first place.

Our hunch is that as you look back at this courtship, you'll see that one or more of the important elements we mentioned were never present. For example, there wasn't enough reciprocation. If you hadn't taken the initiative most of the time, you wouldn't have had nearly as much contact. And we question whether you ever had a deep enough level of mutual trust.

We suggest that you do some soul searching, and perhaps some writing, to sort all this out. If you decide that the two of you did have a promising relationship, you can ask him if he also would like to participate in couple's therapy to revitalize things, and if he also wants to address issues that may keep him from being able to move your courtship to deeper levels. However, if he's not interested, it isn't worth it for you to stick around. And certainly, if you come to the realization that your relationship wasn't strong enough in the first place, you'll need to accept the fact that all of the work in the world isn't going to make it much better.

If and when you move forward, we hope that you don't berate yourself for having invested six years in a courtship that didn't progress. Yes, six years is significant, but it's only recently that you came to realize that things weren't going to change for the better on their own. It will help you move forward with a positive frame of mind if you don't focus on the ways in which you may have been disappointed, and instead acknowledge all of the positive things that came out of this period of your life, such as the fact that you learned not only how to be a good giver, but you now realize how important it is for you to be a receiver, too.

Try writing down your ideas about the ways in which this relationship enriched you. When you feel angry at this man or at yourself, review this list. It will help you maintain a more balanced perspective and a healthy frame of reference as you move forward in life, and especially as you continue to navigate the dating maze.

Dating Advice #143 - Merging Assets
For Every Individual, A Torah Scroll
Allegiance To The Monarch
Meet the Real You: Yom Kippur
Comments
MOST POPULAR IN Dating
Our privacy policy
Aish.com Is Looking for Great Writers