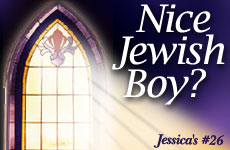 It's no small wonder that I went into TV production and not on-camera journalism. Write my thoughts down, I can always do. Speak them aloud? Hello, nitwit mouth.

I can just imagine me reporting from the scene of some horrible crime.

Anchor: "And now to Jessica Shaeffer, live at the scene of today's heinous but ratings-boosting criminal act!"

Cut to me, spacing out.

I look up, startled.

Anchor: "Uh, Jessica, can you tell us what's going on at the bloody scene, or maybe grab one of the victim's relatives to sob on camera while you ask ridiculous questions like 'How does it feel having found your mother bludgeoned to death?'"

Me, looking sheepish after stammering a few nonsensical words: "Uh, sure, Bob... perhaps I could just e-mail the viewers the details.'

Cut to me, real-life, standing outside Rick's office door, trying to formulate in my head what to say.

I'd been planning this for two weeks, too chicken to openly ask him out. Then he sent me a cute little package expressing interest.

It was very adult of him, and brave too, but my secretary had delayed giving it to me for a few days. So now I was trying to figure out how to best acknowledge his interest, return it, and simultaneously explain that I'd gotten the package late.

I stood there, trying to blend into the wall each time someone walked by.

I stood there for about four minutes, a seeming eternity, trying to blend into the wall each time someone walked by. I nearly had two sentences formed when the door opened -- and naturally it was he, looking at me strangely.

--"Jessica!?" he said, looking surprised but pleased to see me tarrying in the corner. "Uh, what are you doing?"

My brain skipped first gear and lurched into fourth.

"I'm trying to find the words to ask you out and also tell you that I didn't get your package until this morning and I wasn't playing games," I blurted.

"Oh, man," I sighed to myself. "Verbal stream-of-consciousness yet again trumps any facade of cool."

"Before I sound any more idiotic, can I take you for lunch? I still owe you a thank you for changing my tire," I said feebly.

"Sure, Jessica. I'll gladly have lunch with you," he said.

We ended up grabbing sandwiches at a sub place and sitting in a small park nearby that I'd not known existed.

"Downtown Phoenix is much nicer than a lot of people realize," he told me. He lived in one of the revitalized historic neighborhoods, in an old Craftsman bungalow that he'd spent the last few years renovating.

I was surprised that there was any dwelling in the Valley that could be called "old." From my observation, anything older than a quarter-century was knocked down to make way for more white stucco condos or another strip mall with a Ross superstore, Best Buy and a Black-Eyed Pea restaurant, all surrounded by an ocean of parking.

I emailed Alison when I got back to the office: He's really nice and interesting, but nothing major to report yet.

Either he is a caffeine addict, or he was itching to see me, too.

Until that week, I never realized the entertainment value of courting someone who works in the same building. I found myself repeatedly venturing to the coke machine across from the elevator. Several times, he happened to need to slake his thirst at exactly the same moment. Either he is a caffeine addict, or he was itching to see me, too.

My blush of infatuation was tempered with my recollection of a promise I'd made to my sister Beth: After it took me four months to see that Harris wasn't the most giving puppy in the litter, I'd committed to pay more attention before I fell for someone.

After all, if the point of dating is to find out whether this is "someone to build a life with," I had to pay attention to what kind of person he was -- in addition to whether I liked being around him (I definitely did).

After two more weekday lunches, we made the big move to an "evening date" on Saturday night. We went to a movie and then to a coffeehouse with live music. I commented that this was much more my milieu than the place in which we'd first met, where I'd been dragged against my will.

The point of dating is to finding out whether this is someone to build a life with.

I didn't know what to say.

"Some guys are interested when women are haughty and distant. I liked that you seemed real and genuine, at least from a distance," he continued. "So when I saw you, I figured it was worth trying to strike up a conversation. I was surprised that you were rude and snobby after all. But then my attitude changed the night your tire was flat. Anyway, my secretary is the one who convinced me to ask you out. She told me how you pumped her for information about me."

There was a moment of slightly uncomfortable revelation, that electricity that happens when people let down their guards and are real with one another. I felt suddenly shy.

"At the very least," he said, "I'm glad that my initial impression was right. And I'm glad that we're becoming friends."

Whew. Rick Miller is nothing if not honest, I thought. Honest, emotionally available and really nice. Since my guard was already down, I decided to tell him that.

"Rick, I want you to know that I admire how open and honest you are," I said, self-consciously. "I decided recently that 'nice' is a priority for me. And you are really nice."

I thought nice was a killer for a guy.

"Well, I guess what they say about altar boys is true," he said, smiling.

Jessica #10 - Platform Shoes and A Scowl

Jessica #64 - Fast Forward
Near Death Experience Panel
The Western Wall: The Heart of the World
Ask the Right Question: Tisha B’Av
Comments
MOST POPULAR IN Dating
Our privacy policy
Aish.com Is Looking for Great Writers