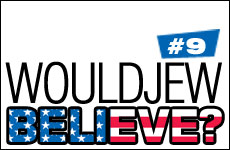 Outrageous, odd and interesting Jewish facts like… the existence of a special Chanukah Beer: 8 Malts, 8 Hops, and 8% Alcohol. L'Chaim!

Legend has it that the dreidel, was actually a ploy used during the time of the Maccabees when Antiochus forbade studying the Torah and synagogue worship. To deflect spies, Jews who were studying in secret kept a top on the table. If a soldier discovered their hiding place, someone would spin the dreidel tricking the intruders into believing they were merely playing a game!
Should you wish to play ... no problem.

The Yiddish word dreidel comes from the German, "drehen," meaning "turn" or "spin".

INSTRUCTIONS: The Yiddish word dreidel comes from the German, "drehen,"("turn" or "spin"). The top has a Hebrew letter on each of its four sides: nun, gimmel, hey, shin, the first letters of Nes Gadol Haya Sham, meaning "A Great Miracle Happened There." (In Israel, the last letter of the dreidel is a Pey, meaning "Here."
Ready? The player spins the dreidel. When it stops, the letter facing up decides your game fate.

BUBBIE AND ZAYDIE ARE COMIN' TO TOWN?

Jewish kinder don't have to sit by while Christian children write Santa. In 1981, writer Daniel Bloom created a letter-writing campaign to Bubbie and Zayde and has since received over ten thousand letters. In 1985, he wrote, "Bubbie and Zayde Come to My House," about these grandparents who fly from house to house on the first night of Chanukah, singing songs and telling stories. In 2006, the book was republished (Square One Publishers), however, the concept has had its detractors among some over the "Santa" similarity. But Bloom, who has lived in Asia for over 25 years, says the letters he receives and answers aren't about gifts, but express excitement about the holiday and hope for a flyby from Bubbie and Zayde. On El Al ... could be the first or the last night of Chanukah – oh and leave out on a plate a bissel bobka (chocolate is best) and two glasses tea!

Had it with sugar shock on holiday wine? One young California entrepreneur, Jeremy Cowan, has solved the problem. The literature major was hit with inspiration: The world was lacking a good Jewish beer! So, in 1996, at age 27, he "hopped" to the rescue and founded the Shmaltz Brewing Company to put out HE'BREW beer. The first, Genesis Ale, he told me, is a "rich, smooth, light brown ale, perfect from Bris to brisket." Messiah Bold followed, along with Miraculous Jewbelation, which he calls, "The most extreme Chanukah Beer ever created: 8 Malts, 8 Hops, 8% Alcohol." L'Chaim!

Jewish actress Bebe Neuwirth, didn't know she was signing on to play a Jewish woman, Dr. Lilith Sternin-Crane, in T.V.'s Cheers. The fact was revealed when a Chanukah storyline was written after she was well into her run on the show. Both she and the writers were unaware of the legendary Lilith in the Talmud and rabbinical folklore. Ironically, the name chosen for Neuwirth in the sitcom, whose character is, well, itchy, bore a strong resemblance to the original image of the Jewish Lilith.

Pat Morita of Karate Kid fame said, "Why not?" he said. "After all, I'm half ju and half jitsue!"

I love being Jewish. ... When I did my first Chanukah special with Lamb Chop, I felt I was really putting my menorah in the window for the first time. " – Shari Lewis. According to author Tim Boxer, when the late great Shari Lewis aired her 1995 PBS special, Lamb Chop's Special Chanukah, she was eager to "put my menorah in the window" to "enrich the lives of non-Jewish viewers." The creative Lewis invited Pat Morita, the Japanese actor who played Mr. Miagi in the Karate Kid to participate. "Why not?" he said. "After all, I'm half ju and half jitsue!"

Lewis, a multiple award-winner, puppeteer, ventriloquist, producer, and author, was a pioneer in children's programming. She used "tough love" on her puppet progenies, Lambchop, Charley Horse, and Hush Puppy, and taught values through entertainment. But her most beloved creation was her daughter and my friend, Mallory Lewis, who joined her mom as writer-producer. Following Shari's death in 1998, Mallory, who is an author, puppeteer, singer, and incredible entertainer, has continued performing with Lambchop. A special fan is Mallory's young son. While Mallory's little "sis" Lambchop adores Chanukah ... she's not too crazy about Seder plates!

My Name Is Mark and I'm a Jewish Date aholic