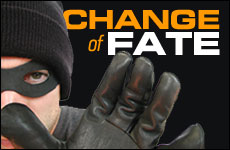 When a burglar tried to enter my home, did my actions earlier that day affect the outcome?

Imagine the feeling of being trapped, all alone, late at night, and the only thing between you and a prowler is a glass door.

Living alone was a real treat for me, after having been at the mercy of roommates who had crazy work schedules and were not the neatest people around. Now I could do as I pleased, stay up until anytime I wished, and no one could tell me what to do. On the other hand, the loneliness and silence was sometimes so saddening, that the only thing to drown it out would be blasting my favorite music. The neighbors never seemed to mind.

One night, after finishing up some late errands, I noticed a strange man following me as I walked to my apartment. I began walking in circles to lose him, but he continued following me. So I mustered up all my courage, turned around and glared at him and snapped, "Are you following me?!" He looked at me with a puzzled expression, and quickly walked away.

I went home and checked all the windows and doors. I noticed that the window outside my bedroom had been moved, but I didn't think too much of it. I went to bed thinking, What I would do if someone broke in? Would I stay inside or run out?

I pulled aside the curtain, to reveal a man standing there.

I woke up to a noise coming from the patio area right outside my bedroom. I had only been sleeping for about two hours, and in my exhausted, groggy state, I casually pulled aside the flimsy curtain on the glass door by my bed, to reveal a man standing there.

My mind was racing. Who is that? What does he want? Are my locks strong enough? Should I take a photo of him? Pretend to sleep? Run outside? I was in a daze, unable to think clearly.

I grabbed my cell phone, which was off, and I pressed the on button. With a flash of light and a sing-song greeting, my room was brightly illuminated and I was sure the burglar had heard the sound and knew I was right there.

The fear in that moment was over-powering. I felt totally trapped, and at the mercy of some unknown menacing prowler who was just inches away from me. Even if I screamed now, no one could hear me. I have never before thought my life was in real danger. I have never felt so incredibly scared, terrified, completely engulfed in a state of fear. It was as if my entire existence was placed into the hands of some evil stranger, and there was nothing I could do about it.

My heart was racing and my hands were shaking, but I managed to run out the other way and call the police and scream for help. Soon the police and neighbors were there with me, and we caught the guy.

After they took him in, they told me to get dressed and come to make a statement. I looked down and suddenly realized my nightgown was little protection from the freezing cold January weather. It all suddenly hit me and I burst into tears.

After giving a statement to police and moving in with friends, I began to get over the shock and fright of what had happened.

I started to think back to the morning preceding the incident. It was my only morning that week to sleep in, but I was woken up by a phone call from an old baby-sitting job. I had given up the job long before, but it seemed to keep coming back to me. The mother asked me to come and watch the kids, and rather than taking the opportunity to sleep a little longer, I ran to go and help her. Just when I was finishing up there, one of my best friends called and said she had cut her finger pretty badly and needed my help. So I took care of her baby while she went to get bandaged, and upon her return, I helped her with the cooking and cleaning she was unable to do. Then I gave away some designer clothing that had somehow crossed my path, to an organization that would give it away to needy people.

After all the nice things you did that day, is this what you deserve?

The next day, when a friend of mine heard about what happened with the burglar, she asked me incredulously, "How could this happen to you? After all the nice things you did that day, is this what you deserve?"

Actually, I think it was my day that saved me from a much worse incident that night. In the end, I was harmed neither physically nor financially.

Perhaps my break-in was "destined" to turn out differently. But precisely because of all my acts of kindness that day, I was able to turn the hands of fate and protect myself from harm.

In the Torah, God tells Abraham that he is "above the stars" and beyond the power of "luck." Abraham and his descendants are able to change their fate, by changing their lives. The power of teshuva, a return or repentance, is that it can literally erase any bad decrees that may have been placed upon a person. Nothing is sealed. Our choices in each and every moment can create a new and promising future.

In the story of Purim, the Jews were slated to be wiped out by Haman, and the decree was signed and sealed. But with the help of Esther and Mordechai, through prayers, fasting, and a lot of courage, the decree was annulled, and Haman ended up being the one who was wiped out. The beauty of the book of Esther is that God's name is never mentioned, but His miracles are present and apparent throughout.

I feel the same in my life.

When crazy "coincidences" used to happen to me, I would sing the little jingle from "The Twilight Zone." Now I strive to live entirely in "The God Zone." There are no coincidences -- just the divine hand of God, guiding me, protecting me, and sometimes even saving me from myself.

For although we cannot change the past, it's always possible to change the future -- to create a new ending to the story.

So when it's my day off, rather than sleeping late or lounging around, I gladly welcome phone calls with requests for acts of kindness. I can sleep some other time. Right now I have an important job to do - to create my future and change my fate.

Increase Gratefulness in Others

Self-Conversations That Enable You to Reach Your Important Goals

Feel Joy When Learning
What Makes Eli Run?
The Tyranny of Materialism
Science Enters the Mysterious Inner World of Consciousness
Comments
MOST POPULAR IN Uncategorized
Our privacy policy