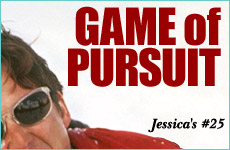 Jessica can't decide. Should the princess go after the knight in shining white overalls or wait for him to show up on horseback?

After the knight-in-shining-white-overalls incident, I tried to figure out in which office Slick Rick worked, so I could thank him again for rescuing me and my flat tire from that deserted nighttime parking lot.

My intention was not to figure out a way to be so dazzlingly nice that he'd have no choice but to reassess his horrible first impression of me and beg me to accompany him on a date.

I just wanted to thank him.

To my chagrin, no one seemed to know his identity, and then I got distracted by the holidays, and then Ellen gave a guy she works with my phone number...

Ellen's guy called after Yom Kippur. We spoke. He asked me out for dinner, and all was well in the world.

It had been a while since I went on a blind date. It took all my strength to keep from bursting out laughing at the moment of meeting: those three milliseconds when we first see each other and try really hard not to let our first impression -- "Oh, he's cute!" or "Uh-oh. He's not so cute." -- register on our faces.

It took all my strength to not laugh at the moment of meeting.

I was impressed that he took me to a fancy shmancy restaurant in Scottsdale named after some explorer rather than the usual let's-see-if-we-click-before-I-spend-money meeting at Coffee Plantation.

He had his cellphone, a Star-Tac, with him. Before we ordered our drinks, it rang -- apparently some friend asking about his plans that night. Then they started to talk about a football game, then about a mutual friend of theirs. Meanwhile, I am sitting there trying to be understanding.

I tried to give him the benefit of the doubt. I recalled Rina telling me that Israelis answer their phones in the middle of movies. So I figured this guy's not so bad. Or maybe his friend is going through some sort of serious emotional trauma and he needs to be supportive.

We ordered our drinks.

Ring! He answers again, starts babbling with a bunch of wazzup's, oblivious to my presence, and from what I could determine from his end of the conversation, there was nothing of tremendous importance being discussed.

Now I begin to stare. He gets off and smiles again.

-- "So, tell me how you came to Phoenix," he says, all easy confidence. "Ellen said you moved here for a job."

If you answer that, I am leaving.

He didn't answer the phone and for the rest of the night, the conversation centered around shirt and towel monograms.

We didn't go out again.

Which brings me to The Pursuit. I was now totally determined to hunt down Slick Rick, the last known gentleman in the Industrialized West.

"So what exactly is your game plan?" Alison asked when I told her I'd come up empty in gathering clues about Rick.

"Okay, but we already knew that."

"It's not possible that you really can't find him."

In point of fact, I did know which office was his. And where his parking space was. And at roughly what time he ate lunch, half the time at his desk, half the time walking the few blocks downtown. And that he grew up here, in Glendale. That he is very close with his brother, who worked for a consulting firm nearby. And that he is much beloved by his secretary. It was not for nothing that I became a reporter, even if I had ended up digging up information on color trends rather than city hall corruption.

"You're just chicken," Alison said, rolling her eyes. "You're going to skulk around and find out everything you can about him to the point that you could be accused of stalking -- and then you'll never get the guts to ask the guy out anyway."

"He doesn't want me to ask him out!" I said, adding in a voice I hoped was terribly serious: "Besides, I think a woman should be pursued, not the pursuer."

Do women ever take into consideration how hard it is for guys to approach us?

I wondered if we women ever took into consideration how hard it is for guys to ask us out, to approach us, to make the first call. We take it for granted and forget how brave they have to be -- and then complain if they come off as arrogant.

Another few days passed. Each sighting of his Honda Accord sitting in its space reminded me of what a timorous wimp I am.

Then, when I drove in this morning, I noticed that he'd washed it after the recent storms.

-- I am noticing when he washes his car, I thought. Alison is right. I am pathetic. And juvenile.

I marched decisively upstairs, feeling terrifically confident and take-charge. Uber-secretary came in and dropped a package on my desk, snapping her gum.

"Someone dropped this off a few days ago. Sorry I forgot to bring it in."

It was a small book on basic car care, with a bookmark on the chapter on changing tires. A business card and post-it were clipped on top.

This is a gesture of friendship.
I am not asking you out.
Unless you want me to.
Rick

Jessica #65 - Into the Crucible
Near Death Experience Panel
The Western Wall: The Heart of the World
Ask the Right Question: Tisha B’Av
Comments
MOST POPULAR IN Dating
Our privacy policy
Aish.com Is Looking for Great Writers