Talking Back to God 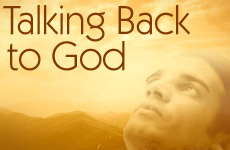 We learn from Abraham that it is possible to have an argument with God and win, and that, indeed, God invites us to dialogue with Him.

These two cities -- and God's plan to destroy them -- provide a supreme challenge to our biblical hero.

Abraham knows that good people do live in Sodom -- among them his nephew Lot and Lot's family -- and he realizes that they, too, will be destroyed. To Abraham, it seems a great injustice that the good should be destroyed along with the evil.

So Abraham questions God. He asks -- and his tone of incredulity is apparent from his very words,

'Will You sweep the innocent along with the guilty? What if there should be fifty innocent within the city; will You then wipe out the place and not forgive it for the sake of the innocent fifty who are in it?' (Genesis 18:23-24)

Thus far, Abraham has been most submissive to the will of God. When God first called him, he said "Yes" without qualification. He left the house of his father, breaking with his family; he made the covenant with God, knowing that this great honor would also bring great suffering to his descendants; he allowed himself (at a time when no anesthesia existed) to be circumcised at the age of 99. (Later, as we all know, he is willing to offer his beloved son, Isaac, as a sacrifice, obeying a command from God.)

Abraham must do what does not come naturally to him -- speak out.

It seems that it was in Abraham's nature to be submissive, that he was an innately gentle, humble man, always welcoming strangers and attracting a considerable following through his kindness and generous heart. But now he is put into a position where he is about to see such a grave injustice done that he must do what does not come naturally to him: speak out against it.

And this gentle man becomes angry with God. He actually accuses God, saying,

Thus he calls God to account -- not submitting, not wringing his hands, not dismissing what is about to happen as the "Will of the Almighty" but arguing, questioning God's intentions, demanding justice. And he wins the argument.

God concedes that Abraham is right. The cities will not be destroyed even if there are only ten good inhabitants. Amazing, isn't it? The Bible is actually saying you can argue with God and prevail.

Abraham teaches us that a meaningful relationship with God is a partnership. We are allowed to question, to speak up, and God pays attention.

It is important to note that Abraham was a person of great faith. You cannot live your life according to your own rules and then, when things go wrong, accuse God of unfairness. But if, like Abraham, you live a life of faith, you are allowed to question. And you are not only allowed to question, you are mandated to question. So go ahead, speak up!

SPEAKING OUT AGAINST EVIL

Tragedies occur all too frequently because people find it too hard to get involved.

Tragedies occur all too frequently because people find it too hard to get involved. But "I should have" is meaningless after a person dies or is irreparably harmed. It is just this kind of behavior that has led to the vast changes in the laws surrounding child abuse.

In one case I shall never forget, a boy of eight was so brutally and systematically beaten by his mother over a period of years that when he finally died, the coroner was at a loss to find the one injury that had caused his death. He had serious injuries to his kidneys and liver, internal hemorrhaging, broken bones -- old and new -- and skull fractures.

He had been seen by school nurses, teachers, neighbors, and social workers and had been treated in various emergency rooms on several occasions. Yet the soul searching did not begin until after he died.

Another example. Some years ago, I was shocked to read about an incident in Germany where neo-Nazi youths attacked a family of foreign laborers from Turkey. They threw a firebomb into the home where the family was sleeping, and by the time the parents managed to get all the children out, they were badly burned.

The parents were screaming for help in the street, trying to cope with the terrible injuries to their children. No one came to help them. People looked out to see what was going on, but not one soul went over to offer aid or comfort.

Now, I would expect that these lookers-on pay their taxes on time, mow their lawns, put out the garbage, and obey the law. If you asked each one of them about himself or herself, he or she would claim to be a good person. And yet ...

SPEAKING UP IN EVERYDAY LIFE

While we can all cite examples we've read in the newspapers of harm done because people minded their own business, opportunities to speak up arise for us all quite frequently.

The most obvious example of taking responsibility is not allowing a friend -- or even a stranger -- to drive drunk. It can take real strength of character, even courage, to risk a friendship when someone does not want to be persuaded. It is so much easier to mind your own business.

Yet it is out of seemingly simple, everyday acts such as this that the strength to tackle much greater challenges is born. This strength does not spring up overnight; it is nurtured little by little.

And when the time comes, we are ready to battle the worst of evils because we have been getting into shape for it little by little -- by voting, speaking up when need be, minding our community's and our country's business, and, as partners with God, keeping up a dialogue with Him that enables us to face all the challenges we encounter.

Rabbi Levi Meier is the chaplain of Cedars-Sinai Medical Center in Los Angeles and a clinical psychologist in private practice. The above has been excerpted from his book "ANCIENT SECRETS: Using the Stories of the Bible to Improve Our Everyday Lives." To purchase Rabbi Meier's book click here

Feeling the Love on Rosh Hashanah

The Messiah in Judaism

Q&A: Why Judaism’s Attachment to the Land of Israel?

Unmasked: Purim and the Meaning of Anti-Semitism

Why Jews are the People of the Moon
What Makes Eli Run?
The Tyranny of Materialism
Science Enters the Mysterious Inner World of Consciousness
Comments
MOST POPULAR IN Spirituality
Our privacy policy