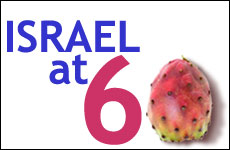 There are no answers, only improvisations.

To be an Israeli at the time of the state's 60th anniversary means to be resigned to living with insoluble emotional and political paradoxes. It means living with a growing fear of mortality, even as we celebrate our ability to outlive every threat. We are almost certainly the only nation that marks its independence day with an annual poll that invariably includes the question: "Do you believe the country will still exist 50 years from now?" Most Israelis continue to answer in the affirmative, precisely because we know that the odds have always been against us, and that we have thrived in the face of dangers few nations would likely have survived.

We are still "the only country" -- the only country whose borders are not internationally recognized, the only country whose capital city has no foreign embassies, the only country expected, in negotiations, to yield tangible assets in exchange for mere recognition of our existence, the only country on which a death sentence has been passed by some of its neighbors. Terror enclaves impinge on our borders, while the threat of a nuclear Iran grows. Our wars have shifted from the battlefront to the home front. Katyushas on Haifa and Ashkelon, exploding buses in Jerusalem: The inconceivable has become routine.

As the jihad against us intensifies, we long for the ever-more elusive promise of normalization. Perhaps only now, in our fitful late-middle age, do we realize how touchingly naïve it was for the Zionist movement to imagine normalizing the Jews by creating the only non-Muslim state in the Middle East, in a land holy to three competing faiths, in proximity to the world's most coveted oil fields.

To be an Israeli at 60 means to be proud of unimagined achievements, of being a world innovator in science and technology, of being second, just behind America, in the number of high-tech start-ups represented on the NASDAQ. And it means carrying the shame of chilul, desecration of the name "Israel." We have allowed ourselves to be represented by a president accused of rape, a prime minister voted the most corrupt politician in the country, a deputy prime minister convicted of molestation, a former finance minister accused of massive embezzlement. Other countries may have leaders even more corrupt than ours. But that is no comfort for a people facing life and death decisions, and repeatedly summoned to sacrifice far beyond the capacity of any other Western citizenry.

This is the third time in less than a century that the Jews find themselves on the front line against totalitarian evil -- Nazism, Soviet communism and now jihadism.

In our late middle age, most of us are wary of the notion of fulfilling the biblical imperative of becoming a light onto the nations. "Let's first be a light to ourselves," we say. Still, we suspect that we may be a light after all. In our war against the suicide bombers, we proved that a consumerist society can defeat terrorists and reclaim its public space -- an historic victory for the world, even if much of the world doesn't know it.

This is the third time in less than a century that the Jews find themselves on the front line against totalitarian evil -- Nazism, Soviet communism and now jihadism. Each of those movements aspired to remake humanity in its image, and each defined the Jews as its main obstacle. It is difficult to celebrate that pattern of enmity, but understanding the nature of our enemies should, at least, give us confidence in the essential rightness of our cause. By being the front line against jihad, Israel is performing the work of tikkun olam, helping to heal the world.

Not only are we fighting this war while bereft of inspired leadership; for the first time in our history, we lack a vision that can summon a majority of Israelis.

One after another of our ideological certainties have collapsed. The dream of "greater Israel" ended in the first intifada; the dream of "peace now" ended in jihad. Finally, there was the hope of unilateralism: If we can't occupy the Palestinians and we can't make peace with them, we can at least determine our own borders. That fantasy ended with the missile attacks from Gaza. Now there are no answers, only improvisations.

Still, in place of ideological certainty there is hard-won sobriety. Most of us would make almost any concession to end this conflict and achieve genuine recognition of our legitimacy. But most of us realize that, at this point in the conflict, no concession will bring us that recognition. The left has won the argument over concessions, the right has won the argument over peace. For the first time since the Six-Day War, we are facing reality without ideological blinkers. The collapse of ideologies depresses, but also clarifies: Finally, we understand the complexity in which we live, and that enables us to cope.

To be an Israeli at 60 means to acknowledge that our internal conflicts over identity can only be managed, not solved. As a modern state in a holy land, we are fated to remain at once secular and religious, without a decisive tilt in either direction. And with Arabs constituting over 20 percent of our population, we are fated to be both a democratic state and a Jewish state, aspiring to somehow include all its citizens in its national identity while maintaining responsibility even for Jews who are not its citizens.

No less extraordinary than the multiple fault lines in the society is the fact that the society is holding. We have survived the murder of a prime minister, and the uprooting of thousands of our fellow citizens from their homes in Gaza. We know our capacity for self-devouring, the Jewish yetzer harah, evil temptation. The vast immigration waves of the last two decades, from the former Soviet Union and Ethiopia, have yet to be integrated. But we know, too, that the ingathering of the exiles has its own momentum, and that, somehow, a people is being formed out of disparate and even antithetical communities.

To be an Israeli at 60 is to be at once disappointed and awed.

To be an Israeli at 60 means to be privy to a secret that most diaspora Jews don't know and which we often don't acknowledge even to ourselves: Israel is a great place to live -- to cherish the informality, the vitality if not the rudeness, the endless surprises and permutations of Israeliness. Within unbearable tension, we have created ease. The food is great, the humor beyond politically incorrect. Hebrew culture scandalizes the sacred and sanctifies the mundane.

Most of all, we sing. Every kind of song is created here. The musical encounter between East and West -- elsewhere designated as "world music" -- here is simply Israeli music. And in recent years, God has become a major protagonist of Israeli rock, confounding our notion of a nation divided between "secular" and "religious." The old sentimental patriotic songs are kept alive in mass sing-alongs around the country, and by new hip-hop and reggae versions. The more desperate the situation becomes, the more exuberantly Israelis sing.

To be an Israeli at 60 is to be at once disappointed and awed. It means being primed for surprise -- an emergency airlift of a remote Jewish tribe, missiles on Tel Aviv, an Arab leader seeking peace in Jerusalem. It means that, even as we grow wary of the mythic, we still feel privileged to live in the ultimate Jewish myth.

Yossi Klein Halevi is a senior fellow at the Adelson Institute for Strategic Studies of the Shalem Center in Jerusalem, and the Israel correspondent of the New Republic.

Rise Up from the Ashes

My Gaza War Diary
In the Shadow of David and Goliath
Where Do the Laws of Nature Come From?
Saadiah Gaon, Rashi and Maimonides: How Three Rabbis Revolutionized Judaism
Comments