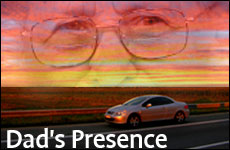 Now I listen to Dad better than ever.

I tell people, only half in jest, that my father and I have never gotten along as well as we have in the past two years.

I listen to him now. I take his advice. I mull over his words. And I never interrupt.

When he was alive, he used to tell me all the time how I interrupted him. "My darling daughter, you're doing it again," he'd say. "I wasn't finished talking, and you're stepping all over my words." He believed this because he viewed comments such as, "No way!" "Really?" and "She did not!" as interruptions, while I perceived them as necessary interjections.

He also said that I did not pay enough attention to him. For example, he insisted that I not do the dishes or cook or water the plants or fold clothes while talking on the phone. "I can't hear you if you're making a racket," he said.

"But, Dad," I objected. "How can folding clothes make a racket? Besides, you called me!"

"My point, exactly. I called and you should stop what you're doing and sit down and talk to me."

I didn't stop. All the years he was alive and arguing with me, I simply argued back.

Two years ago, when he came home from Morton Hospital, I bought a fitted white sheet and a down comforter and two pillows for the bedroom his wife, Louise, had prepared for him, for the bed in which he would die.

I walked through the parking lot on that beautiful, late September day, the sun bright and warm, my arms heavy with bags, and I imagined my father young and my mother pregnant, shopping together for me - for small sheets and soft blankets and a tiny pillow. Carrying them back to my grandmother's where they lived, walking up the steps, making up the crib and standing back and anticipating their lives, so many years stretched out in front of them, so many wonderful dreams.

They would be hard years. And they wouldn't stretch as far as they hoped. But the mercy, the blessing, is they didn't know that then.

From beginning to end is always too short a time.

As I watched my father die, I thought about this, how you can never anticipate life or death, and that what looks like a long life when you're young seems so much shorter when seen through a rearview mirror.

From beginning to end is always too short a time.

My father isn't on the phone giving me a hard time anymore, saying, "When are you coming to visit?" and "You didn't call yesterday."

"Do you know that no one else in the whole world can call you daughter?"

Because she feels him near her, too.

"Don't you even think about cutting the grass in sandals. Go put on sneakers like I taught you."

"If you put it back where it belongs now, you won't have to search for it later."

He's gentler now. But still firm. And still instructing. "Get gas. Don't park the car on empty. There could be an emergency."

He's not a ghost like in "The Ghost and Mrs. Muir." I don't see him. And I don't really hear him, either. Not with my ears.

But his words are real, not just a loop of his favorite sayings repeating themselves in my mind. He is current.

And his presence is not mere imagination.

Like rain that falls on the earth, or snow that blankets it, my father was present, visible, real to the touch. And now he's not.

But like rain and snow, like everything that was, he hasn't vanished. He's transformed. I don't understand what he is now. But I know that he is.

I feel him looking over my shoulder. I sense him beside me.

I went to visit his brother the other day. He and his wife were in town for a short visit, and George never stopped talking. But I didn't interrupt, even when he said, "I'm talking too much, I know."

I expected some praise for this but all my father said on the drive home was, "My brother really is a character." And I said to the air, to the sky, to him, "I know, Dad. He's a lot like you."

Passover: Days of Future Past