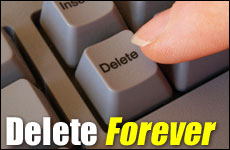 Yom Kippur enables us to wipe out our soul spam.

When spammers got hold of my email address, I started receiving all sorts of unsavory email messages, muddling my inbox into one giant moral morass. I was afraid to open my inbox for the sheer unpleasantness that the blurbs on the emails evoked.

When I switched over to Gmail I was delighted. My inbox was unpolluted and my new IP address seemed to have fallen out of the spammers' date books.

Then I discovered the SPAM folder. The spammers hadn't forgotten about me after all. Gmail was just kind enough to filter them out.

I was about to delete those nefarious characters when I saw another interesting alternative: Delete Forever.

I loved the sound of it. The finality! Not only could I erase all vestiges of the offending intrusions but I could send them off to some eternal slumber from which apparently there would be no return.

I gleefully highlighted the emails and passionately left-clicked the offenders into oblivion. I wondered where they could possibly be going. Was there a central computer which erased the messages in one irrevocable swoop? But where did they go from there? The delete forever function on my Gmail was causing me cyber-existential-angst.

And it reminded me of another type of deleting I often try to do.

Every year during the ten days of repentance, a vague unease with myself begins to simmer as I reflect on my misdeeds of the past year, and as the High Holidays come around, it comes to a rolling boil.

It is the time for teshuva, repentance. A time specifically set aside for reclaiming our lost innocence by regretting what we've done wrong during the past year and committing ourselves to getting back on track. Part of me often wonders: can it really be done? Can a stain on a soul be so thoroughly cleansed through atonement so as to render it completely unsullied? It must be sitting in some celestial Spam folder of the soul, still there, just not as obvious.

The Talmud tells us that you can get rid of your transgressions for real. A person can do teshuva at any age and receive full forgiveness, no matter how far he or she has strayed. The sins are deleted forever, sent to some undisclosed destination, never to be viewed again. They are not saved in some dark corner of your soul for future reference. They are absolutely, positively gone.

During my years of teaching Jewish thought, I've had some pretty sad looking freshman students pass through my turnstile. Some of them lacked direction, others had difficulties with friendships and still others just didn't seem to fit in anywhere.

All of those things were fixable. But when a girl would come to me with her sense of self worth leaking out all over the place, I knew we would need more than a patch to fix the problem.

"I've treated my parents like dirt for the last four years, so I'm dirt too."

"I'm horrible. I spent all of high school doing everything for popularity not caring who I stepped on. I'll never be a nice person."

"I did disgusting things that make me feel sick when I think about them. I have zero self respect. I'm a nobody."

The only thing these girls were missing was the belief that real change was possible.

But they were wrong. Because God didn't view them in the same way that they viewed themselves. They had reached the first stage of regret. Now He was waiting for them to pick up the pieces. The only thing these girls were missing was the belief that God could really take them back. The belief that real change was possible.

The Talmud discusses Rabbi Elazar ben Durdaya who sunk so low he committed the most despicable sins, and only in the last moment of his life did he repent. And God accepted his heartfelt teshuva, earning him a lofty place in the World to Come.

Surely we can do it too.

You cheated in business? First pay back your debt. Now you can start the teshuva process.

First you have to regret what you've done. Easy for some, but translating it into action is less so, because then you have to stop doing the sin. Then confess the sin directly to God, and finally, resolve to never do it again in the future.

When you have genuinely accepted and performed all of these steps, you have effectively deleted the sins forever. Don't replay that business deal in your head again. It is no longer real in God's eyes and if God's giving you another chance, don't you think you ought to give yourself one as well?

Teshuva is the car wash for our soul that removes the grime and lets us shine.

You feel badly about a life mired in promiscuity? You can regain your inner compass and reclaim the self respect that you deserve through the teshuva process.

You were self-serving, egotistical, slandering, back stabbing, or deceitful?

Nobody said it was easy. You can't just highlight the page in yellow and click on your mouse. Real change is an arduous spiritual process, grounded in genuine soul searching and remorse. And remorse hurts. But it also heals.

You can recoup your self respect. We all can.

How? Teshuva the Delete Forever for your soul spam.

How Strong a Person are You?

Look in the Mirror

Was That Odd, Or Was That God?
Lokshen Noodle Kugel Recipe
G-d Time
Shavuot is The Holiday of Cheesecake and Blintzes
Comments