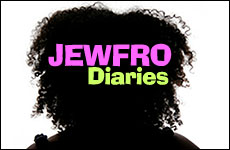 How I learned to love my crazy Jewish hair.

Everyone has a bad hair day.

Through a quirk of heredity (and several thousand years of Jewish in-breeding) I was doomed to a bad hair life.

It started hopefully enough. I was born bald. But soon, little spirals appeared, which quickly sprouted into Brillo. "I can't get a comb through it," chirped Mom-the-optimist. With visions of an aging Shirley Temple dancing in her head, she thought those coils could qualify me to sing On the Good Ship, Lollypop. But finally even she had to face it. Without the voice, the face, the talent, Shirley would've been just another kid with kink. In other words, me.

Given my mazel, I grew up in the fifties, where I'm sure the infamous "blacklisting" extended to any person "reported" to having a hint of "kink."

High school was worse. Any human who couldn't torture her hair into bangs and a bubble was relegated to "Jimmy-the-geek's" table in the lunchroom. I spent three years choking down my tuna next to one kid whose nose was like the Trevi fountain, two mouth dribblers, and five other similarly hair-challenged sisters: Marci and Miriam Cohen, Shana Marcus, Angela Palmieri, and Tawanda Washington. The school told us we needed two more to start a support "club."

So, I gathered up my pluck and tried. No. I mean I really really tried. If I add it up, I spent more time "trying" than I spent finding a husband, building a career, and working for world peace. I went through more gelt, and used more "weapons" in the Holy Hair War than the U.S. spent seeking WMDs.

I used way more effort "training" my locks, than training my brain. Was this to be my life's work?

GUIDANCE COUNSELOR: "So Marnie, in planning colleges, what job do you see yourself doing in five years?"
ME: "Umm ... Hair De-frizzer?"

Because every week our medicine cabinet was exploding with yet new "stuff" -- "Frizz Zapper" "Out Curl Out!," "Tough On Tangles," "Fifty Minute Manager" and "Miracle Cure" containing ingredients like yak urine and rhinoceros placenta--not to mention blow dryers capable of hurling Toto back to Oz.

I went to hairdressers who clucked, gave me diagnoses that would make Dr. Kevorkian shudder, then lopped (or "layered") my tresses like a tumor, murmuring words like "hopeless," and "last resort."

I ripped-off empty beer cans from trash bins to use as rollers, ironed my locks ("cotton: high"), slept with enough barbed wire to keep illegal aliens from slipping through the entire Canadian border, applied chemicals, perfect for warfare (which caused half my frizz to decorate my sheets), and single-handedly turned the World of Wigs into a Fortune 500 company.

Until the barometer climbed to "five" and, like wayward macaroni "soldiers," my strands would break training, revolt, and go "Boing!"

Ah! But then came the glorious sixties and seventies!

But then came the glorious sixties and seventies!

We wore love beads, cried "Peace!" and we "corkscrew kids" marched with our African-American sisters and signed treaties with our tresses. Free at last!

Suddenly, my evil "Frizz" became the fashion. And it even had a name - A Jewfro!

Oh, the joy when our modern queen, Barbra, boinged back to "The Way (She) ‘Was'" at film's end,

My time had come! Hallelujah!

"Would I do this to myself on purpose?!" I replied, in shock. (Old neuroses die hard.)
"Do you know how lucky you are?" they added, launching into a blow-by-blow of all the fortunes and hours they spent on perms, hot rollers, "Curl Is Me" and "Limp No More" gels, mousses, and glop.
"Yes!" I thought. Now it's your turn to spray and shpritz! Your turn to get migraines from wiglets, and scalp burn that rivals Three Mile Island, so you can "look like everybody else!"

But, as with most things in life, the winds of change blew yet again.

Well, I did have a 10-year ride, which, for us Jews, is a lifetime. What to do? Wait...I thought. Am I not the daughter of Sarah, Rebecca, Rachel, and Leah? Bold, Brave, and Courageous? A blend of matzoh and chutzpah?!

Had my 10-year reprieve taught me nothing? That my kink, gave me quirk? My frizz, zest? My "coils," confidence?

Should I not be like the wandering Jew (the plant ... and us)? A hardy bloom that thrives and grows in shade or sun, is sometimes out of bounds, but wildly colorful, with strong roots -- and "beautiful" with just a little trim?

That was it! I donated my glops, gels, pastes, and sheep intestines to medical science, recycled my 2,000 beer cans, shredded my wigs, and, along with my Mega curling irons and Mazi blowers, shipped them to a very cold third world nation.

Now I stand short, loud, frizzy, and proud, singing the sixties showstopper "I Gotta Be Me" that became a hit for (who else?) Sammy Davis Jr.

After a battle that's lasted a lifetime, my Jewfro and I are now one.

DISCLAIMER: The author wishes to state that the above is not meant to imply that all Jews have frizz, or that only Jews have frizz. Nor is it meant to perpetuate any "stereotypes" of the Jewish people, as some studies suggest there is no ethnic truth to the stereotype. (But go tell that to half the Jewish girls I know, not to mention, Adam Sandler, Seth Rogan, Howard Stern, Gene Wilder, and Albert Einstein

The Ins and Outs of Jewish Fundraisers

Ahmadinejad: Iran Doesn't Have Tyrannical Dictators
Korach 5782: Visit to Lift the Spirit
That Time The Ivy League Found A Way To Limit Jewish Enrollment
Would You Rather Be Right or Happy?
Comments
MOST POPULAR IN Jewlarious
Our privacy policy