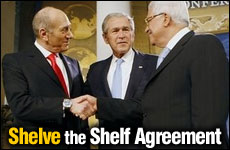 A performance-based peace process remains the only proven and sustainable model towards a durable final settlement.

Under this conceptual framework, Israel is to negotiate an "agreement in principle" on an "endgame" solution with moderate Palestinians, but then place this agreement out of their reach -- high up on a "shelf" where the Palestinians can see it, but not yet attain it. Only when the Palestinians have matured and fulfilled all their "implementation" obligations will the transcendent trophy come down off the shelf.

The negotiations are predicated upon the realization that Palestinian leaders currently are completely unable to deliver on any of their obligations under the "old" road map. Consequently, parties to the conflict are ignoring the messy here and now and instead turning their attentions to the political "horizon." In the context of shelf agreement theory, the parties seek to give the Palestinians a clear picture of the big prize awaiting them in the future (the "horizon").

The novel theory predicts that Palestinians will be encouraged to play according to the rules of the game in order to attain their prize. The theory furthermore postulates that the moderates who want peace will be strengthened by a shelf agreement, and then they'll be able to do the difficult things demanded of them in the accord -- such as confronting the terrorists in their midst and building reliable institutions of uncorrupt government.

All this makes for nice, but seriously flawed and completely untested, theory.

To begin with, the shelf agreement negotiations assume best case scenarios regarding the intentions and capabilities of a future Palestinian state. Aside from the fact that this may have no basis in reality, it is tactically counter-intuitive and strategically unwise. Endgame talks ought to take into account all worst case scenarios.

Any defense lawyer conducting a negotiation on behalf of a client will tell you that an agreement will be final and durable only if safeguards are built in that ensure the agreement's ability to withstand most performance failures. For Israel specifically, this means a wide margin of error on security matters if the Palestinian state fails to eradicate Palestinian terrorism against Israel.

But how can Israel, for example, sign a sustainable endgame shelf agreement with workable border crossing arrangements if it does not know the character or capabilities of the future Palestinian entity -- and all it can do is assume the "nice" qualities of such?

Israel is negotiating against itself in a vacuum with a phantom Palestinian partner.

The type of Israel army-police presence needed at the border checkpoints depends on the reliability and capabilities of the Palestinian partner. But since the shelf agreement approach throws the requirement for Palestinian reform and performance into the amorphous future, Israel has no way of professionally knowing now how to calibrate its minimum security needs on the borders.

To simply assume -- as the current negotiations do -- that the planned Palestinian state will have outstanding, professional, loyal and determined anti-terror fighting convictions, is to flirt with folly.

This is just one example. There are hundreds of similar matters that currently cannot be assessed, because Israel is negotiating against itself in a vacuum with a phantom Palestinian partner. Israel is seeking to will into existence a "moderate, stable, capable and democratic" Palestinian government -- that does not yet have a foothold even the in West Bank, not to mention Gaza.

Contrary to shelf agreement theory, it should be obvious that a final status agreement only can be negotiated the other way around: with a Palestinian partner that has proven its mettle over time. In the absence of this, it will be impossible to reach sustainable agreements even on "small ticket" technical matters -- never mind the major issues.

Shelf agreement theory unhappily fails in a second critical area: it ignores the historical record. Experience attests that with the Palestinians, negotiations are never over.

Even if Israel and the PA were to grasp the fabled horizon, and royally set the grand "final status" agreement in a jeweled case high up on a shelf of honor - the Palestinians would not begin "implementation"; they would proceed to bargain with Israel for additional concessions as the price of implementation.

For example, if Israel promises to forgo half of Jerusalem and dozens of Jewish towns in Judea and Samaria -- it might still be expected to yield further concessions in order "to keep the process alive and the Palestinian moderates in power."

And thus, Washington and the world community will demand that Israel go beyond the "ultimate" sacrifices it already had made in order to secure the supposedly "final" shelf agreement.

In sum, there will be nothing "final" about an agreement with the Palestinians. They will "pocket" Israel's verbal and written concessions, then press for more as the price for "implementation" on their part, or as the price of "buying in" other Palestinian factions.

This has been the repeated pattern of Israeli-Palestinian negotiations, after each of the Oslo era accords. Even Likud Prime Minister Benjamin Netanyahu, who sought to drive a hard bargain and insist on reciprocal concessions, was forced to "sweeten the pot" for the Palestinians in order "to keep the process alive and the Palestinian moderates in power" after signing the Wye Accord with Arafat's regime.

It makes no sense, then, for Israel to offer "endgame" maximum concessions in a shelf agreement negotiation.

A Disincentive for Implementation

A shelf agreement would prove a disincentive to Palestinian implementation.

It seems completely predictable that at some point the Palestinians will defiantly "climb up the shelf" and independently snatch their "horizon" - without having completed the promised chores on security and government reform. The Israeli public will likely rationalize that since it already acquiesced-in-principle to the particulars of a full-fledged Palestinian state, it is not worth an ugly fight over the chores of implementation.

And thus, Israel will find itself at tremendous diplomatic disadvantage, in a situation where it will be well-nigh impossible to block the emergence of a runaway Palestinian state that has not lived up to many of its key commitments that constitute Israel's security safeguards.

This unfortunate scenario seems likely because the record of Palestinian compliance with treaty obligations is thin. How many times have "moderate" Palestinian governments promised to collect weapons, disband militias, arrest terrorists, reform government and educate for peace - yet failed to do so. Years later, Palestinian leaders make the same promises again in exchange for more Israeli concessions.

There is little basis today for believing that the current Palestinian government will have the resolve to bite the bullet on these issues - even if it is theoretically "strengthened" by the halo of a shelf agreement. There is no indication that the Abbas government, or any future PA governing coalition, will be willing to go even further and explain to its public that the West Bank and Jerusalem must be shared, or that the "right" of return must be set aside.

Indeed, the idea that weak leaders can negotiate a shelf agreement because the "concessions" demanded of them are conditional, and that in turn the agreement will strengthen them -- is bizarre. There is no support for this idea in academic negotiation theory or any precedent for this in world politics.

Only strong leaders, such as Begin and Sadat or Rabin and Hussein, can make the reciprocal concessions needed to reach a genuine peace agreement; and then successfully implement them. Abbas has no ability to withstand Hamas accusations of "treason" should he concede to Israel on anything significant.

Moreover, the recent Sana'a Declaration, an attempted rapprochement between Fatah and Hamas negotiated in the Yemeni capital, places the entire strategy of "strengthening the Fatah moderates" into question. If Fatah and Hamas renew their collaboration, little room is left for Israel to build up Fatah at the expense of Hamas.

Notwithstanding all of the above, the push for a shelf agreement might have validity were it to offer the theoretical possibility of a real resolution that would rope in the vast majority of Palestinians. But that is no longer the case.

With the military takeover of the Gaza Strip by the radical Islamic Hamas movement that is openly committed to Israel's destruction, Gaza has become a mini-Palestinian state unto its own, and it answers to no other Palestinian "Authority." Thus the two-state paradigm on which the "shelf agreement" concept rests seems an anachronism.

Moreover, the Hamas-Israel conflict inevitably will yet involve a significant military confrontation, a reality that will make Israeli-Palestinian rapprochement in the West Bank tenuous at best.

And finally, Israelis have little incentive to offer "endgame" maximal concessions to a Palestinian Authority that does not control Gaza and cannot guarantee quiet on that front too.

The impatient hunt for a "horizon" or "shelf" agreement is without precedent in world politics -- and for good reason. Shelf agreement theory is academically non-existent, strategically illogical, and tactically ill-considered. It is based on faulty, and for Israel, dangerous assumptions. Contrary to the hopes of its inventors, a shelf agreement could be a disincentive to peace.

Of course, the maintenance of some sort of "peace process," no matter how flimsy, is beneficial to everybody in the Middle East. It upholds a modicum of forward momentum towards a resolution, and prevents Palestinian-Israeli relations from boiling over into large-scale conflict. It could and should beget some improvement in everyday "quality of life" both for Palestinians and Israelis. In the long run, Israel needs peace no less than the Palestinians.

However, Palestinian-Israeli relations have suffered enough from all kinds of failed experiments in negotiations. A performance-based peace process remains the only proven and sustainable model towards a durable final settlement. There is little choice but to tough it out the old-fashioned way: building confidence between the parties by measured, verifiable and concrete steps along a road map towards stability.

13 Facts about Israel & the Middle East

Ben & Jerry’s Unfair Boycott of Israel
Should I Break Up, Get Engaged or Keep Dating?
Time Is Your Precious Commodity
A Constant World in Flux
Comments
MOST POPULAR IN Israel
Our privacy policy