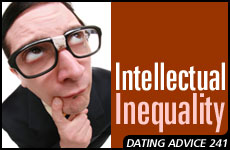 Can she build a life with a man who is not providing intellectual stimulation?

I'm dating a guy and I think he's great. He's generous, kind, loving, and treats me well. There's just one problem: I don't think he's very smart! The last guy I dated was by far intellectually superior, and I got used to being more stimulated in that department.

My current guy has very simple views on life and doesn't really take on intellectual challenges. I think that might be preventing him from growing. I'm not sure I will be able to respect him in the long term. Am I being petty?

Before we explain this further, we'd like you to ask yourself a series of questions about your friendship with this man:

After you've answered these questions, we'd like you to think about the following observations we've made over the years in working with couples:

If you can communicate and relate well to each other on a day-to-day basis, and feel that you can connect deeply in certain areas, your relationship may be very satisfying. It isn't necessary for your partner to fulfill all of your intellectual and emotional needs. In fact, that's a mistake many people make when they are dating, or even when they are newly married. In reality, though, sometimes people can communicate well with each other, but they have different intellectual interests. She likes to talk about esoteric topics, or he's an abstract thinker and she's more practical, or he's fascinated by politics and she by relationships or business. Consequently, each finds the intellectual stimulation they enjoy with colleagues or friends.

Often, someone who appears to be a simple thinker actually has other kinds of intelligence. (Did you ever see the movie "I.Q.", in which a man with superior spatial and mechanical abilities pursued a woman with high verbal intelligence?) The man you are dating may have a lot of "emotional intelligence." He may also be able to understand and absorb new information, but be content with the way he views life and doesn't want to challenge it. It's also possible that he is capable of growing intellectually, but is afraid to try because he lacks self confidence or has a learning disability.

The fact that he may not be "growing" is frustrating to you because you are comparing this to your former relationship, and you expect the same type of intellectualism from the man you are currently dating.

It could happen that in the future, he does become more interested in growing intellectually. But this is not something that you should expect or insist upon -- the desire to learn and to grow has to come from within him. You may decide that you can be fulfilled and satisfied with your relationship as it is. However, if you are still troubled by the different intellectual levels, we don't think you should invest more than a number of weeks, if that long, into trying to come to terms with this difference. That's because if a person cannot come to terms with a major point such as this within a matter of several weeks, he usually cannot come to terms with it at all. We've seen people try for months to do so, because they see so many positive qualities in the person they are dating. But all they end up doing is prolonging an inevitable break-up.

We hope you will soon be able to decide if this is the right man for you. With our best wishes,

Dating maze #281 - Negative Father Image
Vayelech 5783: Regret and Repent
Rabbi Sacks: Focus On the Important, Not the Urgent
Put Your Foot Down: Are Human Feet Poorly Designed?
Comments
MOST POPULAR IN Dating
Our privacy policy
Aish.com Is Looking for Great Writers