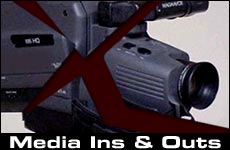 Mideast events become world news because journalists choose to write about them. Anti-Israel bias, therefore, begins in the 'what' of reporting, well before the 'how.'

Consider this week's coverage of Israel ― what topics made their way to worldwide readers, and what was left out:

IN: The major news story this week was an Israeli plan to build new apartments in some existing West Bank settlements, and a statement of flexibility on this matter from the Bush administration. Striking headlines encouraged readers to become alarmed over the events and understand them as 'undermining peace' - for example:

OUT: No major news outlet bothered to remind readers that Israel officially accepted the road map with 14 reservations ― foremost among them that "the complete cessation of terror, violence and incitement" and "the emergence of a new and different leadership in the Palestinian Authority" are preconditions for moving forward. Neither of these conditions, of course, has been met, so Israel has not broken any commitments.

Moreover, this week's statement by the U.S. official was very much consistent with President Bush's April 14 announcement that 'new realities on the ground' make it 'unrealistic' to expect Israel to abandon major West Bank settlements. So the major architect of the road map, the U.S., agrees that existing, large West Bank settlements are simply not an obstacle toward making peace. Why do media outlets continue to insist they are?

IN: Amid the wave of articles on Palestinian prisoners' hunger strikes, AFP indicates that Mahatma Gandhi's grandson visited Israel and will fast for one day in solidarity with the prisoners. The Guardian goes so far as to state that the elder Gandhi himself 'would undoubtedly have appreciated the concept of jihad' against Americans and Israelis. These prisoners, held for terror involvement, are thereby likened to the great figure of modern non-violent resistance.

OUT: The fact that many Palestinian prisoners continue to plot terror from behind bars  is not even mentioned in the AFP article, and given scant mention elsewhere in the press. An officer from the Israeli Prisons Service says, 'We have often found [during body searches] maps of the prisons or routes of buses carrying prisoners to court. The aim is clear: carry out a terrorist attack.' And why are many prisoners 'cruelly' denied cell phones - one of the reasons for the hunger strikes? 'They intend to give orders for terrorist attacks,' says the superintendent of the Shikma prison, Yosef Mikdash.

Moreover, Marwan Barghouti, the convicted Palestinian terror leader who is one of the organizers of the strike, was caught on tape (at right, with plate) eating a secret meal behind a curtain while his fellow prisoners denied themselves food on his order. Barghouti's act would seem to demonstrate the cynical, PR intent of the entire strike, yet world news agencies didn't even bother reporting it.

IN:   On Monday (Aug. 23), the Washington Post published a front-page, largely sympathetic profile on Zakaria Zbeida (pictured at right), one of the most wanted terrorists on Israel's list and the man responsible for dozens of murders of Israeli civilians. This was the second recent front-page article by the Post's Molly Moore on Jenin thugs (the first was on July 19). In the earlier piece, Moore described one terrorist as "a towering man with limpid eyes the color of rich toffee," and Monday's article describes "Zbeida's skin...the color of roasted pecans."

OUT:  On Aug. 24, one of Arafat's Fatah gunmen was caught by Israeli undercover troops as he hid in the safe haven of Bethlehem's Holy Family Hospital. Endangering patients and hospital staff alike, Adnan Abiyat and another Fatah member were found in the hospital laundry room with a machine gun, six rifles, and a quantity of ammunition. World media outlets (AFP, BBC) reported merely that the "operation occurred near a maternity hospital," and ignored completely the arms cache held below hospital beds.

The use of hospitals as a hiding ground for military action is in flagrant violation of the Fourth Geneva Convention, which places particular emphasis on the immunity and neutrality of medical installations. Why is international law invoked by the media only when Israel is the supposed violator?

Thank you for your ongoing involvement in the battle against media bias.

Anti-Semitism Gets you Fired by Labour, but Hired by NYT

2006 Dishonest Reporter of the Year Award

The Ms. Magazine Controversy
Bechukotai 5782: Divine Retribution
Behar 5782: Working to Live or Living to Work?
The Wholeness of Being Broken
Comments
MOST POPULAR IN Media Objectivity
Our privacy policy