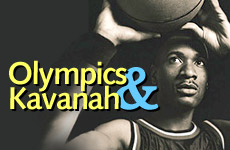 Eons before anybody ever heard of Marion Jones or Tiger Woods, Judaism recognized the importance of mental focus. In the case of Judaism, however, the stakes are weightier than any gold medal.

Ever wonder how those Olympians performed their feats of athletic mastery in Sydney?

For many of them, it's literally a case of mind over matter. Sure, they need the physical prowess. But there's more to it than that. The winning edge, it turns out, is also the result of intense and intricate mental preparation.

As outlined most recently in a story in Newsweek magazine, elite athletes everywhere spend countless hours training themselves to achieve success by actually visualizing it. Whether it's a professional golfer "seeing" the imaginary putt navigate a tricky green and then drop into the cup, or a pole vaulter "sprinting" down the virtual ramp and then clearing the bar at record-setting height, the best athletes are able to block out all distractions and mentally experience top performance -- and then translate that image into reality. In short, their success can be traced, in part, to their ability to focus on what is really important.

Eons before anybody ever heard of Marion Jones or Tiger Woods, Judaism recognized the importance of mental focus. In the case of Judaism, however, the stakes are weightier than any gold medal. What's involved Jewishly is nothing less than the establishment of a meaningful existence.

Kavanah -- which has been translated variously as focus, concentration, devotion and intention -- is the means by which we cultivate an intimate relationship with God in our lives in general and more specifically through the performance of His commandments and the heartfelt recitation of prayer.

Kavanah helps Jews establish their priorities. It helps us focus on what is really important.

Kavanah, in short, helps Jews establish their priorities. It helps us focus on what is really important -- in addition, of course, to the proper technique for heaving a javelin 100 yards.

What is important? The knowledge that God is out there and in here, that He is watching over us, and wants us to do His will.

There's a story that illustrates the importance of recognizing those essentials. It involves a man known as the Chofetz Chaim, a 19th and early 20th Century rabbi in Eastern Europe who was renowned for his scholarship, piety and modesty. He had a firm grasp of the essentials.

When they had gotten a safe distance away, the wagon driver turned to the Chofetz Chaim and asked, "Who was it that saw me?" The Chofetz Chaim gestured upwards and said, "He sees everything."

Indeed He does. But it often takes a special person to recognize that fact with crystal clarity -- what with the background noise of life intruding. Judaism acknowledges this difficulty, and offers a variety of methods and images to help us visualize God and connect with Him.

On one hand, although God has no physical form, our texts often depict Him, metaphorically, in guises that are familiar to us and that evoke feelings of warmth, awe or security. King. Father. Shepherd. On Rosh Hashanah and Yom Kippur, for example, there's the famous Unesaneh Tokef prayer in which we see ourselves as sheep passing single file in judgment beneath God's holy staff.

If you were standing in front of a flesh-and-blood king, you’d no doubt choose and present your words very carefully.

The Shulchan Aruch, the standard code of Jewish law, has another approach to nurturing kavanah. It presents a brief "training regimen" whose goal is to help us connect with God's worldly manifestation, known as the Shechinah, and articulate our deepest thoughts during prayer. It instructs worshippers to imagine that they are standing before a flesh-and-blood king. Someone in that position would no doubt choose and present his or her words carefully. Right?

"All the more so when he is standing before the King of Kings, blessed be He, who searches our innermost thoughts," says the Shulchan Aruch (Orach Chayim 98:1), which goes on to explain that Jews throughout the ages have actually engaged in extensive private meditation before prayer in order to get into the proper frame of mind to approach God. Some have been able to "transcend their physical being and strengthen the power of their intellect so as to attain a level close to prophecy."

Obviously, not everyone is expected to reach that level, and few do. But the rest of us might profit from some practical tips aimed at fostering kavanah that Rabbi Adin Steinsaltz has included in his new book, "A Guide To Jewish Prayer" (Schocken Books).

He suggests, first of all, creating an environment in which talking and other disturbances during public prayer are discouraged. On a personal level, Steinsaltz writes, kavanah can be encouraged by the "simple awareness that entering into prayer is, in fact, stepping into another kind of reality" that is radically different from the mundane routine of everyday life. Our Sages, he points out, felt this was akin to the creation of a "Shabbat," or sacred oasis, within each day.

And if all else fails, remember the simple but powerful words of the Talmud (Berachos 5b): One who gives much and one who gives little are viewed the same by God "provided he directs his heart to heaven." In sports, winning is everything. But in Judaism, trying your very best can also get you to the medal stand.

Tumors are Miracles Too

Seizing Change
The Promise Of The Land
Which Chat Are You On?: Parshas Behar/Lag Ba’Omer
Do You Like Slow-Cooked Food? Thank the Jews
Comments
MOST POPULAR IN Spirituality
Our privacy policy