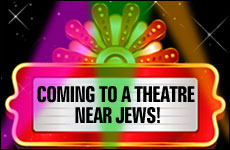 Jewish Film Festivals are growing in popularity. Watch local listings for the best cinema of 5769.

Star Shrek 3 -- Hideous but kind-hearted Jewish space ogre and lovely Earth-maidele meet when he beams down from his starship on a fact-finding mission. After beholding the enormous Star of David beneath his spandex uniform, she accepts his proposal and joins him beneath the intergalactic chuppah, to boldly going where no man has gone before.

Planes, Trains and Shidduchim -- All Tamara wants to do is get to her niece's bat mitzvah party in Long Island, but a well-intentioned bubbe named Sylvia whom she meets on the plane, insists Tamara take a detour meet her grandson Wacky situations ensue when Sylvia's grandson Herman declares that Tamara is his "basherte."

Jewrassic Park -- An innocent outing to the New York Jewish museum takes a terrifying turn when a 19th century Jewish family from Poland steps out from their photograph and relentlessly implores museum visitors to have a nosh and stay for Shabbos. "What, are you in such a hurry?" they ask.

An Inconvenient Truth -- Using a Powerpoint presentation, Al Gore traces the problem of melting polar icecaps to areas on Earth where cholent was left cooking for too long. In the process, he also discovers the beauty of Jewish wisdom, converts to Judaism, becomes a chassid and then sees his former running mate in a different light. "Who is he trying to kid? Lieberman's not so frum (religious)."

Changeling -- With increasing desperation, a small boy repeatedly tries to make change for his Hanukkah gelt at currency exchange after currency exchange across greater Los Angeles. But no one will accept his heart-wrenching plea to treat the chocolate coins as viable legal tender.

My Fair Zaidy: When the Karlinsy family moves Zaidy from Minsk to Iowa City, the neighbors are confused by his requests for a "glezzle tea" and call in noted linguist/anthropologist, Henny Higmans, to intercede when they see him trying to strangle himself with black leather straps attached to little black boxes in the living room.

Boychiks N the Hood: A close-knit gang of Brooklyn yeshiva boys resolve the tension in their lives as their paths diverge, with one becoming a commodities broker, another a podiatrist, one a Hollywood producer, and one a ballet dancer who won't perform on the Sabbath.

Nightmare on AOL Street: When Nancy Gutstein innocently tries to cancel her internet service, she descends into a horrific battle with a "customer service" representative who refuses to release her from her contract. After four straight days on the phone, she falls asleep and Elijah Krueger appears to her in a dream. He implores her to abandon her quixotic mission and go to shul -- OR ELSE!

Sects In the City -- Best friends, Lubavitcher Louis, Ashkenazi Avraham and Bobov
Bernie spend their days shopping for the perfect fedoras and black coats, while bemoaning the lack of single women in greater New York with good job prospects or chic clogs.

Scrap Iron Man -- Tony Shtarker goes valiantly from shtetl to shtetl, wrapped in the bright red hood of a compacted ‘68 Mustang. He saves his neighbors from Middle-Eastern terrorists in the spare time he can muster after a hard day of collecting old tin cans.

Mission: Impossible: Cunning AIPAC members infiltrate the Al Jazeera network and rig the stations to play the Chabad Telethon 24 hours a day -- except on Shabbos.

Yeshivah School Musical -- Tzuri, son of the esteemed Cantor Boltonovsky, is the star cantorial student at East Fairfax Yeshivah but he dreams only of Talmudic scholarship. Can Tzuri respectfully side-step his father's dreams and become a rebel Rebbe while his fellow yeshiva bochers dance a frenzied Hora and belt out the hit single, "We're All In Tzitzis Together?"

There Won't Be Blood -- A lonely and obsessive Texas trillionaire spends every cent of his fortune in a misbegotten and peculiar bid to take over all the Kosher slaughterhouses in the West. Is he a visionary or a megalomaniacal mashgiach?

The Other Boleyn Girl's Sister's Cousin -- During Purim, Skokie Illinois' best King Achashverosh impersonator becomes frustrated when he can't find his own, real-life Queen Esther. That is, until the local matchmaker promises to fix him up with a mysterious young lady from Passaic, New Jersey whose relationships to everyone's cousins, aunts and acquaintances are so tenuous that no one can recall how they actually know her...

No Country for Old Men -- Tom Belstein and Llewellyn Mosskowitz, a pair of retired Miami detectives travel to Japan, where they stumble upon a cache of stolen iPods, flat screen TVs, BlackBerries, Xboxes, digital camcorders and other newfangled, technological gizmos that they have no clue how to operate. But when Tom's pacemaker suddenly cuts out, his only chance at survival depends on whether Llewellyn can figure out how to program one of the stolen BlackBerries for the "pacemaker" setting.

Denise Koek is a happily married actress, writer and mom, who’s contributed to Ladies Home Journal, The Jewish Journal, The Signal newspaper, local magazines and anthologies and forced herself to watch zillions of movies to "research" this article... Judy Gruen's latest book is The Women's Daily Irony Supplement. Read more of her work on www.judygruen.comForeWord Magazine Book of the Year Award (GOLD!)Order today on Amazon.com Meet me on Facebook

An Ode to Omar Barghouti

Kiss Me, I'm Polish
It Takes A Lot Of Faith To Be An Atheist
How Instagram Brought Back This Nostalgic Soup
What Makes Eli Run?
Comments
MOST POPULAR IN Jewlarious
Our privacy policy