The Dating Guy: Popping the Question (2 of 3) 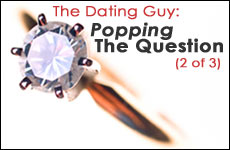 After searching for my soul mate for so long, there was only one thing that I could do when I found her: propose. Not as easy as it sounds.

I posed the following question to some single guys I've been friends with for years: What do you do when you find a girl who you share common goals and values with, who you're attracted to, have fun with, and have developed strong feelings for, perhaps even love?

One of the guys, who seemed representative of the group, was perplexed by the question. "What do you mean 'What do you do?' Keep dating her!"

Another friend who was a little bit more 'domesticated' replied, "Why not move in with her?" which was met with outright disapproval by some in the group.

One of the guys who seemed a little commitment-shy responded, "Break up with her immediately." His response was met by a round of applause.

My response was different. Being an observant Jew, there was at least one fundamental difference in my approach: I was dating to get married.

For years I was a man on a mission. I had literally traveled around the world and back on dating adventures, from Los Angeles to New York, Jerusalem to Basil. That's why, after searching for my bashert, my soul mate, for so long, I knew that there was only one thing that I could do when I found her: propose.

And I thought it would be easy too. How naive I was. Apparently, you can't just say to your girlfriend, "Hey, I like you a lot. Would you like to get married? Great. Now where can we get some pancakes around here - I'm starving."

Instead of scheduling a romantic evening with your partner and calling it, "proposal and pancakes," you have to buy her a ring. And one of those lollypop rings won't do. We're talking about a diamond ring here! So I began asking my friends if they knew a guy who knew a guy who has a cousin in diamonds, who of course had to take "cash." You don't expect me to go to buy retail do you?

After searching high and low, I found a guy with the stuff I needed. We scheduled the drop in a dark alley. I gave him the sack full of cash, and he gave me a stone (I would appreciate if someone with an MBA could explain to me why that transaction makes sense). And now that I had the ring, all I had to do was give it to Talia, right?

Wrong. Enough of my friends had gotten married that I knew that the first question that someone asks after he or she says, "Oh my goodness!!! I'm so excited for you guys!!! Mazal Tov!!!" is, "So how did he propose"? And your response cannot be something like, "Well, he took me out for pancakes, and the ring just plopped out when I poured myself some of my maple syrup." You have to have a story.

So I asked Talia if she wanted to come down to a particular cafe with me since my friend and his band would be performing. She agreed, and we made sure to get front row seats. The band was supposed to come on at 9:00 p.m., and although the patrons were filing in, my friend "Andy" was nowhere to be found. I told Talia to sit tight -- I was going to look for Andy.

I went into the office of the cafe, grabbed my guitar which had been strategically planted there earlier that afternoon, and walked on stage. I leaned towards the microphone and said, "How are you guys doing? My name is Richard, and I am going to sing you guys a song about my girlfriend Talia."

Now if I was a girl and my boyfriend did this, I think I would have seen the set up immediately. Not my Talia! She just smiled, and bopped to the beat of my song unknowingly, until the final verse when I sang:

Getting to know you has been so much fun,

And I've come to realize that you are the one.
For the last few months all I've heard is one thing,
"Richie when am I going to get my diamond ring?"
Talia Devora you mean so much to me
Talia Devora, will you marry me?

I got down on my knees and presented her the ring. She said yes, to both me and the ring, and I got back on stage to finish the song.

There is an unequaled excitement about calling up your mother, father, grandparent or friend to say, "I'm engaged." Talia would usually have some sort of cute preparatory remark like, "I hope you are sitting down because I have some news - we're engaged!"

I preferred what I call the "cardiac arrest approach" which was something like, "How's it going Dad? By the way, I'm engaged."

The excitement that Talia and I shared in announcing our engagement and celebrating with friends and family for the first month or so was probably the most memorable moment of my life (thus far). The remaining three months before the wedding definitely were not. (Yes you did read that right - four months in between engagement and wedding. We religious people don't like to waste any time.)

Planning for a wedding can be stressful. I never thought the question of whether I wanted white or purple lilacs at my wedding would turn into an existential question:

Talia: How could you like purple Lilacs instead of white ones? Purple represents struggle, while white represents purity.
Richard: I don't know. I guess I like the purple ones better.
Talia: So you want our marriage to be one of struggle rather than purity?
Richard: Aren't we talking about flowers here?

The wedding is a microcosm of your relationship, your upbringing, your family, and your connection with God. So planning all of the details of a wedding can get pretty heady and may even cause some fighting between the prospective bride and groom. I will be brave and admit something: there were times during our engagement period when I had second thoughts. I said to myself, "Does being married mean arguing about things like purple lilacs all day long? Is this a sign of things to come? If so, maybe it's just not for me." But after some thought and some mild sedatives, I remembered learning that marriage involves compromise, effort and dedication and these very things are what give marriage its meaning. After all, I wanted my life to be meaningful, not comfortable.

Getting engaged is a tough leap for a single guy to make; the conversation that I had with my single friends attests to that. The beauty of being single is that you answer to virtually no one. If you want to spend an entire Sunday sitting in front of the television in your underwear eating ice cream sandwiches, then no one can stop you (except the cable guy or the ice cream man I guess). But when you get married, Sundays are spent going to places like Ikea and Home Depot, not Ben and Jerry's. This can be a scary prospect, and some men are so paralyzed by the fear of what they are giving up, they fail to consider what they are getting in return.

For me, I was getting the other half of my soul, the person who was going to make me a better person and make me complete. The person who I share values and interests with. The person who I am going to raise a family with. I'll give up Ice Cream Sandwich and Underwear Sundays for that any day.

Stop Looking for Your Soul Mate

When In Doubt, Wait It Out
The Softball Player
How This 6 Generation Bread Baker Brought Back Israel’s Ancient Grains
Olivia Newton John’s Grandfather was a Nobel-Prize Winning Jewish Physicist
Comments
MOST POPULAR IN Dating
Our privacy policy
Aish.com Is Looking for Great Writers