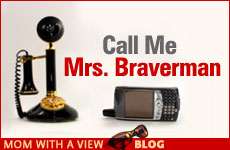 There's a lack of appropriate boundaries when 20-year-olds call 50-year-olds by their first names.

I called an office recently where a young girl I know worked as the receptionist. "Hey Emuna, how are you?" she asked. "Thanks, Emuna. I'll pass on the message."

Now, in today's world I applaud any attempt at good customer service and this young woman gets an A+ for friendliness. But this girl was in her early 20's, making her the age of my daughters (possibly even younger than some of them). Saying ‘I could be her mother' is not just a figure of speech.

So perhaps that explains why I found her use of my first name just a little too familiar. "You seem like a lovely person," I wanted to say, "but when did we become peers? Friends?"

Call me old-fashioned. When I was growing up all my parent's friends were Mr. and Mrs. -- and still are. Even if they would wish it otherwise.

I don't want to be a stickler about my honor. I don't think it's an ego thing. But I do think there's a lack of appropriate boundaries when 20-year-olds call 50-year-olds by their first names.

If she is on par with someone twice her age then she won't perceive how much more she has to learn and grow.

This leads to a diminishment of respect for history and those who came before us.

On a personal level, I found it jarring. I don't pretend to be younger than I am. I dress my age (completely avoiding Banana Republic) and try to act it.

I'm happy to play a maternal role in this girl's life. But a true friendship is out of the question. Too many years, too much history, a longer and broader life.

And she wasn't really asking for one. She doesn't really think we're buddies. She just hasn't had anyone teach her the importance of these distinctions. No one really taught her to respect her elders – and that this is partially created through a sense of distance.

Perhaps it's a legacy from the "don't-trust-anyone-over-30" sixties. Perhaps it's a result of parents who don't understand their own role vis-a-vis their children and therefore can't possibly communicate that other adults are not their children's friends.

I don't know the root. I only see the result in distorted relationships, arrogance and lack of appropriate boundaries.

We need to teach our children – of all ages – to speak to adults with respect – for our children's sake if not for the sake of the adults spoken to.

If we don't, we will all lose. I'm very uncomfortable calling this office where this young woman works yet I haven't yet found the polite and thoughtful way to say, "That's Mrs. Braverman to you."

Sometimes It Really Is Just a Phase

The Meaningful Job
Where Are We? The Body, Brain, Soul Problem
Dr. Sheila Nazarian’s Escape from Iran
The Miami Boys Choir is Taking over TikTok
Comments
MOST POPULAR IN Family
Our privacy policy
Aish.com Is Looking for Great Writers