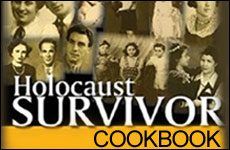 Recipes your family will enjoy, stories they will never forget

What started as a visit to her married children overseas turned into an accomplishment of a lifetime. Joanne Caras went with her son Jonathan and his wife Sarah to the Carmei Ha'Ir open restaurant in Jerusalem where they had volunteered for two years. So inspired was Joanne by the work to help the needy with dignity, that she immediately began thinking of ways to raise money for the charity. The idea of a cookbook turned into a Survivor's Cookbook when Sarah's grandmother, a Survivor, passed away. For the next three years, Joanne and her entire family worked tirelessly to collect recipes and stories from Holocaust Survivors.

"We asked Holocaust Survivors to send us their favorite recipe, photos, and also the story of how they were able to survive the Holocaust", Joanne says. "We collected 129 stories from all over the world, including Europe, South America, Australia, Canada, New Zealand, South Africa, Israel, and many US states. Each one is a miracle!"

"In the introduction to our cookbook we ask each person who cooks one of the recipes to also read to their family the story that comes with it. That way, not only will we preserve the recipes, but more importantly we will help to insure that the stories of these brave Survivors will live on for generations to come."

Cookbooks can be purchased at the retail price for personal use, or they can be purchased in large quantities at the wholesale price by groups who want to sell them to their members as a fundraiser.

Proceeds from every cookbook sold will benefit the Carmei Ha'ir Soup Kitchen in Jerusalem. Cookbooks can be purchased at the web site www.survivorcookbook.org.
To learn more about Carmei Ha'Ir's work please visit www.carmeihair.org.il

Excerpted from The Holocaust Survivor Cookbook.

I was born in Paris in 1939. My mother was Hungarian and my father was Polish. My parents owned a small jewelry store in Paris where friends and neighbors gathered for tea and conversation.

When the war broke out in France my father joined the French army in the foreign battalion. He was captured by the Nazis and taken to a prison camp in Germany, where was kept alive only because he was able to repair watches and clocks for the German soldiers.

Soon after I was born people began to come to the jewelry store warning that the Nazis were starting to round up Jews in Paris. My mother sent my older sister Rene to live in a convent. I was just a baby so my mother hid me in a country farmhouse outside of Paris until the war was over. Food was very scarce so we ate mostly what we could pick from the trees in the forest. By the time I was three I would go out in the forest and fill burlap bags with chestnuts, which my mother would roast or boil. When we could no longer find any chestnuts we brought home the only other thing we could find, large mushrooms. My mother was not sure if they were poisonous so she tried them before she let me eat any. Once they were proven to be safe they became a great source for stews and other recipes.

When the war ended, my mother and I returned to Paris and we were reunited with my sister. Since we had not heard from my father for a few years we assumed that he was dead. Then one day we were returning from the market when all of the neighbors shouted "There is a surprise for you in your house!" It was my father, whom I did not know, alive and well!

Today Arlette lives in Baltimore. She has five children, including Rabbi Hillel Baron, and more than 20 grandchildren.

Pour into a 9x13 pan sprayed with vegetable spray

"It doesn't have to be perfectly patted down!"

Spread one can of your choice fruit pie filling on top.

Add together in 4 quart pan with heavy bottom. Then add

Variation: add spices or other vegetables

Our father, Joseph Tauber met our mother Regina Zylberberg when she was about 14 years old. They were childhood sweethearts. They married in January 1940 right after Germany invaded Poland in Sept. 1939. Initially they were in the ghetto. In 1944, on a long, brutal walk to Tomashow, they were separated. Regina was sent to Auschwitz and Joseph was sent to Dachau. They endured unspeakable horrors. They lost most of their family members including their parents, most of their brothers and sisters and their baby, Hadassah Tauber who was only three years old. 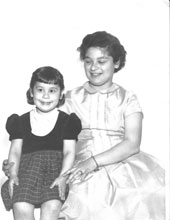 Miraculously, on July 13, 1945 Regina and Joseph found each other each again after they were liberated. In 1948, Regina gave birth to another daughter, Sara Rose in a Displaced Person's Camp in Stuttgart, Germany. They moved to America in 1949 and settled in Baltimore. They had another daughter, Esther Marlene in 1955. Joseph and Regina were always grateful to God for finding each other again and giving them other children. Regina was a nurturing person, and used love in all she did for others. Feeding her family with her delicious food was just one of her many expressions of love. 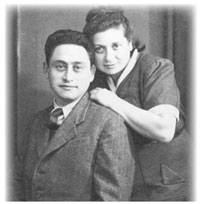 Our Bubby and Zayde were never bitter, because they were grateful to have found each other again and thankful to God for giving them their two daughters (our mothers). We learned from them the most important values of kindness and gratitude. We were so blessed to have them. We not only remember them when we eat her wonderful food, but their beautiful memories are always in our hearts. 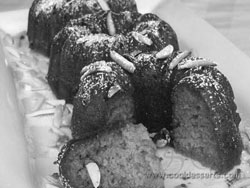 Instructions: Mix all the above ingredients. Bake at 350 for 1 hour.

Instructions : Boil and drain noodles. Combine rest of ingredients. Top with cinnamon, sugar and margarine. Bake at 450 for 15 minutes. Reduce to 350 for 30 minutes.

I am a first generation survivor. I was born in a small town called Szydlowiec, near Radom in Poland. My family consisted of my parents and six other siblings. The Nazis occupied our town in September, 1939. At that time I was 14 years old.

For three years, we continued to live in our house along with the other people in the town. A fence was not erected and a formal ghetto was not created because the entire Jewish population lived in the center of the town, and was surrounded by the Polish people and the Nazi SS.

We were forced to do various jobs and were fed miserable food rations. We were without any nutrition, calories, or vitamins. My father was a shoemaker and was able to stealthily barter shoes for food with the Polish people—and that's how we were somehow able to survive.

I had two older brothers, but since I was the oldest of the girls, it became my duty and obligation to do all of the chores in the house, while I was also forced to work for the Nazis. 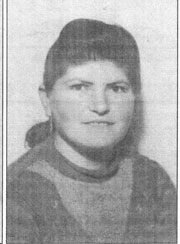 In 1942, the Nazi's suddenly gathered the entire Jewish population and segregated us according to our ages and apparent health condition. My parents, grandparents, and younger sisters and brother were immediately sent to Treblinka, an extermination camp, where they perished. My two older brothers escaped but were later caught and shot.

My younger sister and I were sent to an ammunitions factory where we worked for two years producing shells for bullets. We worked in two shifts, 12 hours each, night and day—and all that was provided was a measly piece of ersatz bread and a bowl of watery soup. All day and night we would dream of food. We would remind ourselves of the simplest things that we ate at home, especially during the holidays. I would think about how I helped my mother prepare the necessary dishes such as gefillte fish, chicken with matzo ball soup, kreplach, stuffed cabbage, and a chulent for shabbat.

As the Russian army got closer and closer, the SS and their collaborators started to transport us from one camp to another—each one worse than the next. At one point we walked dozens of kilometers during the middle of winter in torn or wooden shoes, without any food. We were transported to Bergen Belsen, Burgau, Tirkheim, and we ended up in Dachau where on April 30th we were finally liberated by the American army. Miraculously, I remained with my sister the entire time. 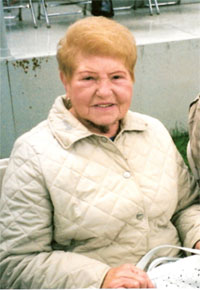 After the liberation, we lived in a displaced person's camp for four years. After six weeks at the camp, I met my husband Harry. We got married in Germany and immigrated to the United States. We moved to the Bronx because I had an uncle who sponsored us and his family was living there. I was in the United States for only ten days when I got a job as a seamstress. A couple of years later I gave birth to the first of two lovely daughters. I have two daughters Helen and Susan. They are married. The first has two daughters and the second has two sons. We lived in New York for many years (Brooklyn, Long Island, and Queens), and had various businesses. We eventually settled in Florida and recently celebrated our 60th wedding anniversary!

2.Slice the celery and carrots into small pieces.

3.Place beef, onions and celery into a pot. Add salt and pepper and bring to a boil. Let simmer until meat becomes soft.

4.Dice potatoes and add to pot.

6.When all ingredients are soft add peas.

7.Add salt and pepper to taste.

1.Boil the eggs until they are hard-boiled.

2.Cut the mushrooms and onions into tiny pieces.

3.Fry the onions in some oil and salt until they are light brown.

5.Chop the hard boiled eggs (use as many yolks as desired)-4-6 is preferable.

6.Mix all of the ingredients together, add salt or oil to taste.

Click here to purchase a copy of The Holocaust Survivor Cookbook

Chicken Soup for Your Health