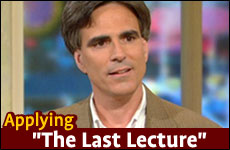 If you had one last lecture to give before you died, what would it be?

It became an internet sensation. Millions of people watched it online and millions more probably will.

"The Last Lecture," by Professor Randy Pausch is a very special class given by a very special person. On Sept. 18, 2007, Dr. Randy Pausch gave his final lecture at Carnegie Mellon University in Pittsburgh. The lecture was part of a series given by professors, each conveying his thoughts as to what he would tell his students if he was giving one last lecture before he died. Only for Randy Pausch, it really was the last lecture he would give as a professor before he died.

Randy was diagnosed with pancreatic cancer and had but a few more months to live. He died on July 25, 2008.

Randy discusses great wisdom in this lecture. He deals amazingly with his predicament saying, "We cannot change the cards we are dealt, we can only change how we play the hand. If I don't seem as morose as you think I should be, I'm sorry to disappoint you. . . . I'm dying and I'm having fun because there's no other good way to play the game."

"Brick walls are there so that we can prove how badly we want something."

Randy encourages us to have dreams and goals in life and to work toward achieving them, never losing our childlike wonder. We will not regret the things we did on our death bed but we will regret what we didn't do but wanted to do. Along the way we should also enable the dreams of others which he says can be even more fun than achieving our own dreams.

What should be our reaction when we face obstacles in the path of our dreams? Randy tells us, "Brick walls are there so that we can prove how badly we want something." We must prepare and work hard in life because there is no such thing as merely having ‘good luck.' "Luck is when preparation meets opportunity."

There have been many lectures that contain great wisdom. What's the fascination with this one? Why is it so popular that it was made into a best-selling book?

Part of it is our admiration for Randy's personality and outlook. Here is a person facing death with courage, humor, optimism, and focus.

We don't like to face the reality that we will all die someday. Facing death is frightful not only because we are forced to give up all the wondrous things that this world has to offer, but in death, we confront the fear of the unknown. So we spend our lives pretending as if we will live forever. Who wants to deal with their eventual demise?

Judaism has a different perspective on death. The Torah actually states that death is a good thing:
"God saw all that He created and behold, it was very good." (Genesis 1:31)

Why is death associated with something good?

Ethics of the Fathers does not say where you will be going in the future, but where you are already going. From the time we are born, we begin a journey whose destination is our eventual death and entry into the afterlife. That's why we must make the most out of every single day of our lives.

As the Talmud states:

Rabbi Eliezer said: Repent one day before your death. His students asked him, 'Does a person know when his day of death will occur?' He answered them, 'Then he should repent today, perhaps he will die tomorrow! Thus, all his days will be full of repentance!

This is what King Solomon said in Kohelet (9:8): 'Your clothing should be white at all times.'... There is an allegory which illustrates this. A king invited his servants to a grand feast but did not inform them when the feast was to transpire. The smart ones dressed in their finest clothes and prepared themselves by waiting outside the palace's entrance. The foolish ones remained in their common clothes and continued to engage in their own pursuits, thinking they had plenty of time. Suddenly, the king asked for all to attend, and only the smart ones were asked to sit, eat, drink, and enjoy." (Paraphrased from Talmud, Shabbat 153a)

Life is one long preparation for a big feast with the Master of the World. We could be called to attend this feast at any time; none of us know our day of death. If we are one of the smart ones, we will live each day in preparation, urgently, intensely and purposefully.

Randy Pausch said that while he did not want to die as young as he did, he was grateful for the fact that he received a warning. Similarly, Jacob, our Patriarch, prayed to God that he should become sick before he dies so that he would have the opportunity to close off various things that he wanted to complete in his life.

If we were given an infinite amount of time in this world, most of us would never be driven to attain anything.

Death is good because it puts a limit on the number of days we have to accomplish our goals. If we were given an infinite amount of time in this world, most of us would never be driven to attain anything. We would always feel that we have so much more time to complete our tasks. Knowing that our days are numbered, we are motivated to strive for greatness.

This is what is meant by a Talmudic statement that has perplexed many throughout the ages: "Whoever wants to live, must make himself dead" (Tamid 32a). If we learn how to die, then we learn how to live. By living each day as if it could be our last, we relate to each life experience passionately, powerfully, and memorably.

Randy's legacy within the "Last Lecture" was not what one might think. Despite the lecture's popularity, Randy says he really only intended his words for his three small children. "I think it's great that so many people have benefited from this lecture, but the truth of the matter is that I didn't really even give it to the 400 people at Carnegie Mellon who came. I only wrote this lecture for three people, and when they're older, they'll watch it," he says.
So if you had one last lecture to give before you died, what would it be?

Princess Zelda and Queen Esther: How the Legend of Zelda Helped Me Understand Purim
Lessons from the Book of Jonah
Where Are We? The Body, Brain, Soul Problem
Dr. Sheila Nazarian’s Escape from Iran
Comments
MOST POPULAR IN Spirituality
Our privacy policy
Aish.com Is Looking for Great Writers