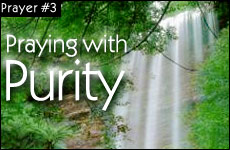 Purity has the power to transform prayer into a focused, uplifting experience. Here are a few simple tools.

The concept of purity is not only for the devoutly righteous and Ivory soap. Understanding what purity means will help enhance your praying ability and experience.

When it comes to prayer, purity means a few things. First and foremost it means complete concentration on the prayer, and, more importantly, to WHOM the prayer is addressed. The heart is capable of feeling more than one thing, but not all at the same time. A divided heart means divided concentration, and it is the quality of concentration that dictates how much we are "there" for what we are doing.

Memory seems to work this way. If what we are experiencing is exciting and stimulating, it will draw us in, make it easy for us to focus on what we are doing, and, unify us with the experience. The more our heart and mind are involved in what we are presently doing, the more what we are doing will leave an impression on us and the better we will remember it.

The heart and mind are so powerful that they can create a world that ignores the existing state of reality.

In fact, the heart and mind are so powerful that they can create a world in our mind that ignores the existing state of reality that encompasses us, even stimulating emotions and feelings. For example, someone sitting in a dentist's chair can intellectually and emotionally transport himself to more pleasant surroundings simply by concentrating on a more pleasant experience.

A Letter from God

So You Don't Feel God in Your Life?

Prayer #5 - Prayer Role Models
G-d Time
Shavuot is The Holiday of Cheesecake and Blintzes
What Does Kosher Mean Literally?
Comments
MOST POPULAR IN Spirituality
Our privacy policy