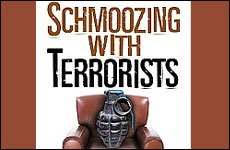 From Hollywood to the Holy Land, Jihadists reveal their global plans to a Jew.

The people who kill Jews and other westerners for a living would
seem to be a bit hard for nice Jewish boy to sit down and chat
with about why they do what they do. But in Schmoozing with
Terrorists, Aaron Klein -- Jerusalem bureau chief for World Net
Daily -- shares the wide-ranging conversations he has had with
many of the top Arab Palestinian terrorist leaders in Israel
about exactly that topic.

Klein's conversations covered the gamut from why Hamas, Islamic
Jihad, and Fatah's al-Aqsa Martyrs Brigades endorse the use of
homicide bombing in light of the Koranic ban on suicide; to the
way in which the terrorist leaders nakedly reject documented
archeological and historical connections between Jews and Israel;
to the ongoing persecution of Christians by Muslims in Bethlehem,
Gaza and other cities.

Klein's style is conversational and personal: he never hides his
own perspective or the fact that he is an Orthodox Jew. And yet those whom he interviews, although occasionally bridling at some of Klein's questions, are perfectly
comfortable meeting with him and articulating their views and
goals.

The Arab Palestinian leaders with whom Klein spoke are very
candid about their dreams not only to wipe out Israel, but to
establish a worldwide caliphate.

The Arab Palestinian leaders with whom Klein spoke are very
candid about their dreams not only to wipe out Israel, but to
establish a worldwide caliphate. Their plans for American
society should awaken anyone who thinks the Arab terrorists are
only Israel's problem. And it should also smack awake all the
moral relativists who equate Israel's security measures with
hegemonic brutality.

A deputy commander of Fatah's al Aqsa Martyrs Bridade, Nasser Abu
Azziz, explained to Klein that when sharia law is imposed in
Western countries, "these sick people [homosexuals] will be
treated in a very tough way," explaining that the Islamic
leadership will "prevent social and physical diseases like
homosexuality." All the terrorists whom Klein interviewed agreed
that homosexuality would not be tolerated in the US once Islam
rules.

And homosexuality is not all they condemn. The failure of
western women to conform to Islamic standards of dress will reap
harsh responses including, if necessary, torture. Sheik Hamad, a
Hamas cleric, said those women who refuse to cover themselves in
conformity with Islamic values would be punished either by
imprisonment, whipping or stoning. And we aren't just talking
about Madonna's bustiers: under the standard described by
Klein's interviewees, even Supreme Court Justice Ruth Bader
Ginsburg -- who does in fact wear a robe -- would be a target for
stoning. She's omitted the head covering.

Given the opportunity to explain the source of Arab Palestinian
terrorism, Klein's subjects contradict standard lore. Klein was
told by Abu Ayman, the commander of Islamic Jihad in Jenin, that
Muslims are strictly forbidden from becoming suicide bombers if
they are motivated by anything -- including desperate poverty or
revenge for Israeli wrongdoing to this individual -- other than
love of Allah. When Klein pointed out to a young man in training
to become a "martyr" CNN's claim that suicide bombing was
motivated by poverty and despair, Abu Ahmed was visibly affronted
and called it "Israeli propaganda."

The most bizarre and brazen interview Klein describes is with
Sheikh Taysir Tamimi, the chief Palestinian Justice and one of
the most important clerics in the Middle East. Tamimi lectured
Klein that "there is no Jewish historic connection whatsoever to
the Temple Mount or Jerusalem," and that the "Jews came to the
[Temple area] in 1967 and not before."

Tamimi responded to Klein's recitation of archeological findings
and historical connections: "These archeological things you cite
are lies." Tamimi simply erases Judaism's connection to the Holy
Land by ignoring irrefutable and concrete evidence of
inconvenient facts. Such distortions are particularly troubling
because Tamimi is an enormously influential Imam whose view of
history is eagerly imbibed by his followers. Echoing Tamimi is
Nasser Abu Aziz whose rhetoric, while perhaps inelegant, was
crystal clear: "We are fed up with this crap nonsense of the
Temple Mount."

Klein's interviews show that Palestinian leaders have also, and
repeatedly, perpetrated a vile hoax on their acolytes. The myth
of the seventy-two virgins in paradise who await each martyr is a
theme echoed and believed by those who extol and consider suicide
bombing an option. Klein's subjects do not explain how the
appetite for virgins fits with the love of Allah as an incentive
for becoming a suicide bomber.

When asked about the source for the promise of the 72 virgins, Ala Senakhreh, West Bank chief of Fatah's Martyrs
Brigade, insisted such a promise was made in the Koran. When
pressed about where exactly that promise could be located,
neither Senakhreh nor any of his dozen henchmen clerics present
could find such a passage. After much anxious searching, the
Sheik became increasing hostile and Klein quickly left. He had
apparently discovered the point at which the terrorists'
hospitality collided with their refusal to be questioned closely
about their ideological weapons.

I worry that this enlightening and highly readable book may not
reach as many readers as it should because its name and title
undercut its serious subject. The word "schmoozing" is known by
and appeals to a rather limited audience. The cover picture
shows a large grenade seated on a leather armchair. Perhaps the
picture is easy shorthand for what he did, but there is something
lighthearted about it that undercuts the gravity of Klein's book.

Nonetheless, and in addition to the glimpses Klein provides, at
least two overarching questions are raised by this book.

are the rest of the journalists who call Israel their
beat unable to obtain the same information?

First, Aaron Klein, a product of Philadelphia suburban Jewish
religious schools, moved to Israel and within a few years was
able to gain audiences -- as an identified Jew and a journalist
-- with the most senior Arab Palestinian terrorists, who spoke to
him frankly about their plans and their views. This forces us to
ask: where is the rest of the press corps? If these murder
merchants happily speak at length about their desire to murder
and torture those who don't fit their religious profiles, why are
the rest of the hundreds of journalists who call Israel their
beat unable to obtain the same information? Do they prefer to
stick with the standard mendacious narrative, either because they
believe it or because they are too afraid to approach the
terrorist leadership? Neither answer says anything favorable
about the press corps.

Second, why are all those on the political left, those who
identify themselves as advocates for minorities, so convinced
that Israel is the villain and the Arab Palestinians are the
victim? Anyone who claims to favor women's rights, gay rights,
ideological tolerance, freedom of the press, of speech, of
association, of religion, in fact, nearly all of the icons of the
political left, should logically support the Israeli narrative.
Instead, most of those in this country who fit the profile of the
left support the Arab Palestinian narrative. Yet Klein's
interviewees freely articulate their categorical rejection of the
ideas these groups hold dear. And when these people
categorically reject an idea, we're not talking polite
disagreement over cocktails: we're talking beheading in the town
square, as Klein's interviewees state in plain English. Yet
these groups -- QUIT (Queers Undermining Israeli Terror) is my
own personal favorite -- continue to support terrorists who would
happily slaughter their western advocates if they attained the
power they seek.

While Klein's book doesn't answer these questions, it provides
the necessary proof that willful ignorance and cowardice play a
strong role in the current widespread distribution of sympathy
for the Arab Palestinian narrative.

Click here to purchase a copy of Schmoozing with Terrorists.

This article originally appeared in the American Thinker.

Lori Lowenthal Marcus is a journalist who focuses on the Middle East.

Israel, Sudan and Me

Israel's Ethical Defense
The Blue Beyond
Great Place to Live
Is Eating Supposed To Be Spiritual?
Comments
MOST POPULAR IN Israel
Our privacy policy