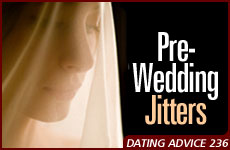 With two weeks to go, she's still wondering, "Is this the one?"

My wedding date is getting closer and closer. I am what you might consider to be an older single, and I have been waiting for this my entire life. However, instead of being excited I am at times numb, anxious, and nervous. I am beginning to focus on my fiance's flaws and not the positive traits that attracted him to me. Then I keep wondering, "Is this the one?"

Everyone tells me that it's normal to be scared. However, I see brides who are overcome with joy and ease. I am not that person. My fear resonates with doubts about what I am doing.

To focus on the positive side, I do care for the man I am engaged to, and when we are together, we become very connected.

How do I know that this is the right thing and I am just afraid? Or maybe we do not have that special something to be married? The wedding is scheduled in two weeks. Any advice would be appreciated -- quick!

Pre-wedding jitters are one of society's best-kept secrets; no one lets engaged people know that they may experience feelings of panic, soul-searching, doubt, ambivalence, and even anguish, and that this is perfectly normal. These feelings are especially common among "older" singles, who have an amount of life experience under their belt before they decide to marry.

It's important for you and anyone else who experiences these "pre-wedding jitters" to understand that these feelings, their intensity, and even their frequency have nothing to do with the quality of your relationship with your future spouse and your ability to have a happy and enduring marriage.

These bouts of anxiety are often accompanied by an assortment of other feelings. One of the most common is focusing on some of the other person's habits or character traits that were never a real issue in the past. Suddenly, they become magnified. "I never realized how shrill her voice was before... how large his nose was... how intense he gets at times... that her laugh is really irritating. I don't think I can take it!" The person may also at times experience physical symptoms that mimic a panic attack. In truth, the voice/nose/intensity/laugh are not the issue. They've just become a way the person binds the anxiety he or she is experiencing, by unconsciously focusing on something that is close to the surface.

Frankly, these anxious feelings shouldn't surprise anyone. The period of engagement is a stressful time, even though the engaged couple are confident they've chosen the right partners. There's a wedding to plan -- arranging for a caterer, hall, band, invitations, florist, photographer, videographer, officiating rabbi, guest lists, invitations, travel arrangements, etc. On top of all this are the logistics of where to live, how to furnish your new home, and whether either of you will be relocating and/or changing jobs. Each of these can be stressful, and the combination of stressors creates feelings of anxiety even for people who ordinarily deal well with pressure-filled situations.

The problem, as we mentioned, is that people often wonder why they seem to be the only bride or groom who feels this way. They think that everyone else is flying through their engagements on a cloud. We promise you that they aren't. While some people feel tranquil in the weeks leading up to their weddings, many engaged people experience jitters and simply hide these feelings from everyone -- even their closest friends and relatives. And they secretly think, "Is something wrong with me? Aren't I supposed to be happy all the time?"

Once a nervous bride or groom understands that it is normal to feel anxious, and that these feelings are not a "sign" that something is wrong, they begin to lessen their anxiety. One way is to ask themselves what's really troubling them. Perhaps they're becoming overwhelmed by the details of planning the wedding or setting up a new home. If that's the issue, it would be a good idea (if you haven't done so already) to delegate some of the work to friends or family members who've offered to help.

Some people wonder about being able to get along with their future in-laws, or worry about the way they and their future spouse have been resolving disagreements. They may need reassurance that most engaged couples deal with issues like these, and that there are many successful ways to do so. Others may have trouble pinpointing their concerns, because they may be the type of person who worries about uncertainty. They can figure out a strategy that can help them worry less, such as distracting themselves with an activity they enjoy, or forcing themselves to substitute comforting thoughts for the anxious ones.

There's also an exercise that can help people with "cold feet" reassure themselves that they are in fact marrying the right person. It's the same exercise that we suggest to people who are trying to decide whether or not to get engaged. You can ask yourself the following questions:

Also, ask if you have developed the following important qualities in your relationship:

People who answer "yes" to each of these questions can be reassured that they have chosen the right person to marry and that their relationship has a strong foundation to build upon after marriage. Many people tell us that this exercise -- plus some of the coping ideas we've suggested -- help them look forward to their ultimate goal of marriage during their bouts of pre-wedding jitters.

Many people find it helpful to enlist a trusted, happily married friend or relative "hold their hand" and provide ongoing emotional support during their engagement. In fact, in Jewish tradition the bride and groom are each accompanied by a friend who acts as their "shomer" (guardian) for 24 hours prior to the wedding, and one of his or her roles is to provide emotional support.

Much of this advice can be found in our book called In The Beginning -- How to Survive Your Engagement and Build a Great Marriage (Targum.com). Our book also addresses another scenario that bears mentioning. Some people experience second thoughts because there is a serious problem in their relationship. Although your letter was a short one and only gave us a limited amount of information, we got the sense that you did not have second thoughts about the man you are about to marry.

However, for the sake of some of our readers, we'd like to briefly discuss what happens when someone suspects that they have made the wrong choice in a future life partner. Sometimes, they realize that one of them has changed goals during the engagement, and their views of the future may no longer be compatible. There are times that a dater ignores red flags about the other person during the courtship, and finally has the courage to acknowledge them as the wedding date nears. Or, a person can reveal a character trait during engagement -- such as controlling tendencies, a difficult temper, or a tendency to acquiesce to a parent's unreasonable demands -- that wasn't apparent while the couple was dating. Furthermore, someone who felt pressured into becoming engaged may review the exercise we described earlier in this column and realize, "I can't answer ‘yes' to most of those questions. I don't think this is the right person for me."

All of these concerns are legitimate ones that can't be dismissed with the adage, "Oh, it's just cold feet," or, "At your age, this may be your last chance." The engaged person needs to acknowledge what is truly bothering them. Then, they must decide if there is a way they can come to terms with the issue, and whether they and their fiance can resolve it in a favorable way. If they can't, their wisest course of action is not to marry someone who is wrong for them.

We usually recommend that when someone has these concerns, the couple talk about these issues together to see if they can -- or can't -- resolve them. It's also a good idea to seek advice from a knowledgeable, trusted person who is experienced in dealing with relationships, such as a rabbi who has successfully worked with couples in the past, a wise friend or relative, or a marriage counselor or therapist. The advisor should be a person who will really listen to the engaged person's concerns and help think things through.

In addition, we believe that the advisor should refuse to decide whether or not the wedding will take place. It is the engaged person, and only the engaged person, who can make the ultimate decision whether to continue with the planned marriage or to end the engagement.

So, while this last piece of advice doesn't apply to you, we wanted to include it in our column. We hope that your wedding is a joyous one, and that most, if not all, of your pre-wedding anxiety will be gone once you are married. Mazel tov!

Dating Advice #215 - The Pre-Nuptial Pact
Why Are The Prayers Of Yom Kipur So Repetetive?
Ha'azinu 5783: A Time for Unity!
Twisted Thinking
Comments