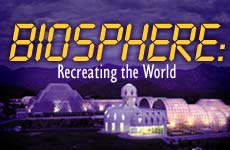 Biosphere was meant to figuratively take control of the Universe from God. Apparently God had other plans.

Our 15-seat barge-on-wheels Chevy van cruised down the Arizona highway, Saguaro cacti flying by outside. Inside were three generations of our family, including eight children nine years and under, assembled from Israel and the US for a family vacation.

The effort put into Biosphere was impressive. Years of planning and testing were spent trying to get the erector-set-like frame to be airtight, sealing in people, animals, computers, and agriculture, all working in harmony. The structure, set on over three acres, has 6,600 glass panes held to the space-frame by 50 miles of glazing. It sits on a 500-ton stainless steel liner with 12 miles of welding. Inside are rainforest, marsh, ocean, savanna, desert, and agricultural regions -- all computer-controlled for temperature and humidity.

While an impressive attempt, Biosphere fell far short of a self-sustained environment. The crew brought months of food with them to begin the experiment; various necessities were brought in during the "self-contained" experiment as needed, including horticultural oil to stop mites from destroying all their crops; and finally the electricity to power the entire system (hair dryers and all) was bought from the local coal-burning utility.

Biosphere quickly became a desperate exercise in fighting off starvation.

Throughout the experiment, oxygen levels steadily dropped, until the members barely were able to maintain consciousness. The rules of self-sufficiency were changed yet again as oxygen was pumped in to prevent brain damage. In the meantime, all the pollinators died, so that none of the plants could reproduce. Finally, all the birds and animals brought in for food also died.

For the humans, Biosphere quickly became a desperate exercise in fighting off starvation. The eight members, split into two factions of four -- which to this day do not talk to each other -- were reduced to hording and counting peanuts. Biosphere ended as an almost comical failure.

An introductory movie on the site explained that Biosphere was meant to figuratively take control of the Universe from God. Apparently God had other plans. As an old Yiddish expression goes, "Man plans and God laughs."

By the end of the experiment, scientists concluded, "No one yet knows how to engineer systems that provide humans with the life-supporting services that natural ecosystems (read God) produce for free" (J. Cohen and D. Tilman, "Biosphere 2 and Biodiversity: The Lessons So Far," Science, November 15, 1996).

As we pulled out of Biosphere's parking lot, the conversation turned to the meaning of it all. The Biosphere experiment should fill one with awe at the balance that is God's Universe.

After all, if the cream of highly developed scientific minds with hundreds of man-years of planning and hundreds of millions of dollars of funding were unable to create an ark for two years, how much more does Biosphere 1 (Earth) require a super-intelligent and loving creator to come into -- and remain -- in existence.

Just as Noah's Ark transported mankind to a better appreciation of each other and God, so too can Biosphere's failure transport us to a profound appreciation of God's world, and how we must relate to each other within it. In demonstrating the incredible intricacy and balance of the Universe, ironically, the largely irreligious scientific community is indicating the existence of a creator and constant re-creation of our world.

Or as one of our small children intuited after our Biosphere tour, "That was a good way to prove HaShem (God), huh?"

Biosphere parallels our secret goal -- to be independent.

But for many of us, Biosphere parallels our secret goal -- to be independent. On a certain level we all want to be self-sufficient -- move away from our family and community, go to college, get a job, make money. Many people are even convinced that they do not need a spouse or God. They are self-sufficient; they are adults.

But is it bad to need others? Would anyone want a spouse that had no need for him or her? We all want our children to be self-sufficient, but then we wonder why they don't call!

We just completed celebrating Rosh Hashana, the birthday of mankind. On the Sixth Day of Creation, the first of Tishrei, Adam and Eve were created. Every year the cycle repeats itself and God recreates mankind anew. Every year we must stand and re-earn our right to exist.

Rather than feigning independence, let this be the year that we, the Jewish people, stand together, supporting each other and being that much stronger.

A Doctor’s Diary: A Peek behind Aging and Death

The Song of the Fish

Egyptology in the Torah: Biblical Archeology
The Connection between Israel and the Jewish People
Grit and Torah
Why We Can’t See True Reality
Comments
MOST POPULAR IN Current Issues
Our privacy policy