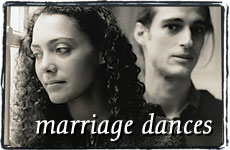 A common marriage dance is a two-step called "attack-withdrawal." One wants expressions of love and asks for it the wrong way; the other feels threatened and retreats.

There are many hurdles along the road to marital bliss, even for those of us who accept the need for (lots of) effort.

A common marriage dance -- one not conducive to the success of the marriage -- could be called the "attack-withdrawal" game. The women [typically] want love and affirmation but don't know how to express that desire in a positive way. The men [typically] feel threatened and retreat. The women push more. The men retreat more. The women feel hurt and attack. The men retreat more -- and complain to their friends and rabbis! The negativity deepens as the pattern becomes entrenched.

The following are two variations of this dance.

Couple #1: Sally and Michael are involved in a common unproductive dance. Sally cares very deeply about Michael. But she wants frequent affirmation of Michael's love and commitment. Michael is less expressive emotionally. He cares deeply about Sally but he's preoccupied with work and other concerns. He doesn't call as often as Sally would like. He doesn't tell her his innermost feelings (especially the ones about her). Sally responds by attacking Michael. Michael, confused by the onslaught, withdraws. This frustrates Sally even more. She escalates her criticisms. He withdraws even further. And a negative pattern has formed.

Couple #2: Carol and Tom do their own variation of this dance. Tom doesn't satisfy Carol's emotional needs. He doesn't give her the love she craves, in the way she craves it. They have very little time together. Carol looks for another way to fill the emptiness. She goes shopping. She shops and she shops and she shops. And Tom sees the bills. And he gets angry and pulls away more. And Carol feels lonelier and emptier. And she shops some more. They're stuck, quite unintentionally, on a destructive path.

CAN THIS MARRIAGE BE SAVED?

Can these couples slowly find their way back to the center? Can they recapture the caring? Can they deepen the commitment? Can they release the joy and pleasure available?

They can. They will. But it requires hard work and practical steps. It requires honesty and self-awareness. These latter two are not so easy, because we are all afraid of being too honest, it makes us vulnerable and we can be hurt.

But aren't we hurt anyway? If we don't allow ourselves to be vulnerable we can never create the close bond inherent in a lasting marriage. It's a risk worth taking if we truly want to grow.

Let's go back to Couple #1, Sally and Michael. Sally needs to be explicit: "Michael, it would be so helpful and nurturing to me if you would call more often, if you could express affection more frequently." Michael needs to respond, "It's hard for me. I come from a family where emotions were repressed. But I'll try." And Sally should appreciate each little step, and express that appreciation.

Maimonides suggests, if we do external actions repeatedly, they will affect us internally as well.

Sometimes people complain, "It seems so fake. He's just doing it because he's supposed to. He doesn't really feel it." This is a mistaken and counterproductive way to think. First of all, he's doing it because he cares and he wants this marriage to succeed. Second of all, as Maimonides (one of the original behavioral therapists) suggests, if we do external actions repeatedly, they will affect us internally as well.

Through consistent, small steps, Sally and Michael can turn their marriage around. Maimonides states, "Man does not acquire virtues by the greatness of the deed but by the number of times it is performed." Keep this slogan in your wallet. Better small everyday acts of thoughtfulness and consideration than occasional grand gestures.

And Carol and Tom, Couple #2? What is Tom going to do about all those credit card bills? And the accompanying anger and frustration? Once again, we need to begin with an open discussion. How much time can Tom reasonably give Carol? How can they maximize their time together? Just seeing your mate's desire to please, their eagerness to reach a satisfying solution is a relief.

Rabbi Dessler gave this advice to newly married couples: "Take care, my dear ones, that you constantly strive to give pleasure and satisfy one another, as much as you feel on this day." Focus on giving to your spouse, on bringing them closer. A change in mental attitude leads to a change in action.

Carol and Tom need to begin to spend more time together, even if only in small increments. They need romantic evenings out or simpler quiet coffees after dinner. Carol's anxieties will lessen; her need for unproductive outlets will diminish. This will not happen over night. They have to take control of their time together – no talk of children, bills, or household tasks. The positive attitude has to be maintained. But slowly, slowly, real change will occur and the relationship will blossom.

Many couples I've worked with are trapped in this "attack-withdrawal" game. Let's summarize the tools that can help them:

With good will, good friends, good advice, hard work and the Almighty's help -- all couples can walk hand in hand with a sparkle in their eyes, until one hundred and twenty.

Why Do I Treat a Roommate Better than My Husband?

Shrinks on the Streets: Happy Marriages Require Spending Time with Your Spouse

Six Habits of Happily Married Couples
Saadiah Gaon, Rashi and Maimonides: How Three Rabbis Revolutionized Judaism
King Sennacherib and the Siege of Lachish
Three Small and Easy Changes to Add Positivity in Your Home
Comments
MOST POPULAR IN Family
Our privacy policy
Aish.com Is Looking for Great Writers