The Jewish Ethicist - Business with Friends 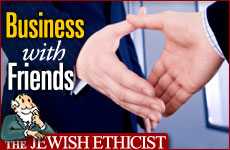 Even a friendly agreement should be carefully elaborated.

Q. A friend suggested I join him in a business deal. When I suggested a contract, he explained that we're good friends and a hand-shake is enough. Should I be suspicious?

A. You don't have to be suspicious of your friend, but you should certainly be prudent.

It's true that our sages tell us, "Always consider others as bandits, yet treat everyone with respect as Rabban Gamliel did." A stranger once sought hospitality at the house of the leading sage Rabban Gamliel; Rabban Gamliel took him in and treated him with honor, but also took away the ladder to the guest's attic room to prevent him from burgling the house. But as the passage goes on to explain, this applies mainly to a stranger. (1) Regarding a friend, it is more appropriate to judge him favorably, as we learn from the verse, "Judge your fellow with righteousness." (Leviticus 19:15.) While the plain meaning is an admonition to the judge to adjudicate righteously, our sages also learned from this verse that we should judge others favorably. (2)

However, our everyday enemies of carelessness, forgetfulness, and misunderstanding are enemies at least as great as deliberate fraud, and perhaps greater. In a few months, you will remember that he intended one investment, and he will remember another. You will recall that you were to get fifty percent, but he will be sure he promised you only forty. If you take your case to court, or even if you decide to make it non-adversarial and go to an arbitrator or mediator, the person will have nothing to go on.

The insight that even honest people are in need of carefully documented agreements is emphasized in the following Talmudic passage:

Rav Yehuda said in the name of Rav: Anyone who has spare money and lends it without witnesses, transgresses the prohibition "Don't put a stumbling block before the blind". Reish Lakish said, he brings misfortune on himself, as it is written (Psalms 31:18?) "Silence befall lips that speak untruth, who speak against the righteous". The rabbis said to Rav Ashi, "[The sage] Ravina fulfills all the stipulations the rabbis required. [Rav Ashi] sent him a message just before Shabbat came in, "Send me ten zuz [a sum of money], for I just found an opportunity to buy a piece of land. [Ravina] sent back, bring witnesses and write a deed. He sent to him, even me?! He sent back, you above all, for one who is absorbed in study comes to forget and brings misfortune on himself.

Rashi explains that the "stumbling block before the blind" is that the borrower may be tempted to deny the loan; "misfortune on himself" is that people will suspect him, the lender, of making a false claim when he tries to recover the loan in court. (3)

Ravina certainly did not suspect Rav Ashi of trying to cheat him. Even so, he points out that even the most righteous people can sometimes be absent minded, and insisted that even among the most trustworthy friends, all agreements should be clearly elaborated and carefully documented.

The Jewish Ethicist: The Angry Manager

The Jewish Ethicist: Charity and Providence
Bechukotai 5782: Divine Retribution
Behar 5782: Working to Live or Living to Work?
The Wholeness of Being Broken
Comments
MOST POPULAR IN Current Issues
Our privacy policy