Diamonds In Your Stroller 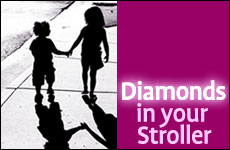 God is always watching His children. Are you?

The news that a four-year-old girl was recently kidnapped from in front of her home in Boro Park, where she had been left alone to play, should serve as a warning to parents everywhere, but is it heeded in our own community? Does such an incident serve as a catalyst for more vigilant adult supervision? Would a parent reconsider leaving a young child to play alone in the yard or in the care of an older but still very young sibling?

The story of four-year-old Madeline McCann, kidnapped from her hotel room at a vacation resort while her parents dined at a restaurant, should also serve as a warning. But has it influenced parents to change their behavior? Would parents perhaps now think twice before leaving their children alone in a hotel room while going downstairs to enjoy a Friday-night meal on a Shabbaton? I know of people who would not think to leave their jewelry within sight of their newly hired cleaning lady, but would not think twice about leaving their child with that same cleaning lady.

In the highly publicized abduction and murder cases of seven-year-old Megan Kanka and five-year-old Samantha Runnion, the children had been playing outside in daylight hours -- without the supervision of a trusted adult. In Samantha's case, she was playing with a friend in front of her southern California condominium when a man grabbed her and forced her into his car. Her friend immediately ran to tell her grandmother, but it was too late. In the case of New Jersey resident Megan Kanka, the seven-year-old was riding her bike when she accepted the invitation of a neighbor to see his new puppy. Once again, the child left to play without adult supervision was abducted, assaulted, and murdered just yards from her front door. Could the most horrific of crimes perpetrated against these innocent children have been prevented if they had not been left to play unattended? Only God knows, but as a parent it definitely makes me put forth maximum effort to ensure that my children are as safe as they can be within the parameters over which I do have control... even if it sometimes makes life less than convenient.

When we examine the concept of Divine intervention, it reinforces the fact that God is the Creator, Sustainer, and Supervisor of the entire universe. Does this fact mean that we do not have free will? Of course not, because God wants us to use the free will He has given us to make the right choices. And He gives us children as a responsibility to give us opportunities to do this. He actually doesn't give them to us; He loans them to us. And He expects us not to take that fact for granted. So because He runs the world, does that mean that we do not need to supervise our children because God is doing so? Or rather does it mean that because He is running the world, He entrusts us with His children, for us to supervise and protect and educate -- and that this is why He entrusted those precious souls to us in the first place?

Do our actions reflect the gratitude we have for the gift of our children?

Different states have different legislation pertaining to issues of child safety. New York and New Jersey have no clear-cut laws as to the age at which a child can be left unattended at home or at play, or entrusted with the responsibility to supervise other children. Other states are very clear and have consequences for violations. But regardless, as Jews, all of our actions are supposed to serve as an example for the rest of humanity. It is incumbent upon us to be introspective and be honest with ourselves. Do our actions reflect the gratitude we have for the gift of our children? How does it look to an outsider for a Jewish mother to go shopping and leave her baby alone in a stroller outside the store or in a car? If you gave someone a diamond bracelet and she left it outside on the street while she went into a store, would you feel that the gift was valued and appreciated, or easily replaceable?

For women who must work outside the home, the challenges are great in many areas, and less-than-ideal choices are often made solely by virtue of necessity. But for those who are fortunate enough not to be in the aforementioned position, is it worth risking the safety of your children because it is inconvenient to supervise your children at play or do yet another car pool? Is it reasonable to have a six-year-old supervising younger siblings outdoors while their mother cooks for Rosh Hashana? Is it also reasonable to have that same six-year-old walk home from school without adult supervision? Or is it just more convenient... for us?

No sane person would put his child in the middle of the street and feel confident that God would make sure nothing happened to him while he ran inside "just for a second." God expects us to use our free will to keep our children safe to the best of our ability, not always according to what is most convenient.

This article originally appeared in the 5 Towns Jewish Times

How to Raise Kids in a Digital World

The Stress of Modern Parenting

Cut to the Chase: The Secret to Raising Happy, Emotionally Resilient Children

The Love Mirror
Near Death Experience Panel
The Western Wall: The Heart of the World
Ask the Right Question: Tisha B’Av
Comments
MOST POPULAR IN Family
Our privacy policy
Aish.com Is Looking for Great Writers