LBJ: A Friend in Deed 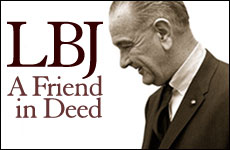 Lyndon Johnson's actions to rescue hundreds of endangered Jews during the Holocaust.

But the news report does little to reveal the full historical extent of Johnson's actions on behalf of the Jewish people and the State of Israel. Most students of the Arab-Israeli conflict can identify Johnson as the president during the 1967 war. But few know about LBJ's actions to rescue hundreds of endangered Jews during the Holocaust -- actions that could have thrown him out of Congress and into jail. Indeed, the title of "Righteous Gentile" is certainly appropriate in the case of the Texan, whose centennial year is being commemorated this year.

Historians have revealed that Johnson, while serving as a young congressman in 1938 and 1939, arranged for visas to be supplied to Jews in Warsaw , and oversaw the apparently illegal immigration of hundreds of Jews through the port of Galveston , Texas .

In 1915, the Ku Klux Klan in Texas threatened to kill the Johnsons.

A key resource for uncovering LBJ's pro-Jewish activity is the unpublished 1989 doctoral thesis by University of Texas student Louis Gomolak, "Prologue: LBJ's Foreign Affairs Background, 1908-1948." Johnson's activities were confirmed by other historians in interviews with his wife, family members and political associates.

Research into Johnson's personal history indicates that he inherited his concern for the Jewish people from his family. His aunt Jessie Johnson Hatcher, a major influence on LBJ, was a member of the Zionist Organization of America. According to Gomolak, Aunt Jessie had nurtured LBJ's commitment to befriending Jews for 50 years. As a young boy, Lyndon watched his politically active grandfather "Big Sam" and father "Little Sam" seek clemency for Leo Frank, the Jewish victim of a blood libel in Atlanta. Frank was lynched by a mob in 1915, and the Ku Klux Klan in Texas threatened to kill the Johnsons. The Johnsons later told friends that Lyndon's family hid in their cellar while his father and uncles stood guard with shotguns on their porch in case of KKK attacks. Johnson's speechwriter later stated, "Johnson often cited Leo Frank's lynching as the source of his opposition to both anti-Semitism and isolationism."

Already in 1934 -- four years before Chamberlain's Munich sellout to Hitler -- Johnson was keenly alert to the dangers of Nazism and presented a book of essays, Nazism: An Assault on Civilization, to the 21-year-old woman he was courting, Claudia Taylor - later known as "Lady Bird" Johnson. It was an incredible engagement present.

Five days after taking office in 1937, LBJ broke with the "Dixiecrats" and supported an immigration bill that would naturalize illegal aliens, mostly Jews from Lithuania and Poland. In 1938, Johnson was told of a young Austrian Jewish musician who was about to be deported from the United States . With an element of subterfuge, LBJ sent him to the US Consulate in Havana to obtain a residency permit. Erich Leinsdorf, the world famous musician and conductor, credited LBJ for saving his life.

GET AS MANY JEWS OUT

That same year, LBJ warned a Jewish friend, Jim Novy, that European Jews faced annihilation. "Get as many Jewish people as possible out [of Germany and Poland]," were Johnson's instructions. Somehow, Johnson provided him with a pile of signed immigration papers that were used to get 42 Jews out of Warsaw.

But that wasn't enough. According to historian James M. Smallwood, Congressman Johnson used legal and sometimes illegal methods to smuggle "hundreds of Jews into Texas, using Galveston as the entry port. Enough money could buy false passports and fake visas in Cuba , Mexico and other Latin American countries.... Johnson smuggled boatloads and planeloads of Jews into Texas . He hid them in the Texas National Youth Administration... Johnson saved at least four or five hundred Jews, possibly more."

During World War II Johnson joined Novy at a small Austin gathering to sell $65,000 in war bonds. According to Gomolak, Novy and Johnson then raised a very "substantial sum for arms for Jewish underground fighters in Palestine." One source cited by the historian reports that "Novy and Johnson had been secretly shipping heavy crates labeled 'Texas Grapefruit' - but containing arms - to Jewish underground 'freedom fighters' in Palestine."

On June 4, 1945, Johnson visited Dachau . According to Smallwood, Lady Bird later recalled that when her husband returned home, "he was still shaken, stunned, terrorized and bursting with an overpowering revulsion and incredulous horror at what he had seen."

A decade later while serving in the Senate, Johnson blocked the Eisenhower administration's attempts to apply sanctions against Israel following the 1956 Sinai Campaign. "The indefatigable Johnson had never ceased pressure on the administration," wrote I.L. "Si" Kenen, the head of AIPAC at the time.

As Senate majority leader, Johnson consistently blocked the anti-Israel initiatives of his fellow Democrat, William Fulbright, the chairman of the Senate Foreign Relations Committee. Among Johnson's closest advisers during this period were several strong pro-Israel advocates, including Benjamin Cohen (who 30 years earlier was the liaison between Supreme Court justice Louis Brandeis and Chaim Weizmann) and Abe Fortas, the legendary Washington "insider."

Johnson's concern for the Jewish people continued through his presidency. Soon after taking office in the aftermath of John F. Kennedy's assassination in 1963, Johnson told an Israeli diplomat, "You have lost a very great friend, but you have found a better one."

Just one month after succeeding Kennedy, LBJ attended the December 1963 dedication of the Agudas Achim Synagogue in Austin . Novy opened the ceremony by saying to Johnson, "We can't thank him enough for all those Jews he got out of Germany during the days of Hitler."

Lady Bird would later describe the day, according to Gomolak: "Person after person plucked at my sleeve and said, 'I wouldn't be here today if it wasn't for him. He helped me get out.'" Lady Bird elaborated, "Jews had been woven into the warp and woof of all [Lyndon's] years."

The prelude to the 1967 war was a terrifying period for Israel, with the US State Department led by the historically unfriendly Dean Rusk urging an evenhanded policy despite Arab threats and acts of aggression. Johnson held no such illusions. After the war he placed the blame firmly on Egypt: "If a single act of folly was more responsible for this explosion than any other, it was the arbitrary and dangerous announced decision [by Egypt] that the Strait of Tiran would be closed [to Israeli ships and Israeli-bound cargo]."

Asked why the US supported Israel when there were 80 million Arabs and only three million Israelis, he responded, "Because it is right."

Kennedy was the first president to approve the sale of defensive US weapons to Israel, specifically Hawk anti-aircraft missiles. But Johnson approved tanks and fighter jets, all vital after the 1967 war when France imposed a freeze on sales to Israel.

Israel won the 1967 war, and Johnson worked to make sure it also won the peace. "I sure as hell want to be careful and not run out on little Israel," Johnson said in a March 1968 conversation with his ambassador to the United Nations, Arthur Goldberg, according to White House tapes recently released.

Soon after the 1967 war, Soviet premier Aleksei Kosygin asked Johnson at the Glassboro Summit why the US supported Israel when there were 80 million Arabs and only three million Israelis. "Because it is right," responded the straight-shooting Texan.

The crafting of UN Resolution 242 in November 1967 was done under Johnson's scrutiny. The call for "secure and recognized boundaries" was critical. The American and British drafters of the resolution opposed Israel returning all the territories captured in the war. In September 1968, Johnson explained, "We are not the ones to say where other nations should draw lines between them that will assure each the greatest security. It is clear, however, that a return to the situation of 4 June 1967 will not bring peace. There must be secure and there must be recognized borders. Some such lines must be agreed to by the neighbors involved."

Goldberg later noted, "Resolution 242 in no way refers to Jerusalem, and this omission was deliberate." This historic diplomacy was conducted under Johnson's stewardship, as Goldberg related in oral history to the Johnson Library. "I must say for Johnson," Goldberg stated. "He gave me great personal support."

Robert David Johnson, a professor of history at Brooklyn College, recently wrote in The New York Sun, "Johnson's policies stemmed more from personal concerns -- his friendship with leading Zionists, his belief that America had a moral obligation to bolster Israeli security and his conception of Israel as a frontier land much like his home state of Texas. His personal concerns led him to intervene when he felt that the State or Defense departments had insufficiently appreciated Israel's diplomatic or military needs."

President Johnson firmly pointed American policy in a pro-Israel direction. In a historical context, the American emergency airlift to Israel in 1973, the constant diplomatic support, the economic and military assistance and the strategic bonds between the two countries can all be credited to the seeds planted by LBJ.

The writer served as deputy chief of mission of the Israeli Embassy in Washington. Today, an international consultant, he blogs at www.lennybendavid.com.

Those Who Can, Teach